PHOENIX (AP) — The body of a Russian rocket that burned up as it entered the Earth's atmosphere set off a wave of excitement on social media and fueled speculation over what caused the flash of light to shoot across the sky in the American West. The fireball seen over Arizona, Nevada and... 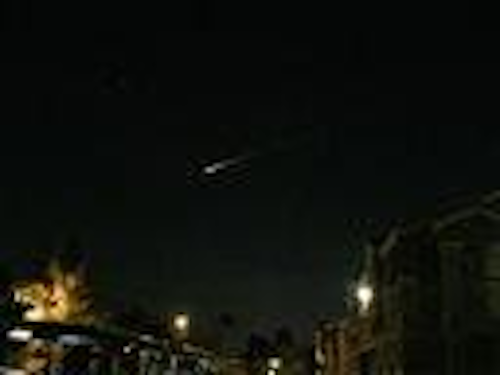 PHOENIX (AP) — The body of a Russian rocket that burned up as it entered the Earth's atmosphere set off a wave of excitement on social media and fueled speculation over what caused the flash of light to shoot across the sky in the American West.

U.S. and Russian officials declined to discuss the rocket's use, but experts outside the government say it was launched as part of a project to bring materials to a space station. They say the rocket's body likely detached from the craft taking items into space and burned up as it started to go out of orbit.

"It's not something people need to worry about," said David Wright, a space-debris expert who is co-director of the Union of Concerned Scientists.

An unmanned Russian cargo ship lifted off Monday from that nation's space launch complex in Kazakhstan on a journey to the International Space Station. The craft, which carried fuel, water, food and other supplies, has since docked at the station.

People who witnessed the burning light posted photos and video on social media, with some speculating that it was a meteor.

Others resorted to humor, punctuating their comments with a rocket emoji and saying the light across the sky looked Santa's sleigh. Some people expressed distrust about the U.S. government's comments on the rocket.

"I was kind of freaked out to see something like that blowing up in the air, and you don't know what it is," said Gunnar Lindstrom, who saw the streak of light as he got out of a car at his Las Vegas apartment complex.

He initially thought it was an airplane. Lindstrom, a bartender with a side business as a videographer, said his first instinct was to grab his cellphone camera.

"I was upset I couldn't grab my real camera," he said.

The flash of light is not unusual in portions of the Western United States, which offer an effective stage for sky shows.

Dark skies and few tall mountains make Nevada and northern Arizona a good spot to view the atmosphere at night, said Josh Bangle, a spokesman for the Lowell Observatory in Flagstaff.

Light pollution over major metro areas might make such a flash of light hard to see.

The same areas got a good view of a U.S. military missile test two weeks ago in New Mexico that produced a white contrail across the sky. Officials shared details about the launch with communities hundreds of miles away to cut down on the speculation.

The debris that burned up Tuesday was part of a rocket that's frequently used in the Russian space program, according to Hannah Thoburn, a research fellow at the Hudson Institute who specializes in the internal politics of Russia and Ukraine.

She also said it wasn't something that should stir concern, but she understands why some people would distrust the government's comments on the spectacle, given the heightened tensions between the United States and Russia.

"It makes sense that people are skeptical," Thoburn said.