A Treescraper was just named the Best Tall Building of 2015. 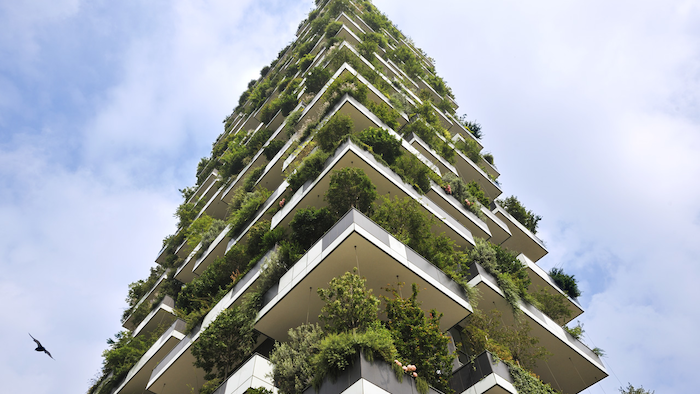 Treescrapers — or farmscrapers — that plant trees and other plants on the exterior of skyscrapers help envision a future of progress, blending development with environmental sustainability. Nonetheless, it seems like a long-shot to have high-rises dotted with deciduous trees in the mainstream.

But that architectural tide might be turning. Milan’s “Bosco Verticale” — meaning vertical forest — was just named the Best Tall Building of 2015 by the Chicago-based Council of Tall Buildings and Urban Habitat. The building was chosen from a pool of 123 entrants from 33 countries, including the One World Trade Center.

“Along with creating a beautiful appearance, the living green façade concurrently stimulates interaction with the surrounding environment while also protecting against it,” the CTBUH noted in a press release.  “The jury called this exploration of the viability of greenery at such heights groundbreaking.”

Bosco Verticale has two towers — one 382 feet tall and the other 279 feet — that are decked out with thousands of trees, shrubs and smaller plants in external concrete planters. The added foliage, designer Stefano Boeri says, absorbs more CO2, dust and noise.

The new building will be 383 feet tall and a hold a total of almost 10,000 square feet of greenery. On top of that, La Tour des Cedres will include a rainwater collection system, solar panels and ground source heat pumps to further the building’s mission of sustainability.

As the future undoubtedly holds more urban sprawl and ever-growing cities, some hope that this type of architecture can help balance the environment, potentially becoming an avenue for agriculture.

Drawbacks, however, include the need for increased strength in supports for those tree-holding balconies that might increase the “embodied” carbon emissions for construction. Other potential issues, such as higher heating costs caused by numerous balconies, will show how sustainable these buildings truly are through time.