The agency says the plant will provide about 8 percent of the region's drinking water. 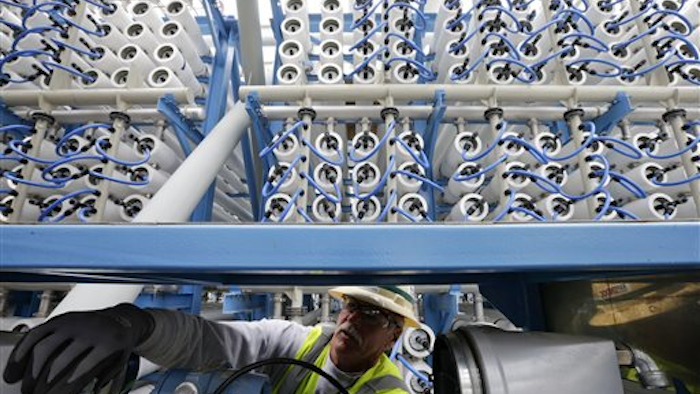 There's far more riding on the Americas' largest seawater desalination plant than the 50 million gallons of drinking water it will produce for the San Diego area each day.

The plant, which opens this year, will help determine the future of seawater desalination in the U.S. The billion-dollar project is only the nation's second major seawater plant. The first U.S. foray in Tampa Bay is widely considered a flop.

"You have to be able to say we did it there, it worked there," said Peter Beland, North America editor for Global Water Intelligence, which tracks the industry.

Huge by U.S. standards, Carlsbad barely cracks the International Desalination Association's list of 50 largest seawater plants, which are mostly in the Middle East. Its Israeli designer modeled it on one in Tel Aviv that produces nearly three times the water.

Tampa, which has half the capacity of Carlsbad, opened in 2007, a decade after it went to bid. Along the way, a key investor declared bankruptcy, its replacement failed to secure financing and the plant repeatedly failed performance tests.

San Diego County Water Authority officials vowed to "Tampa-proof" their effort, tapping experienced builders and getting developer Poseidon Resources LLC to shoulder much of the risk. In return, the Boston-based company will get a 9.66 percent return on investment, even more if it hits certain targets.

The plant uses a well-proven technology called reverse osmosis, which uses powerful pumps to shoot ocean water through 2,000 white fiberglass tubes to capture salts. First, silt and other solids are removed to prevent membranes from clogging — a task that hobbled the Tampa plant. Treated water is pumped uphill on a new 10-mile pipeline to San Diego's existing grid.

"Each element, each building block of the plant is something that has worked before elsewhere," said Avshalom Felber, chief executive of IDE Technologies, the plant designer. "That wasn't the case in Tampa."

San Diego began considering desalination in the early 1990s when drought exposed dependence on water brought hundreds of miles from Northern California and the Colorado River. It picked Carlsbad, a prosperous suburb of 110,000 people, because it could draw water from a power plant next door that uses up to 600 million gallons from the ocean daily to cool turbines.

Under a 30-year agreement, the regional agency will pay up to $2,367 an acre-foot, more than double what it will pay to import water next year from the Metropolitan Water District of Southern California. (An acre-foot supplies two typical households for a year.)

The San Diego agency says the plant will provide about 8 percent of the region's drinking water and raise the average monthly household bill about $5. Bob Yamada, its water resources director, said desalination "is not going to be a silver bullet that solves all of our problems" but has better positioned the region for drought.

Poseidon is pursuing an identical-size plant in Huntington Beach, positioning the Los Angeles suburb as California's next battleground.

In May, the State Water Resources Control Board adopted rules that may give developers pause. The state will prefer projects that tap the ocean under sand — often with angled pipes — which Poseidon says would be cost-prohibitive in Huntington Beach. The rules also limit salt concentrations of water that is discharged back to the ocean.

"I see extremely big difficulties in California," said Carlos Cosin, chief executive of Abengoa Water, a unit of Spain's Abengoa SA and a major plant builder. He considers regulatory frameworks in other parts of the U.S. and the world more favorable.

Coastal power plants in California are also ending or sharply reducing use of ocean water under new regulations to protect marine life, preventing desalination plants from piggybacking on their infrastructure, as Carlsbad will initially. Some new power plants are instead using air to cool turbines.

"Carlsbad was the horse that got out of the barn before we closed the doors but it's not going to happen again," said Joe Geever, a consultant to Surfrider Foundation, which unsuccessfully sued Poseidon.

Felicia Marcus, chairwoman of the state water board, said Carlsbad proves that large desalination plants can be built in California but is noncommittal on whether others will follow. She said Carlsbad is "quasi-grandfathered" under the new rules.

Carlsbad is already off to a better start than Tampa: Initially expected to open next year, it is well ahead of schedule.

"It's hard being a pioneer," said Ken Weinberg, who helped lead the San Diego agency's desalination drive until retiring this year. "They always say it's great to be second."