MX3D’s bridge will be made of a newly developed steel composite. 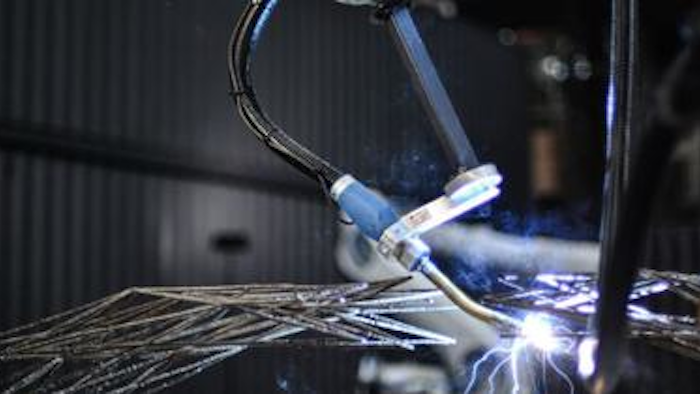 Now, Dutch research and development company MX3D plans to take a new 3D printing technique to the heart of Amsterdam by printing an ornate metal bridge over a downtown canal.

Designer Joris Laarman, who has been working with 3D printing technologies for more than 10 years, is spearheading the project. As an artist and furniture designer, he wanted to 3D print whole furniture; yet, after asking numerous 3D printing companies if they would develop a machine that could print a full-sized chair, he was left disappointed.

Creating a machine that could 3D print whole pieces of furniture proved to be problematic for the companies. “So we decided to just build [the printer] ourselves. We took an industrial 6-axis robot and attached different tools on it,” explains Tim Geurtjens, MX3D chief technology officer.

About three years ago, Laarman and his team developed an additive manufacturing method called MX3D Resin. The innovative extrusion technology and fast curing resin were able to form 3D objects on any surface, independently of its inclination and smoothness, and without any additional support structures.

Shortly after developing MX3D Resin, the team decided to go a step further by creating another multiple axis 3D printing tool known as MX3D Metal. The technology combines an industrial robot with a welding machine and software developed to drive the combination. The MX3D robot can print with metals, such as steel, stainless steel, aluminum, bronze, or copper without the need for support structures.

“We posted a clip online about our MX3D Metal technology about a year and a half back, and that drew a lot of attention,” says Geurtjens. “Autodesk was one of the entities that really became interested in us. They contacted us, and decided to support us in our development.” After giving it much thought, MX3D determined that the ultimate poster project for its metal 3D printing technology would be to print a metal bridge in Amsterdam.

The bridge project will ultimately be a metaphor for connecting future technology with the city’s historic past. However, this sentiment is easier said than done. In October, MX3D plans to open a 600 square meter test lot just north of Amsterdam. “There we will test all aspects and capabilities of the technique, and we will also print a full-scale test bridge,” explains Geurtjens. “Either we will move the bridge to location from the test lot, or we will print it live on location.”

Whether the bridge is printed on location is dependent upon the chosen site. Currently, MX3D has its sights set on a location in central Amsterdam. “It’s going to be really busy there, so it will be quite complex to print live on location because of regulation, safety, and security. We might have to completely rebuild the canal in our [test lot] and print there.”

Because the size and design of the bridge is largely reliant upon its future location, the design team hasn’t been able to plan out its exact parameters. According to Geurtjens, “The location we have our eyes on now would mean the bridge would have a span of about 10 meters. We don’t know the width yet, but pedestrians and bicycles need to be able to cross.” He estimates that the robots will need to work for about three to five months to print the bridge.

MX3D has teamed up with various sponsors and partners, including software company Autodesk and Dutch engineering company Heijmans. Autodesk, in particular, is providing technology and expertise to the MX3D team from conceptualization through production.

“This project is representative of what we believe to be the future of construction – a future that relies heavily on generative design and robotic fabrication technologies to solve complex design problems in efficient, safe, sustainable, and beautiful ways,” says David Thomasson, Autodesk principal research engineer.

MX3D has developed software that can drive the robots, in addition to developing software for the 3D printing technique itself. “We need to program the layer height that is printing and the time needed to cool down,” says Geurtjens. “About 70 to 75 percent of the development time is software combined with extensive testing."

Currently, the firm is in the process of building up an information library. Every test they perform is carefully documented and fed back into the software. Although the MX3D team is developing the software’s base themselves, they are also working closely with Autodesk to see if they can incorporate their software into Autodesk’s Dreamcatcher system.

“Dreamcatcher is an experimental generative design platform, which allows the designer to specify high-level goals and constraints, and then watch the algorithms iterate through hundreds or thousands of alternative solutions that all satisfy those inputs,” explains Thomasson. The designer then selects a final design based on his/her preferences. The process has some similarities to the way nature designs things, thus producing very organic looking forms.

In addition to Dreamcatcher, Autodesk is providing use of its Dynamo platform, an open source visual programming environment that serves as a platform for parametric control of various design tools, as well as advanced robot simulation and control. The software company is providing a variety of other design, reality capture, simulation, analysis, collaboration, and fabrication tools.

MX3D’s bridge will be built during the fall of 2017 and will be made of a new steel composite developed at the University of Delft. Two robots provided by robotics company ABB, along with welding tooling provided by Air Liquide will be used to heat up the metal to 1,500°C before welding the structure. The robots will then create their own rail-supports as they gradually 3D print across the canal.

Because this project will take place outdoors, it needs to be able to compensate for a range of errors, such as temperature fluxes, which may expand the metal. Consequently, the program will need to have real-time feedback loops and adapt in realtime, without being told to do so. “Positioning of the robots will also be challenging,” concedes Geurtjens. “We are looking into developing positioning systems for the robot, which link the physical position of the robot into the virtual design space.”

Despite these concerns, the MX3D team remains confident about keeping their project in the public eye. “We want to share this with people,” says Geurtjens. “You put a lot of pressure on yourself if you show the public everything you’re doing, but it also kind of stimulates us to do it right.”

With MX3D’s new 3D printing technique, the cost of complex architecture will no longer be an issue. For the robot, it doesn’t matter whether it’s printing a straight line or a complex geometric shape. Thomasson believes, “This project is heralding a new age for construction, where machine intelligence and robotic actuation will enable the creation of more human-centric designs with more freedom of form, faster build times, reduced waste, reduced energy usage, and increased safety.”

This article originally appeared in the October 2015 print edition of PD&D.