For some athletes the vehicles provide a respite for tired, overworked legs. 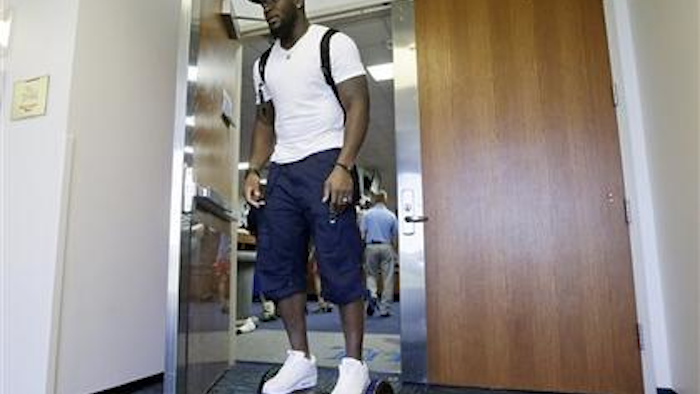 Titans defensive lineman Jurrell Casey zips out of the locker room on a motorized board heading to a meeting. San Francisco nose tackle Ian Williams rides around, stops to toss shoes into his locker and then hops right back on.

For some athletes the vehicles provide a respite for tired, overworked legs during the course of a busy football week. No matter the brand or nickname, the electric skateboard feature wheels on the sides and gives them a whole new way to get around.

"It looks like I'm in the middle of the cartoon 'The Jetsons' with everybody rolling around on them," said new Jets coach Todd Bowles, who banned the scooters after the preseason.

These aren't the large Segway-type vehicle used by the cameraman who crashed into Usain Bolt in China or that Katy Perry lost control of at the Burning Man festival. These feature wheels from 7 to 10 inches, and owners can customize colors. You can also add Bluetooth, speakers or remote starters, and the prices range from $400 to more than $1,000. Saints safety Kenny Vaccaro notes these are so much more advanced than larger vehicles.

"You can juke people with these," Vaccaro said. "I could dance on it, bro. (Segways) are not as smooth as these are. It takes a break out of just playing football. Sometimes you just want to ride. My feet hurt right now. I don't want to walk."

They've already popped up in Major League Baseball with a couple of Pittsburgh Pirates using them, while several members of the defending champion San Francisco Giants ride them in and out of AT&T Park.

Titans linebacker Brian Orakpo got his board as birthday gift from his wife at the beginning of training camp. He's gotten so comfortable he zips around the locker room, even conducting interviews with reporters while gently rocking back and forth to keep his balance.

"It's just fun," Orakpo said. "There's no benefit at all. Actually we're losing our steps you normally take every day ... and the calories you burn. It's just fun. We ride it to meetings, we ride it to lunch, breakfast, something to get off our feet man because we stay on these feet all the time, so this is a great invention to kind of get us off our feet for the time being."

Being an athlete certainly helps with riding these boards. Vikings wide receiver Cordarelle Patterson, who rode his around training camp, said he was comfortable from the start. Serious balance is required to make the board move pushing the foot or ankle forward. Marcus Rush, a linebacker on San Francisco's practice squad, tested cornerback Kenneth Acker's board in the locker room and isn't ready to buy one himself.

"My calves are burning," Rush said.

San Francisco cornerback Keith Reaser refused to go backward on Acker's board. That felt a little too risky.

"He's just not an athlete. He's not good at it," Acker cracked. "Once you get it down pat, though, it's pretty easy. It's balance. Once you find your center of balance it's like riding a bicycle. The hardest thing is getting on it and off it. If you put more pressure on one leg, you spin."

Now that the NFL season is underway, some players keep their boards at home because some team facilities are too cramped to use them.

Even though his own daughters have asked for the boards, Bowles compared allowing the boards inside the Jets headquarters to letting players use skateboards or bicycles at work.

"When the season starts, people can get hurt on those things," Bowles said. "When there's too many of them, you could start to have problems. So, for our team and in this building, it's better that we do without them."

The boards can reach speeds up to 12 mph. Orakpo said he almost face-planted while racing linebacker Wesley Woodyard, and Casey tumbled himself once. So far, Titans coach Ken Whisenhunt hasn't heard of any issues yet, though the coach says things can change.

With weight limits topping out at 325 pounds, this isn't the toy for some offensive linemen. Casey also doesn't want everybody in the locker room buying a board either.

"It'd be like L.A. around here if everybody had one — a lot of traffic," Casey said.