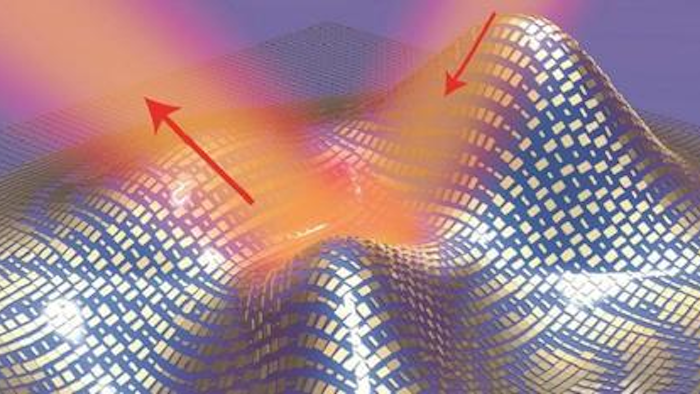 Researchers at the U.S. Department of Energy (DOE)’s Lawrence Berkeley National Laboratory (Berkeley Lab) and the University of California (UC) used a layer of gold nanoantennas to shroud a lumpy, microscopic three-dimensional object.  Its surface reroutes reflected light waves, essentially causing light to bounce off when the cloak is activated by switching the polarization of the nanoantennas.

Other high-tech materials have been used to make invisibility cloaks that work by making objects appear flat or scattering light.

The Berkeley study examined how red light struck an irregularly shaped object wrapped in the cloak. The object, approximately 1,300 square microns in area, reflected light in the same way as a flat mirror, rendering it invisible even to phase-sensitive detection. The cloak itself is only 80 nanometers in thickness.

“This is the first time a 3D object of arbitrary shape has been cloaked from visible light,” said Xiang Zhang, director of Berkeley Lab’s Materials Sciences. “Our ultra-thin cloak now looks like a coat. It is easy to design and implement, and is potentially scalable for hiding macroscopic objects.”

The team said that their cloak was thinner and more easily scalable than what came before. It also lacks a phase difference between the cloaked region and the background, which would make the cloak itself visible.

The metamaterials could be used in other technologies that involve the manipulation of light, such as high resolution optical microscopes or high-speed optical computers. At larger, macro sizes, the material could be used in 3D displays. The cloak already developed on the microscopic scale could also be used to hide the layout of microelectronic components or for other security encryption purposes.

“A phase shift provided by each individual nanoantenna fully restores both the wavefront and the phase of the scattered light so that the object remains perfectly hidden,” said Zi Jing Wong, co-lead author of the paper describing the research group’s findings. The paper, titled An Ultra-Thin Invisibility Skin Cloak for Visible Light”, was published in the journal Science.

The group, led by Zhang, focuses on metamaterials. These materials have optical properties which arise from their physical structure rather than their chemical composition, allowing them to circumvent the rules that usually govern the interaction of light with natural materials.

“Creating a carpet cloak that works in air was so difficult we had to embed it in a dielectric prism that introduced an additional phase in the reflected light, which made the cloak visible by phase-sensitive detection,” said co-lead author Xingjie Ni. “Recent developments in metasurfaces, however, allow us to manipulate the phase of a propagating wave directly through the use of subwavelength-sized elements that locally tailor the electromagnetic response at the nanoscale, a response that is accompanied by dramatic light confinement.”