GE offered a first glimpse at what the “digital wind farm” is going to look like. 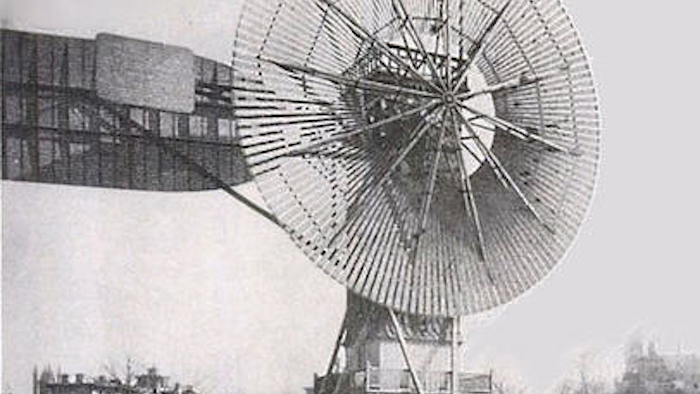 Few people embody the backyard inventor better than Charles Brush. In 1887, he built behind his mansion in Cleveland, Ohio, a 4-ton wind generator with 144 blades and a comet-like tail, and used it to power a set of batteries in his basement. Although by today’s standards the huge, 60-foot machine was massively inefficient, it started a new industry that pushed generations of engineers to make it better. Now GE has decided to go further and improve on the entire wind farm in one fell swoop.

“Every wind farm has a unique profile, like DNA or a fingerprint,” says Keith Longtin, general manager for wind products at GE Renewable Energy. “We thought if we could capture data from the machines about how they interact with the landscape and the wind, we could build a digital twin for each wind farm inside a computer, use it to design the most efficient turbine for each pad on the farm, and then keep optimizing the whole thing.”

GE calls the concept the “digital wind farm” and this week the company has offered the first glimpse at what it’s going to look like.

The concept has two key parts: a modular, 2-megawatt wind turbine that can be easily customized for specific locations, and software that can monitor and optimize the wind farm as it generates electricity.

GE says that the technology could boost a wind farm’s energy production by as much as 20 percent and create $100 million in extra value over the lifetime of a 100 megawatt farm. That value will come from building the right farm at the right place and then using data to produce predictable and power and further optimize the farm’s performance.

“The world’s electricity demand will grow by 50 percent over the next 20 years, and people want to get there by using reliable, affordable, and sustainable power,” says Steve Bolze, president and CEO of GE Power & Water. “This is the perfect example of using big data, software and the Industrial Internet to drive down the cost of renewable electricity.” Each digital wind farm begins life as a digital twin, a cloud-based computer model of a wind farm at a specific location. The model allows engineers to pick from as many as 20 different turbine configurations – from pole height, to rotor diameter and turbine output - for each pad at the wind farm and design its most efficient real-world doppelganger. “Right now, wind turbines come in given sizes, like T-shirts,” says Ganesh Bell, chief digital office at GE Power & Water. “But the new modular designs allows us to build turbines that are tailor-made for each pad.”

But that’s only half of the story. Just like Apple’s Siri and other machine learning technologies, the digital twin will keep crunching data coming from the wind farm and providing suggestions for making operations even more efficient, based on the software’s insights. Longtin says that operators will be even able to use data to control noise. “If there is a house near the wind farm, we will be able to change the rotor speed depending on the wind direction to stay below the noise threshold,” he says. The data comes from dozens of sensors inside each turbine monitoring everything from the yaw of the nacelle, to the torque of the generator and the speed of the blade tips. The digital twin, which can optimize wind equipment of any make, not just GE’s, gobbles it up and sends back tips for improving performance. “This is a real-time analytical engine using deep data science and machine learning,” Bell says. “There is a lot of physics built into it. We get a picture that feels real, just like driving a car in a new video game. We can do things because we understand the physics – we build turbines – but also because we write software.”

The digital wind farm is built on Predix, a software platform that GE developed specifically for the Industrial Internet. Predix can accommodate any number of apps designed for specific wind farm tasks – from responding to grid demand to maximizing and predicting power output. Says Bell: “This is the start of a big journey for the wind industry.“