GE scientists are working on a wearable, high-resolution imaging “helmet” that would allow doctors to observe the brain on the cellular level. The portable device could also allow doctors to study motor activity in the brain, since patients will be able to move around as their brains are being... 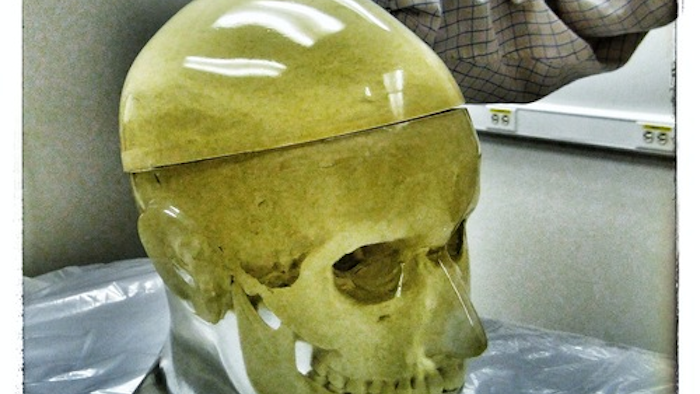 GE scientists are working on a wearable, high-resolution imaging “helmet” that would allow doctors to observe the brain on the cellular level. The portable device could also allow doctors to study motor activity in the brain, since patients will be able to move around as their brains are being imaged.

“If successful, this effort would represent a monumental advancement in imaging technology that will enhance the understanding of brain function both in normal and diseased states,” says Nadeem Ishaque, global technology director for diagnostics and biomedical technologies at GE Global Research (GRC).

The project is part of President Obama’s Brain Initiative, which he launched in April 2013. Its goals range from developing new ways to image the brain and study its function, to uncovering, treating and preventing brain disease and disorders like Alzheimer’s, autism and concussions.

In September, the National Institutes of Health announced that a group of businesses, universities, foundations and federal agencies would share $46 million from the program to “revolutionize our understanding of the human brain.”

The group includes GE,  as well as Google, the Simmons Foundation, the Defense Advanced Research Projects Agency (DARPA) and the Food and Drug Administration (FDA), according to The New York Times.

“The human brain is the most complicated biological structure in the known universe,” said Francis S. Collins, director of the National Institutes of Health. “We’ve only just scratched the surface in understanding how it works or, unfortunately, doesn’t quite work when disorders and disease occur.” GE is developing the helmet in partnership with the West Virginia University, the University of Washington, and the University of California-Davis. It will use positron emission tomography (PET) to reach down to the level of individual cells, and look for misfolded proteins and other signs of neurological disorders. “Today, many important classes of neurons and glial cells remain undetectable by imaging techniques because of their very low concentration,” Ishaque says. “This device could help us understand how brain circuits and networks work, and how they are organized.”

Unlike X-ray scanners and MRI machines, which image physical structures like bones and organs, PET detectors study the body’s functions. Doctors first inject patients with special tracer molecules that attach themselves to target tissues. Since the tracers contain radioactive isotopes, physicians can listen for their signals and measure their distribution. “You can spot cancer cells dividing this way,” says Ravindra Manjeshwar, who runs the functional imaging laboratory at the GRC. Indeed, PET is now mostly used to monitor the spread of cancer and response to cancer treatment.

But GE scientists have developed new classes of tracers that can zero in on neuroinflamation, which can be present during concussion, and amyloid plaque and tau proteins, which are thought to be associated with Alzheimer’s.

They plan to leverage the helmet’s super-sensitive hardware and software to reduce the amount of tracers needed for imaging. Ishaque says that such “micro-doses” would “reduce radiation exposure to patients to only about as much radiation as a cross-country flight, while still delivering high-resolution images.”

Manjeshwar says that the new technology could help scientists make “a quantum leap” in what they can detect in the brain. “We still know very little about the brain, and PET images are still very fuzzy and blobby,” he says. “But this technology could improve our molecular sensitivity by a couple of orders of magnitude.”

(GE is also pursuing brain research with the NFL as part of the Head Health Initiative. See here for more information.)