The Port of Cape Charles is a study in contrasts: A major manufacturer of concrete construction components is located next to a natural area that protects habitat of a small beetle. A new mega-yacht service facility is juxtaposed with work boats laden with commercial crab pots. But nowhere are... 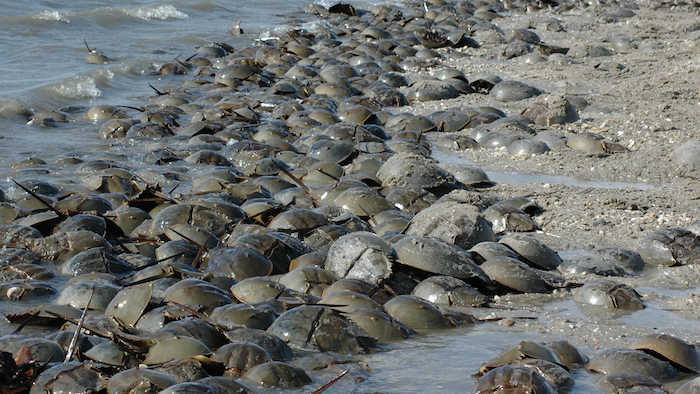 The Port of Cape Charles is a study in contrasts: A major manufacturer of concrete construction components is located next to a natural area that protects habitat of a small beetle. A new mega-yacht service facility is juxtaposed with work boats laden with commercial crab pots. But nowhere are the contrasts more stark than behind the doors of a modern building — the only one in the former Sustainable Technologies Industrial Park — where one of the earth's oldest creatures has risen to be the blue blood of the medical industry.

Wako Chemicals' Cape Charles facility extracts the naturally pale blue blood of horseshoe crabs and processes it to yield a protein used in the medical industry to test instruments, implants, and pharmaceuticals. It is one of four such facilities on the East Coast.

"Basically, anything that comes into contact with the blood is tested using LAL," or limulus amebocyte lysate, said site manager Christina Lecker. Limulus is from the scientific name for the horseshoe crab. Amebocytes are white blood cells in which the protein is found, and lysate refers to the method of extracting the protein from the white cells.

The protein isolates and coagulates around impurities, a protection mechanism scientists believe accounts for the exceptional endurance of the species, which have been around for hundreds of millions of years. Horseshoe crabs lack an immune system, and the ability to isolate impurities is vital for survival in bacteria-saturated environments, especially in the near-shore ocean habitat occupied during spawning season and as juveniles. During winter months, the crabs move out to deeper water, before returning again to spawn in May or June.

Although their hard exterior shells resemble those of crabs, horseshoe crabs are more closely related to spiders and scorpions. Undulating legs on its underside shovel food into the mouth in the center of the legs. Their appearance unnerves some, as it did Wako employee Shirley Goffigon when she first went to work there. When Goffigon tells people "I bleed horseshoe crabs" for a living, she understands their stares of disbelief, both from the novelty of her work and the repugnance some feel for the animal. "I was afraid when I started," she said, exhibiting no evidence of that former fear as she inspected, rinsed, and racked the day's crabs in the cooled intake room, preparing them for their involuntary blood donations.

Crabs are then taken into the lab, where about one-third of a horseshoe crab's blood is extracted in about 30 minutes. It generally takes the blood of two males to fill one specimen bottle, whereas females, which can be 25 percent larger than the males, can usually fill a bottle themselves. After the blood is taken, crabs are returned by the watermen suppliers to the coastal Maryland water from which they were taken under a biomedical permit. "The crabs are returned within 48 hours," Lecker said.

Donor crabs are marked with a small hole punch in the shell so they are recognizable to those in the intake room. If a marked crab shows up, it wins a temporary reprieve and is returned to the water without donation. But like real crabs, horseshoe crabs molt, and once in a new, unmarked shell, a crab can again be taken for donation. Blood volumes rebound within a few months. Estimates of mortality following blood extraction range from 8 to 15 percent.

Back in the lab, the LAL raw material — white cells containing the special protein — settles to the bottom of the processed sample. The blue plasma is skimmed off, and the remaining material is freeze-dried into the powder that is used in medical testing. "It's basically a process of refining, refining, refining," said Lecker. The final result: LAL reagent that is the universal standard ensuring medical equipment is free from bacteria. To test medical equipment, the items are first rinsed with sterile water. The LAL reagent is then added to the rinse water and observed for clots. "LAL can detect very fine quantities of endotoxins," she said.

Lecker suspects most patients are unaware how much of their high-tech medical safety they owe to the primordial horseshoe crab. "They have no idea how everything gets passed through the horseshoe crab test," she said.