The rupture of a nearly century-old water main that ripped a 15-foot hole through Sunset Boulevard and turned a swath of the University of California, Los Angeles, into a mucky mess points to the risks and expense many ... 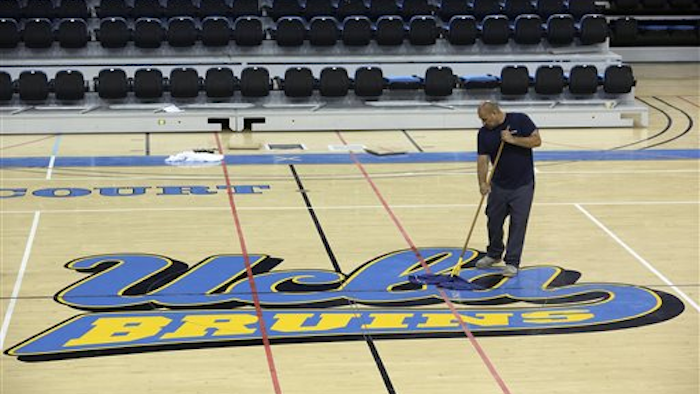 The rupture of a nearly century-old water main that ripped a 15-foot hole through Sunset Boulevard and turned a swath of the University of California, Los Angeles, into a mucky mess points to the risks and expense many cities face with miles of water lines installed generations ago.

The flooding sent more than 20 million gallons of water cascading from a water main in the midst of California's worst drought in decades and as tough new state fines took effect for residents who waste water by hosing down driveways or using a hose without a nozzle to wash their car.

Much of the piping that carries drinking water in the country dates to the first half of the 20th century, with some installed before Theodore Roosevelt was in the White House.

Age inevitably takes a toll. There are 240,000 breaks a year, according to the National Association of Water Companies, a problem compounded by stress from an increasing population and budget crunches that slow the pace of replacement.

"Much of our drinking water infrastructure is nearing the end of its useful life," the American Society of Civil Engineers said in a report last year, noting that the cost of replacing pipes in coming decades could exceed $1 trillion.

The association of water companies says nearly half of the pipes in the U.S. are in poor shape, and the average age of a broken water main is 47 years. In Los Angeles, a million feet of piping has been delivering water for at least 100 years.

When taps are running and swimming pools are brimming, no one pays attention to water lines, typically invisible underground. But the country has reached a point where vast lengths of pipe are wearing out at about the same time, said Greg Kail of the nonprofit American Water Works Association.

"Water pipes last a long, long time, but they don't last forever," he said. "There is a lot of pipe in the ground and there is an enormous expense, collectively, in replacing it."

The 30-inch pipe that burst Tuesday near UCLA shot a 30-foot geyser into the air that sent water down storm drains and onto campus.

The nearly century-old pipe was still gushing 1,000 gallons a minute Wednesday afternoon, but it was shut off completely by 9 p.m., some 30 hours after it stopped flowing, Los Angeles Department of Water and Power spokesman Albert Rodriguez said.

Rodriguez says workers had a giant inflatable plug at the ready to stop the flow, but it wasn't needed. Repairs were expected to take until Friday night or Saturday morning.

At its peak, water was gushing out of the break in the riveted steep pipe at a rate of 75,000 gallons a minute. The amount of water spilled could serve more than 100,000 Los Angeles Department of Water and Power customers for a day.

The pipe had been worked on before. While the cause of the break remained under investigation, Mike Miller, a district superintendent for the city Department of Water and Power, said the crack occurred near a connection where the 93-year-old water main joined a pipe installed in 1956.

The pipe must be dry for repair work to begin, but on Wednesday, leaky valves above the break allowed water to continue seeping in. Shutting off valves and pipes creates the risk of more ruptures in the 7,200-mile system, especially on hilly areas in and around campus.

The reputation of Los Angeles for producing the next new things in style and culture doesn't extend to its creaky infrastructure. The city is decades behind in repairs to cratered streets and sidewalks, and some of its water lines have been around so long that William Mulholland could have seen them going in.

Mulholland is the father of the Los Angeles Aqueduct, completed in 1913, that brings in water from 200 miles away and reshaped Los Angeles from a parched railhead into the nation's second most populous city.

Recent years have seen a series of pipe breaks that have prompted promises to expand repairs and replacements. There's been talk of a water rate increase to speed the work.

In 2009, several dozen breaks — one that sent up a gusher the size of Old Faithful — flooded streets.

There was disagreement on the cause, but one independent investigation found the culprit was a city law that rationed lawn watering for conservation. With residents restricted to watering only two days a week, pressure fluctuated in the city's water system, straining aging and corroded cast iron pipes until they burst, it concluded.

UCLA Vice Chancellor Kelly Schmader said 8 to 10 inches of water covered the basketball court and it showed some signs of buckling. The floor will be repaired or replaced as necessary and will be ready by the start of the basketball season this fall, Athletic Director Dan Guerrero said.

"The building itself has not been structurally compromised," he said in a statement.

On Wednesday evening, six men helping to pump out water from the pavilion were treated for exposure to carbon monoxide from a generator's exhaust, city fire spokeswoman Katherine Main said.

Two were taken to a hospital in fair condition and four were treated at the scene, she said. The generator was shut off and the building was aired out.

Despite the rupture, no utility customers were without water. No injuries were reported.

UCLA officials said six facilities were damaged and about 960 vehicles remained trapped, with many totally submerged.

The cost of the damage has not yet been determined. DWP spokesman Joe Ramallo said people who suffered damage from the flooding can file claims with the agency, which will work with UCLA on settling the losses.

A school official led a tour of DWP workers in hard hats through damaged areas Wednesday. They snapped photos and took notes.

Many students took the flooding in stride Tuesday, walking calmly across campus with their backpacks in ankle-deep water.

A day later, post-doctoral student George Saddik stood outside one of the garages where his SUV was parked on the bottom level.

Saddik, who had to spend the night at the home of a brother-in-law, said he was less concerned about his vehicle than about how he would commute to his home 50 miles away.

"I have insurance, so I'm not sweating it," he said.