The challenge targets two goals: reducing greenhouse emissions from generators producing steam used for extracting oil from the sands, and finding new ways to capture waste heat at the other end of the process. 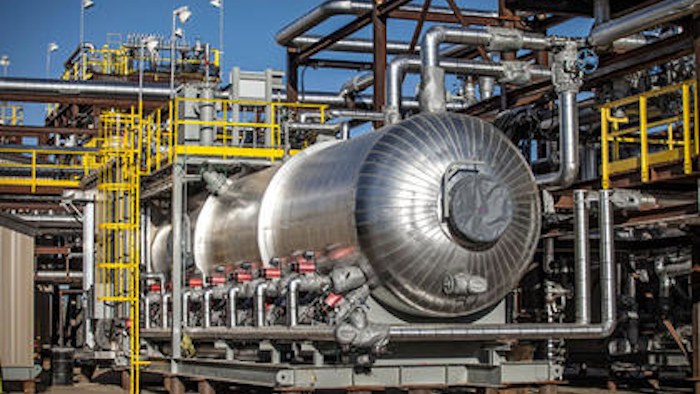 Extracting oil from oil sands generates copious amounts of low grade waste heat. Iguanas and bee hives have evolved unique mechanisms to efficiently turn thermal energy into something useful. “Many of the cleverest machines have a biological underpinning, and these two species are very good at maintaining and regulating their heat,” says Gregg, who is part of GE’s Global Research team in Alberta, Canada. “We are casting our net very wide.”

So wide that GE’s ecomagination program with technical support from other government and industry partners have launched an open innovation challenge with up to $1 million in cash and seed funding to improve the energy efficiency of oil sands extraction in Canada. Anybody in the world can participate.

The challenge targets two goals: reducing greenhouse emissions from generators producing steam used for extracting oil from the sands, and finding new ways to capture waste heat at the other end of the process. “Groups are taking big swings at ideas that are at least 10 to 15 years out,” Gregg says. “But we also need solutions that can be quickly and easily adapted for facilities already in the field.”

Gregg says that improving the efficiency of installed steam generators by 3 to 5 percent would have a tangible impact on the environment. “It’s not going to change the world, but we could roll it out fast and now,” he says.

Many oil sands operations harvest oil by using a process called steam-assisted gravity drainage (SAGD, pronounced sag-dee). The method injects hot steam into an underground reservoir holding natural deposits of a thick, oil-saturated sand. The steam softens the thick oil, allowing it to flow into wells where it is then pumped back to the surface. So-called “central processing facilities” then separate the produced oil and water, and recycle as much as 95 percent of the water for reuse in the process.

For the recycling to work, they must cool the water from 150 degrees Celsius down to 90 degrees. (Existing water treatment systems cannot process water above that temperature.) “Right now, that heat energy is lost,” Gregg says. “But we believe there must be some clever heat pump or other design out there to harvest it. That’s where we want the open innovation challenge to come in.”

Gregg hopes the participants will look to unusual places for inspiration. Like the marine iguana, for example. The lizard, which is native only to the Galapagos, cannot control its internal body temperature. This could be a problem when it hunts for food in the cool Pacific ocean. But the world’s only sea-going lizard evolved a system of vessels that quickly contract and expand and keep its temperature stable.

Honey bees are also very good at keeping temperature stable inside the hive, turning on the heat by gathering together and reducing it by fanning their wings. “I’d like to see some cool solutions,” he says. “No pun intended.”

The challenge to solve both problems has two stages. The winners will share up to $1 million in prizes and seed funding to further develop and commercialize their ideas. The first round of submissions is due on September 30, the second on March 15. You can find more details about the challenge and how to submit ideas on its website.