Japan Prime Minister Shinzo Abe is starting a three-day visit to California with plans to check out some of the region's tech innovations, lend support to expanded commercial ties, and even promote a Japanese-made bullet train. 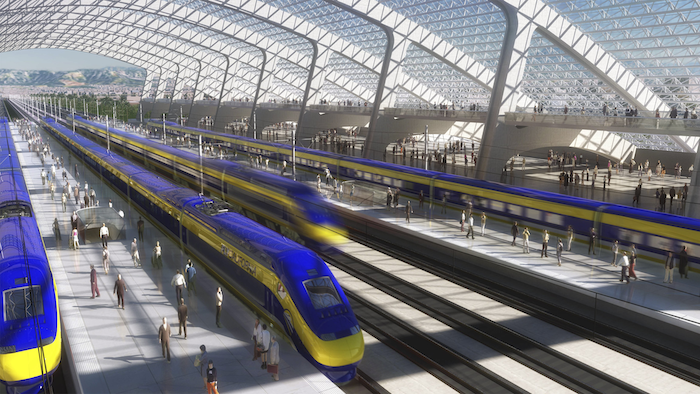 Japan Prime Minister Shinzo Abe is starting a three-day visit to California with plans to check out some of the region's tech innovations, lend support to expanded commercial ties, and even promote a Japanese-made bullet train during a meeting with the state's governor.

On a swing through Silicon Valley Thursday, Abe will speak with Stanford University experts about innovation and also work to build relationships with tech firms and investors. The head of one of the world's leading car producing nations will also visit electric carmaker Tesla Motors.

Traveling to San Francisco later in the day, the Japanese leader will meet with Gov. Jerry Brown and invite him to try the bullet train simulator that Abe is bringing, said Takako Ito, a foreign ministry spokeswoman. Brown has pushed for a $68 billion rail project that would connect San Francisco to Los Angeles.

Abe's California schedule includes a round-table with business leaders at a resort on Sand Hill Road, a busy stretch of street known as the epicenter of tech venture capital companies that have launched Amazon, Facebook, Twitter and more. He will go to Stanford for a speech and meetings with Japanese foreign exchange students, followed by visits to social media giant Facebook, and the offices of Tesla Motors, whose electric cars are built in a nearby plant first opened by General Motors more than 50 years ago.

"This Japanese administration has been focusing on changing its economy to a growth-based system built on innovation," said Japanese economic researcher Takeo Hoshi, a senior fellow at Stanford University's Freeman Spogli Institute for International Studies. "This is probably the best place in the world to look at that."

The 1,854-square-mile region, including San Francisco and its peninsula stretching south to San Jose, is home to Google, Apple and other leading tech firms which help drive the U.S. economy. Today the economy is booming; last year the average annual earnings were $116,000, compared to $61,000 nationally. Venture capitalists invested $14.5 billion in businesses and 76,450 new jobs opened up.

During his three-day visit to California, Abe will meet with Japanese-Americans in San Francisco and Los Angeles, encourage Japanese students studying in the state and announce policies to facilitate U.S. investment in Japan, Ito said.

Earlier in the week Abe made the Washington D.C. rounds with a White House dinner and a Congressional address.

While on Capitol Hill on Wednesday, Abe declared "history is harsh" and offered condolences for Americans who died in World War II. He stopped short of offering an apology sought by U.S. lawmakers for Japanese conduct during the war, including sexual enslavement of tens of thousands of Asian women by Japan's imperial army.

Congressman Mike Honda, a Japanese-American democrat representing the Silicon Valley, was among those pressing for a direct apology.

Abe's "refusal to squarely face history is an insult to the spirit of the 200,000 girls and women from the Asia-Pacific who suffered during World War II," said Honda on Wednesday.