Audi Runs On Green Diesel For The First Time 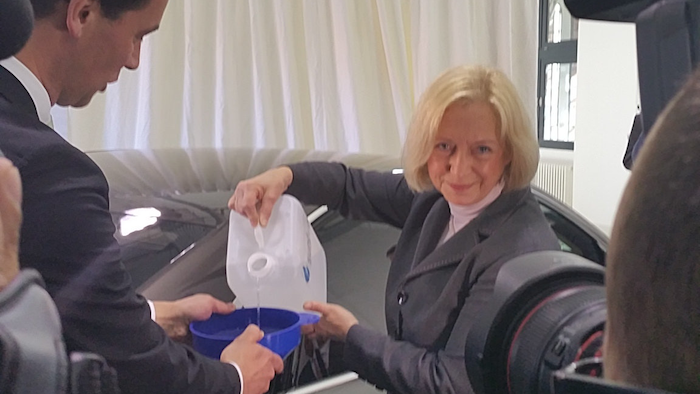 The fuel, called Blue Crude, begins life as steam in Sunfire’s factory in Dresden. The steam is split into hydrogen and oxygen by hydrolysis. The carbon dioxide (sourced from the air) is turned into carbon monoxide, which is then combined with the hydrogen to create hydrocarbons. The steps themselves are not new, but the method has optimized the ability to produce fuel at an industrial scale through hydrolysis. The core of this three-step process is the reversible electrolysis (rSOC,) which is based on the Solid Oxide Power Core and generates hydrogen with an efficiency of 90 percent.

Sunfire expects the fuel to be able to hold a retail price of between €1 and €1.50 per liter (between $1.10 and $1.65 per liter, or about $4.15 per gallon), depending on the price of electricity. The relatively high price may be a tradeoff for more efficiency: the octane number is very high, about 70, and the fuel is still completely without emissions, as it does not contain any sulphur or fossil oil.

The Sunfire plant isn’t just a place to produce this kind of fuel, though. After a short turnaround period, the process can run both ways; electricity can be turned into liquid fuel, or liquid fuel can be turned into electricity, turning the factory into a power station. The plant itself is an energy converter, von Olshausen said. The development of the fuel began in 2012, he said, but the pilot plant has only been running for a few weeks.

This power-to-liquids technology reaches system efficiencies of about 70 percent. It can produce up to 1,601 liters (42.2 gallons) of Blue Crude per day, and Sunfire is ready to expand into a bigger plant.

“If we get the first sales order, we will be ready to commercialize our technology,” von Olshausen said.

The first customer was Prof. Dr. Johanna Wanka, the German Federal Minister of Education and Research. The Audi A8 in which the fuel was tested was her official car.

Sunfire was supposed by the Ministry of Education and Research and several corporate venture capital companies in this endeavor, including Bilfinger Venture Capital, Total Ventures, KfW and Electranova Capital.