'Cards Against Humanity' Theme Pack To Benefit Women In STEM

Recipients of the Cards Against Humanity Science Ambassador Scholarship will receive full tuition coverage for up to four years. I spoke with the “Science Pack” co-creator Zach Weinersmith about the game and why supporting women in STEM matters. 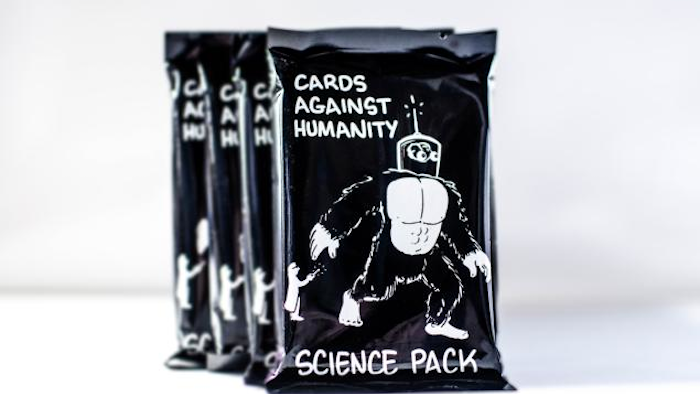 Cards Against Humanity, the notorious card game, bills itself as the “party game for horrible people” and rightly so. For those unfamiliar with the game, consider it an R-rated version of Apples to Apples.

But this week, CAH did something decidedly not horrible when they announced a science-themed expansion pack whose proceeds would benefit women seeking degrees in STEM-related fields. Recipients of the Cards Against Humanity Science Ambassador Scholarship will receive full tuition coverage for up to four years, and applications will open for the 2016 school year.

Curious to know more, I spoke with the “Science Pack” co-creator Zach Weinersmith about the game and why supporting women in STEM matters.

Abbey Dean (AD): Why the decision to form a scholarship for women seeking degrees in STEM?

Zach Weinersmith (ZW): Cards Against Humanity came up with the idea and, of course, I was very enthusiastic. The nice thing about it is that we’re trying to hit the problem where it lives. A lot of pro-women-in-STEM projects involve a lot of talking, but action is scarce. In this case, we’re actually making sure a real person goes through with a STEM career.

AD: Why is introducing more women into STEM important to you?

ZW: In general, something like parity is a good thing. That would at least suggest that more people are living lives where they fulfill their big aspirations. Selfishly, I’d like more people in tech and science, because I like science and tech. I also have a daughter who might want to follow in her mother’s footsteps. So, for her sake, I’d like to see less stigma about girls doing science.

AD: There’s something ironic about the game that bills itself as a “party game for horrible people” donating the proceeds toward helping women advance their education. Thoughts?

ZW: Ha! Yeah, that might be true. But my sense is that the CAH guys have a “with great power comes great responsibility” view of the situation. Plus, if it really is horrible people playing the game, they’re taking money from horrible people and giving it to good people. It’s genius!

AD: What was your main goal as co-author of the “Science Pack”?

ZW: To make it funny! If people learn something or help someone, that’s great. But, when it comes to projects, I think it’s always best to keep your main goal in mind.

ZW: I’d like to see more companies doing similar forms of outreach. Most outreach is, necessarily, talking about problems. That’s great, and it has its place, but actually financing action is often hard to come by. You might have noticed that this pack is getting a ton of publicity, which shows that good behavior is good PR. I wish more businesses understood this.