Palcohol's go-ahead from the FDA is an about-face from the bureau's previous stance. 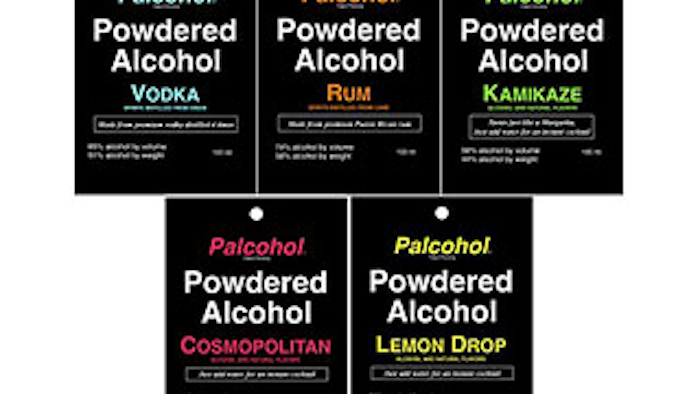 The powdered alcohol product, called Palcohol, has received the green light from the Alcohol and Tobacco Tax and Trade Bureau. Intended to be mixed into drinks, the approval is an about-face from the bureau’s previous stance.

Briefly last year, the federal agency gave the okay for the product before the bureau backtracked and said the label approvals had been given in error. But this week, bureau spokesman Tom Hogue told The Associated Press the issues were resolved and that four varieties of Palcohol were approved.

Federal approval of Palcohol doesn’t interfere with legislation by six states have already placed bans on powdered alcohol since states regulate sales in their borders.Just last week, efforts to add Colorado to the list of states with restrictions on powdered alcohol ran aground in the state Legislature.

Lipsmark LLC, the privately held company and the owner of Palcohol, sees the product as a handy way to have alcohol for outdoor activities, as well as travel and hospitality applications because of its convenience and lightweight nature. It also has plans for a non-ingestible industrial formulation that could be used in medical, manufacturing and energy applications.

According the company website, most of the previous media coverage has focused on perceived negative aspects of powdered alcohol, leading to the bans. In turn, the company has addressed those statements:

1. People will snort it and get drunk. Not true. It's painful to snort due to the alcohol. Second, it's impractical. It takes approximately 60 minutes to snort the equivalent of one shot of vodka. Why would anyone do that when they can do a shot of liquid vodka in two seconds?

2. Powdered alcohol will make it easier to sneak into venues. A package of Palcohol is 4" x 6"....almost five times bigger than a 50ml bottle of liquid alcohol so Palcohol is much harder to conceal. Alcohol in any format is subject to abuse if someone is determined to do so. Nothing prevents a criminal bent on violating the law from pouring liquid alcohol from its original package into a water bottle, a lunchbox thermos, a hip flask, etc. for surreptitious consumption.

3. It will be easier to spike a drink. Not true. Palcohol does not dissolve instantly in liquid and would take over a minute of stirring to dissolve the equivalent of one shot of alcohol into a drink when one can spike a drink with liquid alcohol in about three seconds. Please view the video for a demonstration.

4. Kids will get a hold of it easier. Not true. Palcohol is sold wherever liquid alcohol is sold and the same rules apply, you must be 21 years or older to buy it.

According to the Palcohol website, founder Mark Phillips noted the approval of his product and hopes to have the product for sale this summer.