Scientists have proven that harvesting spider silk proteins from goat’s milk works. But a new crop of companies working to commercialize synthetic spider silk, such as Sweden’s Spiber Technologies AB, are moving beyond “spider goats.” 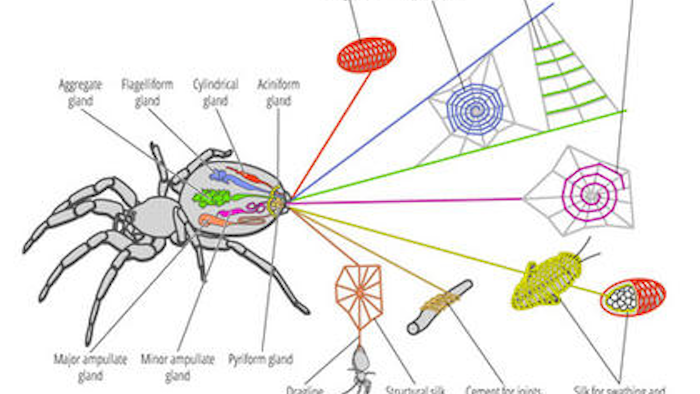 If you live in a house, one of the most amazing materials known to humans is likely languishing in a dark corner of your basement. Spider webs and especially the draglines that form their structure are made from silk threads extruded by arachnids that can be several times tougher than Kevlar and stronger than steel by weight, but also extremely stretchy. Spider silk also has anti-bacterial properties, which may have led Greek and Roman soldiers to use it as wound dressing.

The idea of farming spiders for their silk, however, sounds like a nightmare in more ways than one. “Spiders are very difficult to farm,” observed the BBC. “They are predatory and will readily resort to cannibalism in the absence of other prey.”

But in 2002, a group of Canadian scientists came up with a terrific new idea. They transplanted spider genes coding for dragline silk proteins into goat cells, which expressed the silk in the goat’s milk.

Scientists have since proven that harvesting spider silk proteins from goat’s milk works. But a new crop of companies working to commercialize synthetic spider silk, such as Sweden’s Spiber Technologies AB, are moving beyond “spider goats.”

The Stockholm-based biomaterials company is using genetically engineered bacteria and GE protein purification technology to produce large quantities of the so-called spidroin proteins found in dragline silk, and then customize them for a variety of specific purposes.“Man-made spider silk can be adjusted to contain specific parts that bind to cells and promote wound healing, thereby enabling use within fields of tissue engineering, diagnostics and cell culture,” says Kristina Martinell, Spiber’s production director. “In short, it’s a tailor-made biomaterial.”

The team at Spiber starts by selecting a portion of the gene sequence spiders use to express spidroin. They clone the genes into E. coli bacteria (see below), rather than goats, and grow the microbes in a bioreactor. Next they use a protein purification system developed by GE Healthcare Life Sciences to purify the proteins for medical use and other life sciences applications.

Spiber’s product development is similar to the process faced by pharmaceutical companies, Martinell says. The team had to scale hurdles such as learning to manage the “stickiness” of spider silk protein. “This protein, in its nature is a bit sticky,” she explains. “It has to be treated very carefully according to a specific method.”

Back in 2011, when Spiber and GE started working together, GE got a chance to test the technology on Spiber’s new sample of proteins, and Spiber used it to evaluate the process. “As a small company, we are excited to have access to GE’s equipment and promising knowledge,” Martinell says.

Over time, the company’s technique has evolved to keep the material soluble until it is ready to be shaped into the arrangements needed for various applications

Spiber can now manufacture spider silk fiber, film, foam and even mesh. The company says that the material is as strong as mammalian tendons and remains stable at boiling temperatures of up to 267 degrees Celsius (512 Fahrenheit).

As a result, the range of potential products is huge.  The company is working to apply spider silk in several medical fields, including cardiology, heart tissue regeneration, bone reconstruction, skin cell growth and vaccines.

Who’s to say that we won’t be able to engineer a certain superhero one day.