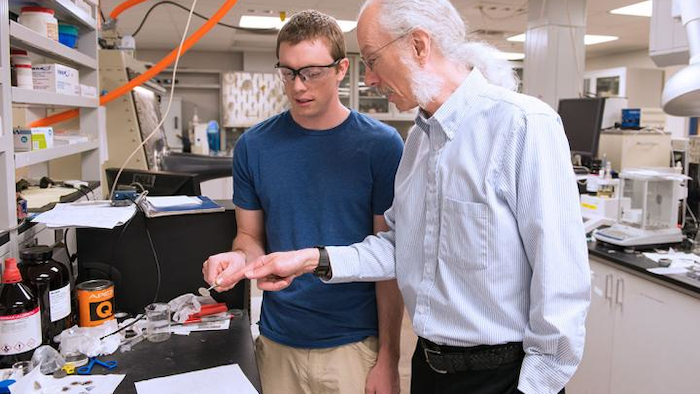 Now, researchers at Arizona State University are exploring new energy storage technology that could give the battery an even longer life cycle.

The work he contributed to this study was performed while he was on an internship at Boulder Ionics working at both Boulder and ASU with Watkins. Olsen is currently a doctoral student at the University of Washington, Seattle.

"We used a device called a quartz crystal microbalance to measure very tiny mass changes in thin films at the surface of the battery material during charging and discharging," said Buttry. "One of the key features of successful lithium battery materials is that they develop thin films that protect the surface of the battery electrodes, which prolongs the life of the battery. This study documents the development of just such a film in a new type of battery formulation that has many more attractive features than existing commercial lithium batteries."

Buttry added: "The hope is that this new formulation will find its way into commercial use."

The work is part of a larger effort in Buttry's lab that has included funding from the Advanced Research Projects Agency - Energy (ARPA-E) and now from the Army Research Office.

"These were not trivial measurements to make because composite films (meaning a film of the active material in a polymer matrix) are often difficult to use with a quartz crystal microbalance," said Watkins. "Most, if not all, quartz crystal microbalance studies of this sort use very thin films of the active material alone, which means specialty deposition methods must be used. What was cool here is that we were able to make the measurement on a more practical film, something you might realistically see in a commercial battery."

"This study brings home the fact that energy storage technology still has a lot of room to run, with new technological changes coming at a fast pace," says Buttry. "This is important when considering areas where storage is important, such as grid storage and electric vehicles."

According to Watkins, there are a multitude of reasons why modern society demands more energy dense batteries.

"For some time, silicon anodes have been proposed as replacements for the carbon based anodes found in current state-of-the-art devices as they could potentially give energy densities almost 10 times that of modern anodes," Watkins said. "This exciting collaboration could bring us one step closer to realizing more energy dense batteries with silicon anodes."