Sophie Allport, a designer of fine bone china, is one manufacturer waiting for the future monarch's name to send her commercial plans into motion. She has thousands of pre-orders for hand-crafted commemorative mugs but can't fill them until the baby's name can be etched on the rims. 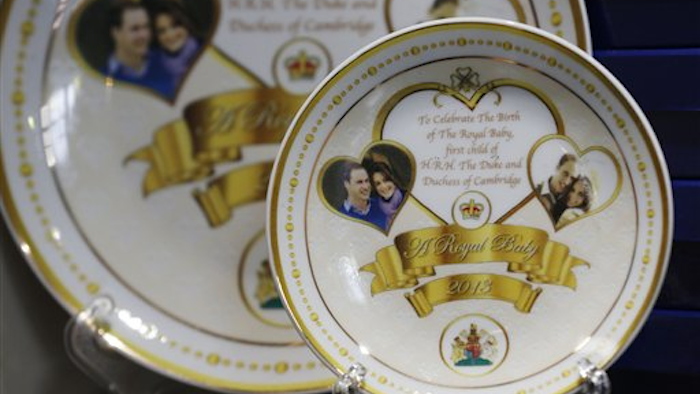 LONDON (AP) -- It's a royal bonanza — but for Britain's souvenir makers, also a royal headache.

The upcoming birth of Prince William and his wife Kate's first child is a golden opportunity that comes with a mystery: the name and gender of the baby.

It all means that, while merchants have known for months that the future heir to the throne is due in mid-July, they'll be sent into a mad dash to create, or at least put finishing touches on, royal baby memorabilia.

Sophie Allport, a designer of fine bone china, is one manufacturer waiting for the future monarch's name to send her commercial plans into motion. She has thousands of pre-orders for hand-crafted commemorative mugs but can't fill them until the baby's name can be etched on the rims.

She's as ready as she can possibly be — having prepared both blue and pink designs depending on whether it's a prince or princess.

"We've never done something like this so I hope it works," said Allport, whose designs, once written, will be scanned, mailed or even driven by courier to the city of Stoke-on-Trent, the center of Britain's ceramic industry.

Be it Alexandra, George or Elizabeth, or any of the other names touted as possibilities, Stoke-on-Trent's workers will then apply Allport's designs to 10,000 mugs, which then will be fired in huge kilns and finished with a ceramic glaze.

Francis Morrall, deputy chief executive of the British Ceramic Confederation, said many designers have just left a small gap on their designs for the baby's name, gender and date of birth.

"All of the designs will have been prepared months ago," he said.

Other manufacturers have taken a different approach, opting for gender-neutral baby-themed merchandise, from "I Love Uncle Harry" baby bibs to "Born to Rule" baby clothes.

Stoke-on-Trent's numerous ceramics factories will become a hive of activity following the baby's arrival, churning out commemorative plates, cups, and mugs in British red-white-and-blue to satisfy royal fans at home and abroad.

The potential market for memorabilia will also include the throngs of international visitors who come to England each summer, including many who visit Buckingham Palace, Windsor Castle, and other royal haunts.

Kimberly Sheridan, an Israeli student visiting Britain with a friend, said she does not plan to go home empty-handed.

"Something associated with the royal baby would be the perfect souvenir from our time here," the 21-year-old said. "We were really excited when we found out we'd be here when the royal baby arrives, so a royal baby souvenir would be really cool."

Britain's ceramic industry has experience responding to instant demands for commemorative memorabilia. Just this week it mobilized to create souvenirs celebrating Andy Murray's triumph at Wimbledon, which ended a 77-year drought in British men's singles winners at the tournament.

Dave Lockett, owner of Edwardian China, said that Wimbledon was a piece of cake compared to a royal birth. In sports, at least you know when the big day is and who might be celebrated. The questions surrounding the royal baby, he said, will push factories to the limit.

"They'll type in the name and press go," said Lockett, whose factory runs with up to 100 staff when working on orders with tight deadlines.

Entrepreneurs from other countries are also eager to get in on the act. In fact, as little as a quarter of royal baby products — from T-shirts to teddy bears — will be made in the U.K., with the rest shipped from overseas factories working overtime to meet global demand, said the retail research center's Joshua Bamfield.

In China, factories are standing by.

Tangshan Hengrui Ceramics, which produced 50,000 commemorative plates to mark William and Kate's marriage, is prepared to give special treatment to the royal birth.

"It usually takes a couple of months to get our products to the U.K.," said Tangshan spokeswoman Joanna Cui. "But if it's something like a royal birth we can get it done in a much shorter time."