Syrian merchants and factory owners have rented apartments in the Lebanese capital as well as Dubai and Cairo. Many skyscrapers dotting Lebanon's famed Mediterranean corniche are known to have been rented out to Syrians at exorbitant prices. 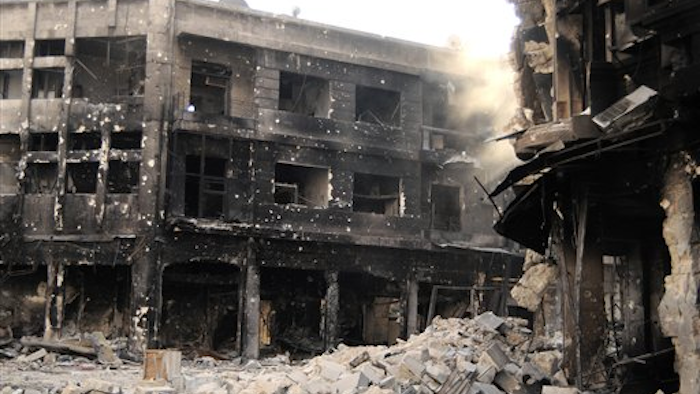 BEIRUT (AP) -- With the Syrian civil war edging closer to Damascus, the capital's business elite long cultivated by President Bashar Assad as a support for his regime is starting to join the exodus from the country.

Popular restaurants and high-end stores in Damascus have shut down as their owners move to Beirut and reopen there. They become the latest part of the flight of the Syrian upper class, thousands of whom are believed to have moved abroad over the past year, mainly to Lebanon, Turkey and the Gulf.

Syrian merchants and factory owners have rented apartments in the Lebanese capital as well as Dubai and Cairo. Many skyscrapers dotting Lebanon's famed Mediterranean corniche are known to have been rented out to Syrians at exorbitant prices.

Most still largely back Assad and hope to return, but their flight is a sign of the deep worry over the direction the fight has taken.

"Most people in Damascus have lost hope," said Reema, a chemical engineer. She fled the capital last summer and now lives in Beirut, managing a factory in one of Damascus' industrial zones remotely, via Skype. At first, "we could hear the bombs from around Damascus but we knew that they were far away so we got on with our lives ... Now, the war is everywhere."

She said she has seen a new influx of Damascus residents into Beirut and expects more to come once schools go on summer vacation and well-off Damascene families feel freer to pack up. Reema spoke on condition she be identified only by her first name for fear of reprisals against her business or collague still in Syria.

"Some who have been coming back and forth between Beirut and Damascus are giving up and want to stay to avoid the hassles of checkpoints and ID checks and fear of being taken by groups who just pick people up from the streets," she said, adding that residents blame both regime and opposition-linked groups for disappearances.

Several other businessmen who fled more recently to Beirut spoke to The Associated Press of growing numbers of the elite choosing to leave for the time being. But they refused to give details or be quoted because of worries over their enterprises back home.

The extent of new departures was impossible to confirm. The Damascus area has seen some waves of violence previously over the past two years. But in the past few months it has intensified, with heavy fighting in towns and villages on the capital's outskirts and frequent barrages of rockets and mortars into the city itself. The industrial zones in Damascus are largely protected by government troops. But crippling security measures and a network of checkpoints slow down industry. Lack of electricity and a spike in kidnappings of wealthy residents is also prompting some to move abroad.

More than 1 million Syrians have fled the country to escape the civil war, now its third year. The bulk of them are poor, largely from the country's Sunni Muslim majority that makes up the backbone of the rebellion, leaving homes battered by fighting between rebels and regime forces around the country and crossing into Jordan, Turkey or Lebanon.

Syria's powerful and monied elite have long had a complicated history with the regime. The rich and powerful industrialists, merchants and factory owners are mostly secular Sunni Muslims, mainly from families who were largely allowed to operate in Aleppo, Syria's economic engine, and in Damascus, without government interference while the Assad family's Alawite sect, an offshoot of Shiite Islam, kept its grip on political power.

When the uprising against his rule erupted in March 2011, most stuck by the president. That support has been strained by two years of bloodshed that has killed an estimate 70,000 people and disrupted business and life. But many deeply distrust the rebels because of the strength of Islamic hardliners and the lack of a cohesive leadership.

"With the fighting ripping apart the social fabric of cities, the elite is increasingly very confused because they can't support the regime any more but also cannot embrace the rebels, who are looking to take over their properties," said Joshua Landis, a Syria expert at the University of Oklahoma.

Syria's urban elite has been concentrated in the northern city of Aleppo and the capital Damascus. Most of the rebels come from the underdeveloped countryside — poor, religiously conservative and angry over years of economic marginalization they say was enforced by the old merchant families and regime-linked industrialists.

The first waves of the elite leaving came last year, from Aleppo and the central city of Homs. Now, industrial zones in those cities packed with textile, plastics, pharmaceutical and cosmetics manufacturers stand virtually deserted.

Aleppo, the country's largest city, became a battle zone last summer when the rebels launched an offensive there. Since then, it has been torn apart by months of grinding urban warfare that has devastated the city and left it carved into rebel- and regime-held zones.

Even before the fighting started in Aleppo, businessmen say rebel fighters from the countryside came to factories demanding the owners pay up.

The owner of an Aleppo plastics factory said that about a year ago, rebels came and told him, "You need to support our revolution or your factory will burn down." He negotiated with them and they walked out with a safe containing 400,000 Syrian pounds, about $5,700.

Three months later, he locked the factory doors and moved to the United States, managing his businesses from there. He spoke on condition he be identified only by his first name, George, fearing harassment of his family and his associates, who still travel to Syria from Lebanon and Turkey.

George and his father, who has moved to Turkey to set up a business, pay rent on an apartment in Beirut for George's sister, he said.

George said the "class component" of the revolution became impossible to ignore. To the rebels, "there was 100 percent correlation between the regime and the rich," he said. "Having money meant you were in bed with the regime."

Few industrialists in Damascus and Aleppo have entirely shut down their business, choosing instead to run them remotely in hopes fighting will subside and they can return.

"For us to go back, the government would have to win this decisively and put business where they were," George said.

Most of the business community is in a "wait and see mode," said Ayham Kamel, a Middle East analyst at the Eurasia Group in London.

"The Syrian business community still views its role in the rebuilding Syria as vital," Kamel said. "There is a prevalent thought among the elite that they will return and re-establish their business enterprises once the war is over."