Scottie dog has a new nemesis in Monopoly after fans voted in an online contest to add a new cat token to the property trading game, replacing the iron, toy maker Hasbro Inc. announced Wednesday. The results were announced after the shoe, wheelbarrow and iron were neck and neck in the final hours of voting. 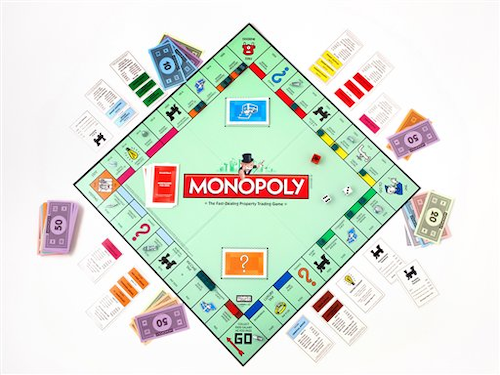 The results were announced after the shoe, wheelbarrow and iron were neck and neck in the final hours of voting that sparked passionate efforts by fans to save their favorite tokens and businesses eager to capitalize on publicity surrounding pieces that represent their products.

The vote on Facebook closed just before midnight on Tuesday, marking the first time that fans have had a say on which of the eight tokens to add and which one to toss. The pieces identify the players and have changed quite a lot since Parker Brothers bought the game from its original designer in 1935.

Other pieces that contested for a spot on Monopoly included a robot, diamond ring, helicopter and guitar.

Fans from more than 120 countries voted.

"We put five new tokens out for our fans to vote on and there were a lot of fans of the many different tokens, but I think there were a lot of cat lovers in the world that reached out and voted for the cat to be the new token for Monopoly," said Jonathan Berkowitz, vice president for Hasbro gaming marketing.

The online contest to change the tokens was sparked by chatter on Facebook, where Monopoly has more than 10 million fans. The initiative was intended to ensure that a game created nearly eight decades ago remains relevant and engaging to fans today.

"Tokens are always a key part of the Monopoly game ... and our fans are very passionate about their tokens, about which token they use while they play," Berkowitz said.

Monopoly's iconic tokens originated when the niece of game creator Charles Darrow suggested using charms from her charm bracelet for tokens. The game is based on the streets of Atlantic City, N.J., and has sold more than 275 million units worldwide.

To make the game relevant to fans abroad, the names are changed to well-known streets in when it is introduced to a new country.

The eight tokens are an iron, racecar, Scottie dog, a shoe, thimble, top hat, wheelbarrow and battleship. Most of the pieces were introduced with the first Parker Brothers iteration of the game in 1935, and the Scottie dog and wheelbarrow were added in the early 1950s.

The social-media buzz created by the Save Your Token Campaign attracted numerous companies that pushed to protect specific tokens that reflect their products.

That includes garden tool maker Ames True Temper Inc. of Camp Hill, Penn., that spoke out in favor of the wheelbarrow and created a series of online videos that support the tool and online shoe retailer Zappos which pushed to save the shoe, Berkowitz said.

"We've even had some companies like Jolly Time Pop Corn reach out and petition to have a popcorn token added to the game, even though that's not one of the new five tokens," he said.

Versions of Monopoly with the new token will come out later this year.