This Week in Food History: An Ode to Oreos

This week in food manufacturing history, we’re looking at the invention of Crisco, the debut of the Oreo and the birth of the man behind the Nestle ​ name. 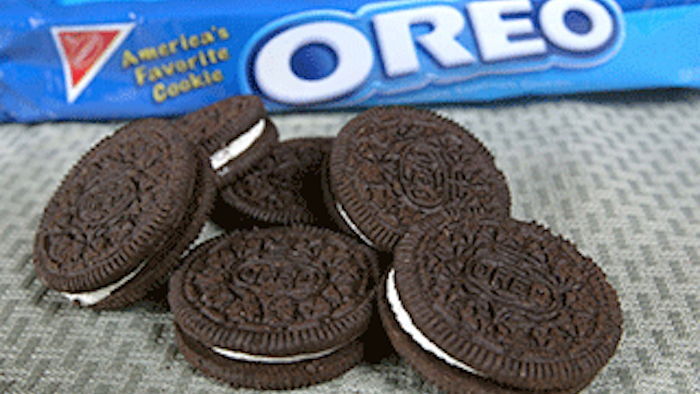 This week in food manufacturing history, we’re looking at the invention of Crisco, the debut of the Oreo and the birth of the man behind the Nestlé  name.

Cooking Up Some Crisco

The company was looking for a way to make hardened soap from fats when they stumbled across a billion-dollar accident instead: Crisco.

The shortening, which is named for its "crystallized cotton seed," was the first solid shortening to be made from vegetable oil for baking and cooking. The hydrogenation ensures that the fat remains in solid form even at room temperatures.

It didn't take too long before Crisco became the cheaper alternative to butter for use in recipes requiring fat. And to this day, it still remains the most popular shortening in the U.S.

But in 2002, J.M. Smucker Co. bought the Crisco brand from Proctor & Gamble and removed all of its trans fats. The company now makes liquid oils and cooking sprays under the same name.

An Ode to Oreos

The National Biscuit Company (better known as its abbreviation Nabisco) registered for trademark of its Oreo cookie on August 12, 1913.

It all began in 1890 when eight large bakeries in New York City combined to form the New York Biscuit Company. Another eight years later, they merged with their competitor to form an even larger conglomerate -- the National Biscuit Company.

In April of 1912, the company introduced three "highest class biscuits," in a grouping they called the "Trio." Two of the cookies, the Mother Goose Biscuit and Veronese Biscuit, didn't last too long as consumers weren't too fond of the products.

The third, however, did. The third biscuit, the Oreo Biscuit, was sold in a yellow tin with a glass cover for about $0.30 per pound (equal to about $7.13 today).

The Oreo's beloved cream filling was apparently made partially of lard (pig fat) until 1997. But at that time, Nabisco had embarked on a nearly three-year revamping process of the filling to take the lard out.

The company's mission was successful, and today the filing is made up of sugar, vanilla extract and non-hydrogenated vegetable oil.

The Nestlé Legend is Born

On August 10, 1814, the founder of what is today's largest food and beverage company was born.

Henri Nestlé was the 11th of 14 children. It is not known exactly when he started working on the infant formula project, but by the year 1867 he was able to produce a viable powdered milk product.

Although he and his wife had no children of their own, it is said that Nestlé's interest of creating a infant formula was due to the high death rate amongst infants in those days. Fresh milk was not always available in larger cities, and women in higher society were starting to view breast feeding as an "unfashionable" option.

So he invented a formula, farine lactee, as a substitute to breask milk for those infants that were unable to breast feed.

He combined cow's milk with grain and sugar to produce the substitute. With the help from a friend and scientist, he also removed the acid and the starch in wheat flour because they were known to be difficult for babies to digest.

It wasn't long before parents quickly recognized the value of the new product, which led the formula to be sold in much of Europe. And by the 1870s, Nestlé Infant Food was selling in the U.S. for $.0.50 a bottle.

In 1875 he sold the company, but the new owners kept the Nestlé name. The company later expanded its products to include chocolate and condensed milk.