What's Better Than Candies in Your Easter Basket? A Life-Size Chocolate Benedict Cumberbatch

How would you like to bite into a life-size chocolate Benedict Cumberbatch this Easter? In a strange stunt to help promote its new Drama channel, UKTV has created a 6-foot, 88-pound doppelganger of the famed actor out of pure Belgian chocolate, giving intense fans just one more reason to drool over him. 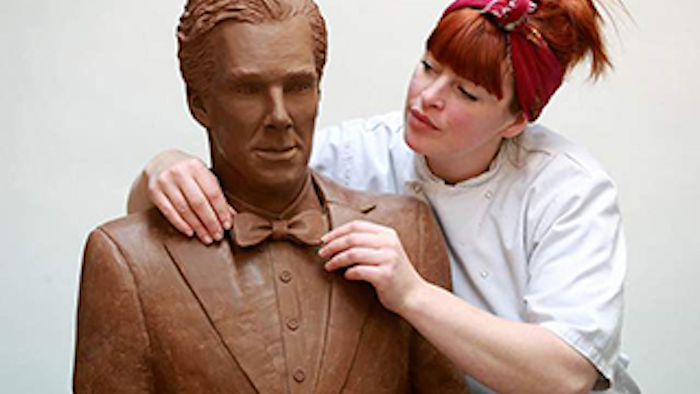 As a child, there truly was nothing better than waking up on Easter Sunday just to ravage the yard looking for my basket full of goodies.

My mom didn't mess around; those baskets were stacked high with only the most sugar-laden and largest chocolates on the market. My favorite? The giant chocolate bunnies nearly half the size of my small body that should have taken weeks to eat, but only took me days (Sorry, not sorry).

In my 25 years of life, I can honestly say there hasn't been many foods in life that can cheer me up quite like those dang calorie-loaded Easter bunnies.

Anyone who is a fan of the T.V. hit series Sherlock, is familiar with the main character Benedict Cumberbatch. He is what some women might call "the tastiest man in TV drama," but now there just might be some truth behind that!

How would you like to bite into a life-size chocolate Benedict Cumberbatch this Easter? In a strange stunt to help promote its new Drama channel, UKTV has created a 6-foot, 88-pound doppelganger of the famed actor out of pure Belgian chocolate, giving intense fans just one more reason to drool over him.

Tim Simpson, one of the eight sculptors of the piece, said the building process was challenging. "The striking thing about Benedict is that he's got quite a thin face but he's got a large head," Simpson told TIME in a recent interview, "So trying to get that look right is quite tricky."

Cumberbatch was chosen by survey, asking 2,000 women to name the tastiest man in T.V. drama.

The Benedict Chocobatch not only took 250 man hours to complete, but took a team of eight people, including a sculptor and a chocolatier.The sculpture will be on display to the public at Westfield Stratford City in London on Friday.

Watch Benedict Cumberbatch get a chocolate makeover in this sweet video: