If you think of the food industry as a wheel, safety is the hub and its spokes are production, cleanliness and labor. The rim tying these spokes together ought to be automation because it can directly improve each one. 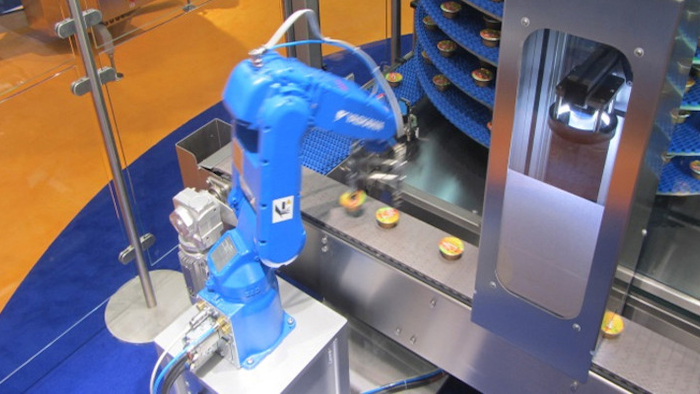 If you think of the food industry as a wheel, safety is the hub and its spokes are production, cleanliness and labor. The rim tying these spokes together ought to be automation because it can directly improve each one. Here’s how:

According to a recent PMMI report, the Food Safety Modernization Act (FSMA), signed into law in 2011, shifts the focus of the FDA from responding to contamination, to preventing food safety problems. Regardless of size, FSMA and today’s economy pose both challenges and opportunities for food and beverage manufacturers.

For example, with beverage production, facilities are now using rotary fillers for soft drinks, wine, milk and water that guide containers single-file into large turrets with more than 100 valves filling bottles in a continuous format. As the equipment gets faster, companies produce more product per shift, and that translates into profit. Of course, speeding up a line means asking your workers to move faster. The famous “I Love Lucy” chocolate scene is a comical metaphor for what can happen when speed outstrips accuracy, but the reality of going even slightly faster can mean damaged or miscounted product. By introducing a robot into the production process, a plant can increase the rate of, say, palletizing or packaging without sacrificing product integrity.

Another impetus for automation is eliminating contamination in plants. The FDA estimates that there are as many as 48 million cases of foodborne illness in the United States each year, which costs the economy billions of dollars1. A law like FSMA can be especially challenging for smaller operations because it requires introducing new processes and added operational costs that small firms aren’t always equipped to take on. With human workers in the line, there is a risk of contaminating food through unclean hands, a lapse in inspection or failure to monitor temperature. With a robot workcell in the production line, ensuring a sterile environment becomes easier, repeatable and recordable. Robots with IP65-67 ratings can be easily washed down or partially submerged for routine cleaning. Although automation adds a capital expense, the payback can come in as little as a year if designed and implemented with forethought.

The third spoke in the food industry wheel is labor — specifically controlling its cost. In manufacturing, workers are often tasked with carrying out repetitive motions. Repeatedly bending over or twisting one’s back can increase the risk of injuries and lead to lost time, retraining and insurance claims. A series of injuries in the same facility can even prompt inspections and involve OSHA.

Recruiting and keeping workers racks up costs, too. Good workers aren’t always easy to find because food manufacturing can involve heavy lifting, working inside a refrigerated room or commuting to a geographically remote area. Even when workers answer a help wanted ad, they don’t always pass employment screening tests. For the workers that are hired and kept on staff, there’s an inherent legacy cost to keeping a full-time employee. This isn’t to say that any facility should be on a mission to replace its human workforce. Rather, automation brings robots in to fill the gaps that stem from recruiting challenges, repetitive or dangerous work, or increasing the rate of work.

There are more than 20,000 food manufacturers in the U.S., ranging from Kraft Heinz to mom-and-pop operations. Regardless of a company’s size, preventing food contamination, maintaining cleanliness, increasing production and protecting workers is paramount.

Because of the structure of the modern food processing and distribution network, one incident of contamination can lead to a widespread incident. That, in turn, can trigger a recall. A recall can tarnish a brand. Even with traceability, which helps manufacturers quickly know where a compromised product came from, manufacturers are still left with contamination if an accident occurs. Minimizing or preventing accidents from spoiled product or cross-contamination become far easier with a robot on the team to keep safety front and center in spite of the circumstances.

1 https://www.fda.gov: Foodborne Illnesses: What You Need to Know