Some of The Coolest Biofuel Stories of The Year (So Far)

Many scientists are on the hunt for that magic, renewable source of fuel that will power us into the future. And despite tumbling oil prices over the last year, the quest for a petro alternative continues. 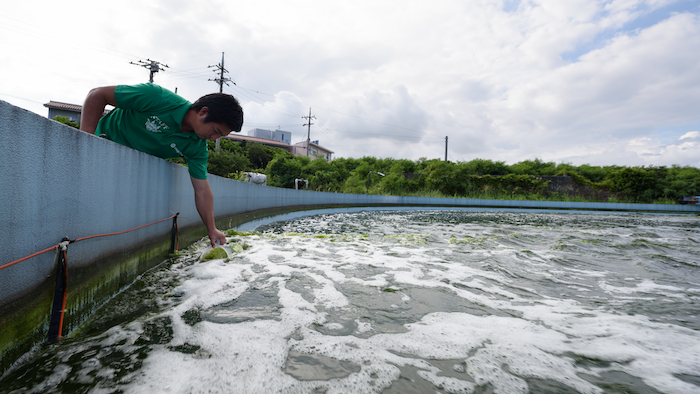 Many scientists are on the hunt for that magic, renewable source of fuel that will power us into the future. And despite tumbling oil prices over the last year, the quest for a petro alternative continues.

It’s always a fun game to see what’s being used to make new fuels — so let’s play it, with a look at some of the coolest biofuel stories to hit the news this year.

Bacterial spores power a “floating engine”: It’s been called one of the weirdest biofuels ever.

Created by a team of chemists, engineers and biologists at Columbia University, this technology uses what’s typically considered a dormant species — bacteria spores — and brings them to life using water evaporation. To achieve this, the scientists deposit the spores on plastic tapes. After the tape is exposed to moisture, the spores expand, causing the tape to lengthen. Once the tape is dried, the spores then shrink it, creating an expanding and contracting movement in the tape similar to how muscles work.

The scientists then use the spore-filled tape to line a wheel that turns as the tape is exposed to moisture and moves between short and wavy, which makes a small vehicle roll.

Here’s a look at a nifty video that shows how they pulled it off.

While the car they powered using this technology is tiny, they say the discovery could open up a whole new way of thinking about biology and powering cars. According to one of the researchers:

When evaporation energy is scaled up, it could one day produce electricity from giant floating power generators that sit on bays or reservoirs, or from huge rotating machines akin to wind turbines that sit above water.

Airplanes powered by poop: With jet fuel as their biggest cost, it’s no wonder major airline companies have been circling the biofuels market in search of cheaper and greener alternatives. A few weeks ago, United Airlines announced it’s making one of the biggest investments ever in aviation biofuels — a $30 million backing of Fulcrum BioEnergy, which makes fuels partially made from animal waste and fats.

United will test the poo-based fuel this summer on short flights between Los Angeles and San Francisco containing about 30 percent biofuel. According to a New York Times report, it will be the first time a domestic airline will operate a passenger jet using any alternative fuel. Why let that waste go to waste?

Brewtroleum, a fuel made from beer by-products: Don’t worry — no beer was lost in the making of this fuel! Created by Gull fuel and DB Export brewer, Brewtroleum is a mix of ethanol extracted from leftover beer-brewing yeast and regular fuel.

This month, drivers in New Zealand got a taste of the fuel at gas stations in its trial run of 300,000 commercially available liters. DB expects that this first batch will last about six weeks, and if the run is successful, the companies plan to brew up more.

According to Gull, Brewtroleum is the first fuel made using brewing byproducts that has been sold on the commercial market and it creates 8 percent less carbon dioxide than regular fuel.

Jet fuel made from pond scum: Japan-based Euglena Co. isn’t the first company to focus its efforts on making fuel from algae, but its star is rising as a leader in the field. The company has already been successful using algae in the nutritional supplement industry, building a business that pulls in $37.8 million a year. Now they’ve teamed up with big-name corporations including All Nippon Airways and a unit of Chevron Corp. to see if they can commercialize a jet fuel made from algae by 2020.

According to a Bloomberg report, the company is also looking at other uses for the algae including cosmetics, medical bandages and fertilizer. But they face major challenges in scaling their product up to mass production, including the higher costs of making an algae-based oil.

Check out this Bloomberg report for more.