You have to hand it to the Greenpeace-led Shell protesters in Northwest. They really know how to put on a show. 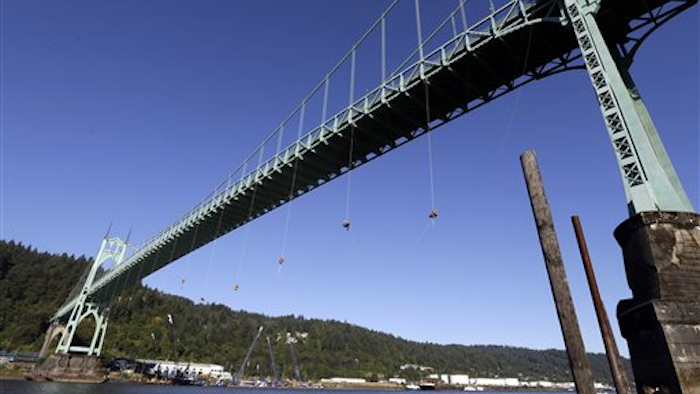 You have to hand it to the Greenpeace-led Shell protesters in Northwest. They really know how to put on a show.

Yesterday, around a dozen protesters rappelled off the tallest bridge in Portland, Ore. to stop a Shell Arctic icebreaker from leaving the city. Shell’s vessel arrived in Portland last week to repair its hull after it was torn open by an underwater obstruction.

The dangling protesters have caused quite the spectacle. Greenpeace reported that they have supplies that will last for days — enough time, Greenpeace hopes, for President Obama to reconsider the permit he recently granted Shell for exploratory drilling in the Chukchi Sea off the coast of Arctic Alaska. The permit from the U.S. government was conditional: To begin drilling, Shell needs to have key safety equipment at the ready in case of a catastrophe. That safety equipment is aboard the MSV Fennica — the vessel the protesters are blocking from leaving Portland.

Which brings us to a bit of irony in the whole affair.

So far, none of Greenpeace’s efforts to stymie Shell have amounted to much more than kayak sing-alongs and drum circle protest parties like the ones seen last May in Seattle’s port. It is truly a David versus Goliath tale and unfortunately it doesn’t look like David has a chance. Shell has already invested billions in its Arctic venture where it’s estimated that there could be 26 billion barrels of recoverable oil. There’s a fat chance that the mega-oil company is going to shrug its shoulders and turn back.

So, if Shell is heading north and the best possible hope is that they drill with as much care to the delicate environment as possible, why hold up their safety equipment?

The MSV Fennica is a vital component of Shell’s spill-response plan. On board is a capping stack that would be used in case a well blowout gushes oil into the sea. It also protects Shell’s fleet from ice.

Personally, I’m not gung-ho about Shell’s Arctic plan. The U.S. already has a glut of oil thanks to fracking, and I agree with enviros pushing for more investments into biofuels.

Shell has also had its share of environmental disasters. Plus, a spill in the Arctic is going to be a nightmare. According to Newsweek: “The Bureau of Ocean Energy Management, of the U.S. Department of the Interior, estimated earlier this year that drilling in the Arctic’s Chukchi Sea could come with a 75 percent chance of a major spill in the next 77 years, based on a model of projected long-term development. A federally funded study from Nuka Research last year found that for 78 percent of the year, cleaning up a spill like that with skimmers and booms would be impossible because of ice cover.”

But, let’s keep it real. The U.S.’s oil glut isn’t going to last forever and biofuels — along with oil from harder to reach places — are undoubtedly going to be a big part of the energy mix in the near future. So best case scenario is that Shell is forced to adhere to the strictest safety regulations possible and held accountable for disasters when they go down.

I mean, it looks pretty peaceful hanging from a colorful Hammock chair over the Willamette River. I wish the Greenpeace danglers the best in this risky, high-flying stunt that will at the very least keep the conversation going about how to drill responsibly. But I also wish Shell well on getting its equipment in place so they can make it the safest journey possible into the North.