Acceptance for medical marijuana as a legit pharmaceutical treatment is on the rise — and so is the budding industry of pot disensaries. 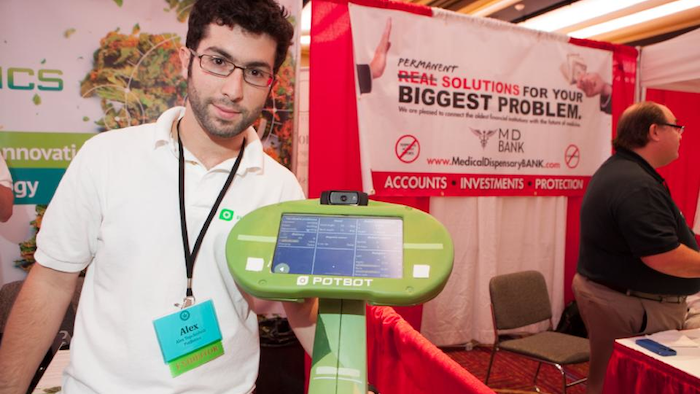 Acceptance for medical marijuana as a legit pharmaceutical treatment is on the rise — and so is the budding industry of pot dispensaries.

But even as marijuana becomes less of a fringe nutraceutical and more of an everyday medical treatment, doctors’ and patients’ understanding about which of the nearly 5,000 strains of cannabis will best help their symptoms is often a bit hazy.

This is where Potbotics comes in.

A startup company that’s found a unique niche in the exploding cannabis industry, Potbotics uses robotic technology to bring medical marijuana use into a new era of high-tech pharma. Their signature product, PotBot, is a robotic kiosk that gives patients a cannabis strain recommendation for treatment by using algorithms based on scientific data, crowd-sourced reviews and store inventory.

Along with PotBot, the company is also in the final testing phase of two other products, including BrianBot, which, according to the company: “…uses an EEG (electroencephalography) helmet that allows general practitioners to capture brain waves and analyze a patient’s neural response to cannabinoid stimulants so that the right strain and cannabinoid level can be recommended.”

In this exclusive interview, Goldstein talks shop on the future of cannabis, and how a sudden health problem in his family inspired him to quit his day job and leap into world of medical marijuana.

Where did you get the idea for Potbotics?
My background is in marketing, so I wasn’t in the cannabis industry. But from a personal standpoint, I saw it benefit to one of my family members. My grandmother had cancer and she had surgery on her knee that required her to take some strong opioids, which reduced the quality of her life. So I started doing a lot of research, and I saw that as a supplement, marijuana could reduce her symptoms. I started looking at the cannabis industry to see what other claims were made.

[Potbotics] is now a father-son company. My dad has a degree in math and was working at NYU doing cognitions testing for patients with Alzheimer’s. While he was doing that research, I came to him with the ambitious goal: I said, ‘You’re doing all these great things to quantify cognitions and I wonder if there was a way to do that with cannabis?’

Why is the technology so important in this industry?
Doctors give you general recommendations, meaning that they can see who medical marijuana would benefit. But then it’s up the dispensaries for the other side of the equation, and the people who work there are not certified in any way to give these recommendations.

The industry is based on ‘strain name’ but that is just marketing and branding — it doesn’t mean anything for medical benefits. So even if patients find a strain is benefitting them, if it’s pulled from the shelves then they’re back in that trial-and-error process. So rather than recommend a strain name outright, we recommend a cannabinoid level — a naturally occurring molecule in marijuana with a specific medical value.

Which ailments do you see cannabis treating the most?
It really runs across the gamut. So if someone’s going through chemo, we’re seeing great results with treating their side effects. It can also treat concussions and epilepsy.

How is the company perceived by the medical community?
What’s interesting is that a lot of doctors tell me they believe in medical marijuana but they would never put their reputations on the line by saying that. I think that’ll change as marijuana goes from schedule 1 to schedule 2 drug. And the federal government actually opens a patent on some of the health benefits on these cannabinoids. As more and more studies come out that helps validate this, I think the culture will change.

How big do you see the medical marijuana industry becoming in the US?
There are some bold estimates out there — and it’s growing rapidly as states adopt more laws to legalize it. One study said by 2020 the medical cannabis industry will at least $8 billion industry. Many people see it outpacing the NFL and the smartphone industry.