Ford Motor Company is a global automotive industry leader, manufacturing or distributing vehicles across six continents. With 175,000 employees and 65 plants worldwide, the company has leveraged the dedication of its employees and UAW partnership to become more efficient, improve its product cadence, and be a more effective automotive industry competitor than ever before. 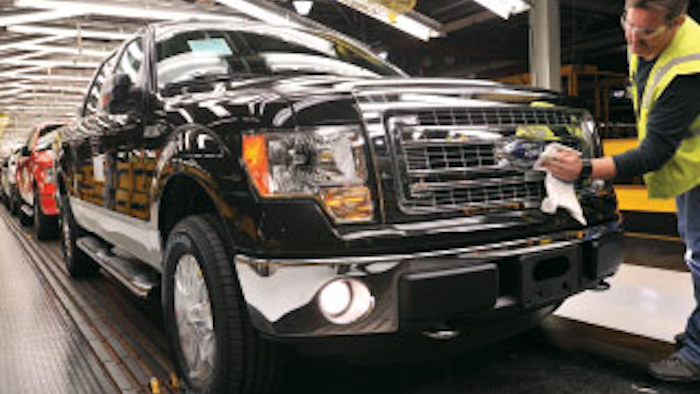 Ford Motor Company is a global automotive industry leader, manufacturing or distributing vehicles across six continents. With 175,000 employees and 65 plants worldwide, the company has leveraged the dedication of its employees and UAW partnership to become more efficient, improve its product cadence, and be a more effective automotive industry competitor than ever before.

Earlier this year, Ford’s Kansas City Assembly Plant announced plans to add more than 2,000 jobs to support growing demand for the Ford F-150 – the best selling truck in America – and the planned American production of the all-new Ford Transit. The Kansas City Assembly Plant is adding a third crew and investing $1.1 billion to retool and expand the facility, and is also celebrating the 65th anniversary of the Ford F-series truck. “Built Ford tough is not a tagline,” says Doug Scott, Ford’s truck group marketing manager, “it’s part of the brand promise.”

The $1.1 billion investment to retool and expand the facility includes a 78,000 square-foot paint shop and a new 437,000 square-foot stamping facility. “That’s new for us,” says Dan Jowiski, Kansas City Plant manager. “We have not been a stamping facility before; we’ve been an assembly facility exclusively.” The plant investment and expansion will also include a new body shop, new tooling in the final assembly area, and an upgraded three-wet paint shop. The bulk of the renovation is in preparation for the Transit Ford’s range of light commercial vans.

To meet the expanded production at the plant, Ford has also had to invest in an expanded workforce — at a time when many are lamenting a skilled worker shortage. But the skilled worker shortage has not been an issue Ford’s Kansas City Plant has been experiencing, says Jowiski: “We’re really pleased at the level of talent that we actually have been finding in the greater Kansas City area.” Many already have the foundational knowledge of their trade, he says, allowing Ford to fine tune their skills and prepare them for applications at the facility, such as the specific robotics in the Kansas City Plant. And with the new jobs in Kansas City, Ford is three-quarters of the way to its goal of creating 12,000 hourly jobs in the U.S. by 2015 — a commitment Ford made with the UAW in 2011. “We have a very close relationship with the UAW,” Jowiski adds. “We consider ourselves partners in the business and everything we do.”

Ford’s Kansas City plant is hiring two types of production staff, Jowiski explains: skilled and production direct. In the skilled areas, Ford is looking for the applicant’s technical background, “what prior experiences have they had within the industry,” and a certain level of skill in the ability to troubleshoot equipment, math background, and logical and analytical skill sets. In the production direct new hires, Ford is looking for applicants with analytical skills and dexterity skills — someone who can safely and efficiently complete Ford assembly work. All new hires start the application process with a four-hour written exam, designed to test their analytical skills and thought process, and see if they’re “suited” for assembly work. Jowiski says, “that’s kind of the initial cut.” From there, applicants undergo a typical pre-employment background check, forty hours of training – including dexterity training with fasteners and power tools – and then partner with an experienced worker “to bring them up to speed on how to perform the work and how to perform it effectively.”

Part of the four-hour exam is designed to “find the right fit for people who are willing to work in a team environment and understand the necessities of meeting our customer demand as well as the high quality standards that we hold for our product for our customer,” Jowiski says. It is designed to find those new hires who will fit into Ford’s company culture, one that he describes as “really, really hardworking.”

F-Series Trucks have been built at the Ford Kansas City Assembly plant since 1957, and, he says, “the folks here are proud to be building the F-150. [It] has a great heritage here.” The Kansas City Assembly Plant is a teamwork environment and utilizes a team structure with team leaders working to support production operators. “They’re resourceful and I’d say it’s a problem-solving group,” says Jowiski. “People work together to build a better F-150 and make a better facility for us, and ultimately the goal is to build the best product for our customers. We work together in coming up with better and better ways to build our F-150.”

“Ford truck has always been about being the most durable and most reliable, and being trucks that can stand up to being overworked and deliver durability,” says Scott. The “secret sauce,” he says, is understanding the customer better than any other automaker, while delivering the best value.

Today, the Kansas City Assembly Plant “literally builds to customer order,” Jowiski adds. And it is able to do that through flexible manufacturing, which he says is really part of the manufacturing best practices at Ford. Each workstation in the facility has an operator interface box that will “literally adjust to the vehicle in that workstation and change the engineering parameters that are necessary for the next vehicle going down the line,” he explains. Whether it’s a different sized suspension system that requires different torques or welding for a Crew Cab with a 6-foot box followed by an 8-foot box, the operator interface will read the unit’s specifications and “then the tool that we use actually adapts itself to that vehicle to get that engineering specification on that particular vehicle.” The operator interface box also provides traceability back to each vehicle. It configures itself to the specific parameters for that specific model mix, Jowiski explains, so that every product can be built to meet specific customer demands.

And part of meeting customer demands is also meeting quality demands and expectations, something not lost on Jowiski as vehicles become more and more sophisticated. Many of Ford’s modern vehicles coming off the assembly line contain on-board computers and mini-computer chips to control everything from the steering system to the windshield wipers — and Ford utilizes “rigorous testing strategies” to exercise and test these modules, he says. “We actually plug-in onboard diagnostics and then perform actual electrical tests on our vehicles to exercise the vehicles and ensure that they are built to our standards.” He adds, “It’s not just inspecting and quality — it’s intrinsically building quality into the vehicle.”

The “Built Ford Tough” brand promise has been in place since 1976, says Scott, and is a commitment to “being the most durable and most reliable product.” But that commitment also includes a commitment to the diverse Ford truck customer, whether it’s a fleet or commercial or retail customer. “We really believe that we know and understand the customer base better than anyone else, and it’s a very diverse customer base.”

“We’re constantly figuring out how to offer or add that feature or the content that the customer demands,” adds Jowiski. “Our product line-up across the industry right now is under three years. To do that, in our manufacturing facilities, we’ve got to figure out how to. Instead of tearing out all the tools we’ve got and installing new tools and starting all over again, we’ve learned how to make the tools last longer, and to stabilize the change, so that we can offer lots of product variance changes in our model mix.”

Every year, the company is offering new features and new options, catering to customer demands and creating a newer, better, safer model. “F-150 has been a leader for 36 years now and to do that, we’ve had to stay ahead of our competition and offer the stuff that our customers want and expect,” says Jowiski. “When we really get it right, we surprise and delight them because they didn’t even know they wanted it or expected it, and once they saw it, they had to have it.” This is a huge change, he says, from the days of mass-producing one model and advertising that one model, offering incentives to convince customers that the one model currently in production was what they wanted. “Now, with the competitive landscape that all the auto manufacturers are in, the customer is king,” he says.

“I just celebrated my 35th year with Ford,” adds Scott, “and I can tell you that the market has never been more competitive — in terms of not only the number of competitors, but how good the products are and how good the competition is in all respects.” With advancing technologies and a greater commitment to deliver the latest and greatest in the industry, this market competition shows no sign of slowing down. “The winners are going to be those who continue to lead and stay ahead and deliver a better value. In the case of trucks — a more productive tool, more quickly and more efficiently than others.”

Alan Mulally’s arrival at Ford in 2006 helped created a unified Ford, adds Scott, and “the whole change in philosophy to leverage our global strength.” Ford’s global success has helped the company rise to among the top American automakers. He cites Transit, which will soon be produced at the Kansas City Assembly plant. The Transit line-up has seen 45 years of success in the European market. “We’re leveraging that global strength more so than ever to become more efficient, help improve our product cadence, and to capitalize on strength that we had in other markets.”

“We’ve had to learn to be nimble,” adds Jowiski. Offering ever-changing product line-ups and a fresh product mix, bringing autos successful in other markets to the U.S. for American production – such as the Transit – has created an industry “that continues to grow and continues to make the products better and better.”

“We’re building exciting products and they’re fresh,” Jowiski says. “that is what customers expect and demand.” And now, he says, Ford is turning its sights to expanding its business and becoming American auto exporters. “We think of the U.S. as being net importers of autos and likely, we still are. However, Ford has really taken on an aggressive stance on exporting a lot of our products, too.” One of two facilities responsible for building the F-150 (the other is in Dearborn, MI), the Kansas City Assembly Plant has grown to be a global exporter. With Transit production, the facility will be the North American lead production site of the new Ford T-series.

Says Jowiski, “for the U.S. auto industry to export around the world is really a game changer for us.”