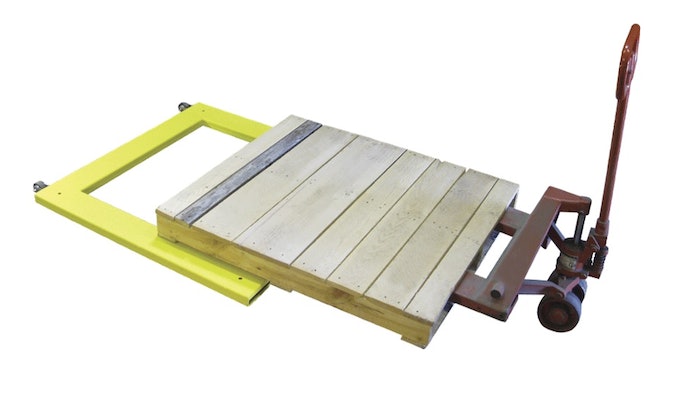 U.S. Toy Company, Inc. operates a 750,000-square-foot distribution center that ships to retail consumers, as well as commercial and wholesale accounts. Changing facility space requirements led to a reduction in truck shipment preparation space. So when Fairbanks Scales, U.S. Toy’s scale service vendor, suggested a new portable U-shaped scale, the company decided to give it a try. The new scale has proven to be faster, as well as safer in terms of ergonomics. In addition, the ability to move the scale to other areas has proven to be a real boon to operations, reducing the total time needed to prepare for shipping.

U.S. Toy Company, Inc.’s Grandview, MO distribution center includes robotic and manual picking areas that ship using parcel, less than truckload (LTL), and full truckload modes. The company reduced the area devoted to shipping as part of an overall facility space reorganization that allowed it to make better overall use of the distribution center. The reductions had a major impact on the LTL department, leaving the area with limited space dedicated to the preparation of truck shipments.

U.S. Toy had one older floor scale, along with about ten table scales for parcel-UPS type shipping. They were not originally in the market for a new scale, but when approached by Matt Barnhill, Fairbanks Scales’ Area Sales Manager in Kansas City, about the company’s new Yellow Jacket U-Shaped floor scale, they decided to investigate to see how the new scale could help them make the best use of every square foot of their shipping area. They were familiar with Fairbanks, since the company has been servicing and calibrating their other scales.

The U-Shaped floor scale, shown in Figure 1 is an alternative to traditional floor scales in manufacturing and warehouse applications where floor space is at a premium. It allows material handlers to capture the weight of standard and non-standard pallets and skids without removing the pallet jack.

The scale is only 2.4-inches tall and does not require a ramp or pit, so installation is fast, economical and easy. Accessories offered include a portable wheel kit and a quick-disconnect cable (between the scale and the readout), these make it very easy to move. The built-in handles, used to move the scale, were specifically designed with optimum comfort and to avoid stress and injury.

At U.S. Toy, the new Yellow Jacket U-Shaped floor scale is used to weigh skids of product in preparation for shipping. “The Fairbanks scale allows us to manipulate space better,” said Robin Simpson, vice president of distribution for U.S. Toys. “It reduces square footage needed for the floor scale, and we can move it around easily, which means we don’t have to clear a definitive permanent space for the scale.”

The addition of an extra scale has been a real boon to their shipping operations, especially during their busy July-August period, when they handle more than the usual number of LTL shipments. Now two people can be put to work with shipments, speeding up their shipping tasks.

While the scale’s compact size was not the feature they particularly sought out, its low profile and ease of movement makes it very accommodating to tight spaces. Simpson says they like the fact that the new scale does not require going through all the motions of going up the ramp, removing the pallet jack, replacing the pallet jack back in and then going down the ramp. She explains, “In the case of a heavy skid, we had to consider the ergonomic factor of the employee tugging the pallet jack up the ramp to the scale, releasing the load, and pulling down the pallet jack off the scale. It is far more ergonomically friendly to just roll in the jack, release the jack and weigh the skid. Employees no longer have to tug it uphill or up an incline.”

The OSHA-friendly Yellow Jacket U-Shaped floor scale can save hundreds of man-hours by eliminating the time required to remove the pallet jacket from the scale to capture the weight. The scale has a 5,000 pound capacity and meets or exceeds the National Institute of Standards and Technology’s specifications, tolerances and requirements for weighing devices.

In addition to these factors, several of U.S. Toys’ operations benefit from the flexibility of being able to move the scale where it’s needed. The large facility is comprised of three buildings and they sometimes need a scale in areas other than the shipping space. For example, they can now bring the U-shaped scale to the receiving area for cross docking, a logistics procedure involving unloading imported containers from an incoming semi-trailer truck and loading them directly into outbound trucks with no storage and without skidding it (weighing for shipping out to a customer).

Another example is use of the scale for special projects, in which they might be preparing pallets for a future shipment. The new scale allows them to bring the scale to that area, versus bringing the pallet to the scale. In the past, products had to be skidded wherever the scale was permanently positioned. This involved using a forklift, bringing products to the scale, weighing them and bringing them back for shipping.

Robin Simpson notes that they believe the scale will lead to significant reductions in weighing time in the future. They intend to conduct more formal time quantification studies once all the employees adjust to the changes the new scale has brought to the shipping area.

“Fairbanks is very customer friendly,” says Simpson. “They set up the scale in a timely manner, calibrated it and came out and worked with us to help employees learn how to use the scale efficiently. They have answered all our questions and we have been very satisfied with the scale.”