Read the story of how a pair of sisters have carried Bales Metal Surface Solutions to success following the sudden passing of their father and company co-founder in 2009. 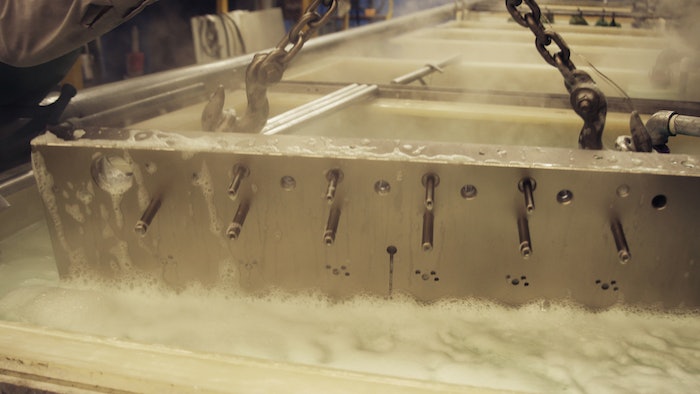 Among manufacturers and within the industry itself, the word legacy is fairly commonplace.

Although perhaps most liberally used when talk of replacing or updating legacy equipment or a legacy method is on the table, the word itself takes on an entirely different meaning for second or third generation manufacturers.

With family owned and operated businesses in particular, legacy extends beyond a company’s day-to-day functionality — it’s much more personal than that. Instead, legacy becomes about memories, family, duty and a desire to honor not just a company’s history but also one’s family history.

Succession planning is part of this equation and something that all second or third generation manufacturers must consider at some point. Oftentimes, this includes measured decision-making about carrying on the company and family legacy, while also bringing in ideas of growth, expansion and even innovation. Most companies (and families) have years to weigh their options and prepare for the inevitable transitions that will follow.

Unfortunately, that isn’t what happened for sisters Stacey and Sara Bales.

In November 2009, Steve Bales – Stacey and Sara's father – unexpectedly passed away. Steve’s death was a shock to his close friends, family and, of course, to all those who knew him as the founder and fearless leader of a thriving coatings and finishing company.

Along with his brother Mike Bales, Steve co-founded Bales Mold Service (the name later changed to Bales Metal Surface Solution), a company that got its start in 1978 in a 1,000 square foot space in Lombard, Illinois. At the time, the only service offered was diamond polishing.

During their father’s tenure, the company expanded in almost every way imaginable.

In 1985, the company moved to Downers Grove, Illinois, after building a new 15,000 square foot facility. With this physical expansion, the company also expanded their services to include electroless nickel and chrome plating.

As the years passed, Steve Bales continued to grow the coatings and finishes business that he and his brother had begun.

In 2001, a second facility was even opened in Harlingen, Texas, which allowed Bales to grow its customer base and, again, increase its service offerings. Four years later, Bales also began planning a 14,000 square foot expansion to their Downers Grove facility.

In 2008 the company had its 30th anniversary. To celebrate, the construction on the facility addition was completed and a state-of-the-art wet chemistry lab was added to the property. That year was sign of the continued growth for Steve Bales and his company.

However, the next year would be fraught with both personal and professional overhauls for sisters Stacey and Sara Bales.

Following the sudden death of Steve Bales and the retirement of Mike Bales in 2009, Stacey Bales (who was just 27-years old at the time) became president while her younger sister Sara Bales Mortensen became vice president.

In a piece co-written by both sisters about three years after their father’s passing, Stacey and Sara talk about what it felt like to unexpectedly takeover the family business.

“We understood the purpose of the business; we were familiar with the services offered and we knew the employees well — they are almost like family … but it never occurred to us that he [Steve] would leave us without warning, without first retiring and having the company set up the way he wanted, and without imparting to us his dreams for the future. But he did.”

Both sisters had been involved with the company from a young age. In particular, Stacey said that she essentially started hanging around the facility since grade school. At the time of their father’s death, Stacey was working in the Downers Grove facility’s office, while Sara would help out when something needed to get done.

“I guess I never really left,” Stacey said. “Things didn’t come to a complete stop after our dad died, but there was definitely a period of shock where we just tried to keep doing what we all already knew how to do.”

Reflecting on the period immediately following their father’s death, the sisters wrote, “We had no succession plan, no blueprint to follow. Hindsight, as they say, is 20/20. We were left to start from scratch, which was difficult.”

Stacey and Sara both admit to times after their succession when they felt like they were just treading water. But they also knew that they were business owners now and that they had a responsibility not just to do right by their father but also to their employees and customers.

Motivated but still weighed down by grief and uncertainty, the sisters knew that it was sink or swim.

“We just we had to make it work,” Sara said. “We were also grateful because our employees and customers really stuck by us in an uncertain time.”

Fueled by their father’s sense of integrity and service, Stacey and Sara eventually settled into their new roles as leaders within the company. After a few years had passed, the sisters began to consider long-term goals and aspirations.

Both Stacey and Sara explain that they had clues about what their father had envisioned to help move the company forward but deciphering these intentions proved to be challenging and frustrating.

Eventually, they realized that they could never definitely know whether Steve Bales had planned to open a third plant or how he had ideally wanted to use their now larger facility at Downers Grove.

“If only dad were here” was a thought Stacey and Sara say they continued to verbalize as more and more discussions about the company’s future began to take place.

But both sisters realized that — even with their father gone — they could still carry on his legacy while also implementing their own unique visions and ideas for growing the family business.

As Stacey and Sara began to immerse themselves more deeply into the industry, they were able to leverage new partnerships and generate ideas on how to improve efficiency, customer service, expand operations and more.

Both felt it was important for the facility to become more energy efficient, which would produce less waste and speak to the company's commitment to a more innovative and resourceful future.

It's been about seven years since the death of Steve Bales. In that time, Stacey and Sara have managed to more than double sales and receive national attention for their exceptional work.

In 2011, the company was a finalist in the “NASCAR Small Business of the Year” award, and it received a “Woman Owned Certification” via the Women’s Business Enterprise National Council.

In 2013, Stacey and Sara were also presented with a “Green Business Award” by the Village of Downers Grove because they were able to transition their facility to a “closed-loop, zero-discharge facility.”

Last year, the company also underwent another major transition: a total rebranding that better signified Stacey and Sara’s bold vision for the future. In addition to unveiling a new logo and an impressive website, the sisters decided it was time to update the business name from Bales Mold Service to Bales Metal Surface Solutions.

Both sisters believe that the revised company name better speaks to the array of services that they now offer and how they are applicable to a variety of different industries.

“Also, we’d always get phone calls asking if we were a mold-removal surface,” Sara jokes. “The new name helps, but we definitely still get those calls sometimes.”

In the same piece the sisters penned a few years after their father’s death, Stacey and Sara wrote, “When our dad and his brother Mike started out they became known to their customers as ‘the Bales Boys.’ Now, we’re establishing ourselves as ‘the Bales Girls.’”

When asked how they feel about being “the Bales Girls” in a male-dominated industry, Stacey said she really didn’t think about it that much anymore.

“I grew up here, so I’ve been used to working with all men on the shop floor,” Stacey explains. “But we’ve worked a lot to change that over the years. We have a lot more women than there ever were before — we’ve finally started to outnumber the men a bit.”

Although there remain times when Stacey and Sara feel uncertain or crave their father’s advice, there’s no question that they’ve inherited their father’s business savvy.

More importantly though, they’re carrying on his legacy of integrity and innovation.