Advanced networking, integration and controls drive the implementation of robots beyond end-of-line applications. 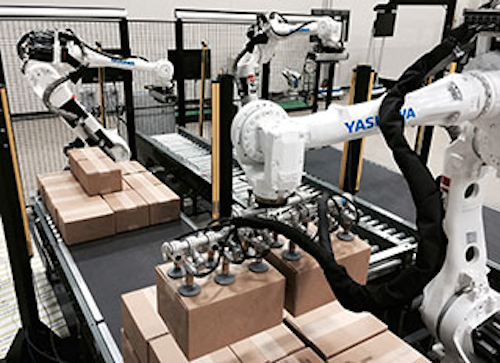 Editor's note: This article originally appeared in the July/August 2015 issue of Food Manufacturing

The use of robotic technologies has long afforded manufacturers the advantages of greater productivity, higher product quality, reduced production costs and labor savings.

Last year’s “Trends in Robotics Market Assessment 2014” from PMMI, illustrated the growth in robotics use. According to the study, 75 percent of end users employed robotics at some point on their manufacturing lines by 2014, compared with only 20 percent in 2008.

Now, robots and their benefits are moving far beyond their early uses in palletizing, working their way upstream into more primary and secondary packaging applications.

Robotics solutions featured at PACK EXPO will reflect the trend towards upstream applications and seamless integration.

Companies are taking two different approaches to integrating robotics into their packaging operations. The “networked approach” implements user-friendly programmable logic controller (PLC) software that sends commands to a separate robot controller. The other approach, favored by machine builders, is a unified control solution, or integrated, model in which one controller handles both machine and robot motion. These multi-tasking PLC platforms tightly coordinate robot movements with the linear motions of conveyors and other moving devices on the line, yielding more accurate and precise product handling. Benefits of the integrated model include greater ease in software programming and reductions in costs and footprints.

When Rockwell Automation analyzed the market, it found that software integration was the number one concern among packaging machine builders and robot manufacturers, says Amy Peters, manager of business planning for Rockwell Automation.

“Customers told us that we needed to tighten our integration. The cost of everything else is relatively small compared to the amount of time it takes to program, diagnose, troubleshoot and integrate at the software level. They want a vendor-agnostic solution that works with all robot brands in the programming environment they are already accustomed to,” Peters says.

In the networked approach, Rockwell Automation’s Logix controller passes commands to a separate robot controller via EtherNet/IP. Customers use the Studio 5000 Logix Designer front-end interface with Add-On-Instructions (AOI’s) and Add-On-Profile (AOP) software to communicate with and configure the robot controller as the ladder logic programming is translated into robot code.

“Manufacturers like this approach because the front-end programming, operator interface and diagnostics are common to the control in the rest of their operations, and operators and maintenance personnel are very comfortable with the Studio 5000 software interface,” Peters says. “The interface makes it look like the robot is being controlled by our controller, but the control is actually being passed over to the robot controller via EtherNet/IP. In addition, the EtherNet/IP network services, for security, safety, energy and time, are common to the rest of their operations.”

While manufacturers have favored the networked approach, machine builders are driving automation technology suppliers to the integrated approach, combining robot and machine controls into one controller. With integrated technology, a single controller will directly manipulate the robot drives and motors.

“Machine builders are driving us to this approach, because it’s easier for system integrators and end users to program and maintain one software package when integrating a robot with a manufacturing line,” Peters says. “Standardizing the hardware and software reduces overall system cost and simplifies what could be very complex systems.”

At PACK EXPO Las Vegas, DENSO Robotics will feature its newest VS series robot. The VS-050 is an ISO 5 clean-roomrated compact six-axis robot. The unit features nickel plating and a design that stands up to harsh sterilizing agents. All DENSO robots use DENSO’s new rack-mount-size RC8 controller with an open architecture for programming in common languages.

The RC8 controller supports the option of robot control through the PLC using Studio 5000 with AOIs and AOPs. Integrators can create their own RC8 programming with general-purpose software such as Visual Basic, C++ or Java for robot control and interfacing, says Mark Anderson, East Coast regional sales engineer manager, DENSO Robotics.

“The packaging industry, in general, doesn’t want to learn a robot controller. They want to know how they can use their PLC to talk with the robot controller without having to deal with proprietary software. With the RC8, they are free to use the language and logic they prefer,” Anderson says.

DENSO’s WINCaps 3 off-line programming software is used to program and layout the work cell in a virtual environment, and then remotely monitor cell operations in real time. CAD drawings are imported to create a 3D simulation for predicting robot performance. An Easy Teach feature replaces keyboard entry and the operator moves the robot by clicking on the surface of the virtual model.

DENSO’s ORiN2 (Open Robot/Resource Interface Network) creates the interfaces between the robot controller and peripherals via a network to integrate vision devices and other peripherals.

“Any general-purpose software can be used to write provider software programs for controlling the communication with a device,” Anderson says.

The ORiN2 contains a provider software program designed to communicate with Cognex software. This allows Denso’s controller to attach to the customer’s controller via Ethernet cable for communicating with the camera. The vision can then be configured using Cognex’s calibration wizard.

DENSO isn’t the only robotic solutions provider aiming to simplify controls. Yaskawa Motoman offers a unified control solution that handles robot programming and control with the same controller that runs the case packing, cartoning or palletizing system. Customers can use one software package with one control system to manage robot motion and configure cam and servo linear motion functions of the packaging line.

“The unified controller becomes a means of eliminating processors and simplifying language, where the robot control becomes a kernel of the overall control solution,” says Elkins.

Yaskawa has deployed Universal Robotics’ Neocortex® ™ artificial intelligence vision solution for depalletizing. The learning software is integrated with and programmed through Yaskawa’s INFORM 3 robot programming software. Drawing from an array of Kinect® sensors, Neocortex software learns and saves data points on box sizes and their positions on a pallet. It then generates a 3-D point model of the box geometry and stores it in the cloud-based solution. The model then guides the robot into position “reporting the off-set difference between a taught point and a seen point,” says Elkins.

The system simplifies destacking in an environment where a variety of cases may be jumbled and off kilter. In identifying any number of stock keeping units (SKUs), the system avoids the need for a complex camera configuration.

“Neocortex gives you product orientation and spatial recognition, so it can determine where something exists in space and help drive the robot to that point. The system can make important software decisions on what cases need to come off the pallet from a priority standpoint,” Elkins says.

Supporting a rapid-cycle time, Yaskawa has assimilated Neocortex with “an extremely tight” software and electromechanical interface, where protocols for communication between the vision source and robot controller allow for “almost instantaneous” response, Elkins says.

“Using ABB’s very powerful robot platform, we have yielded better performance by doing our own programming to avoid constrictions. Our programmers configure an application with EyeQTrak without needing to go into its core,” says JLS Automation President and CEO Craig Souser.

“We want our customers to interface via our HMI to get information out of the system without having to worry about the robot control behind it. Customers tell us they want to leave robot programming to the robot companies. With the high speeds and robot kinematics of our applications, it becomes very restrictive to do all of the processing in one common control. There is no need to generate robot code with our solutions, and in our view, the code is not something customers should touch,” Souser says.

JLS uses PackML conventions to standardize machine state reporting and machine communication with generically consistent HMI layouts. “We are migrating toward compliance with the PackML programming standards; not because we have customers specifying or demanding it, but because it is an existing, standard approach to software templating, which will be a benefit to us in engineering development. More importantly, it benefits our customers,” Souser says.

The integrated Adept robot uses onboard lasers and mapping technology to navigate through a warehouse or manufacturing facility, adjusting its path to move around obstructions.

The gift of vision

Robots are advancing on many additional fronts. Vision sensors give robots the ability to sort by color and enable a variety of nimble end-of-arm tooling. Additionally, OEMs are equipping robots with features to advance spatial awareness, allowing personnel to work safely adjacent to the robots. With no need for additional cages, fences or guards, and the ability to move between locations, these robots add flexibility to operations.

OEMs are pushing the envelope by integrating robotics in new and different ways. For example, the Rockwell Automation iTRAK is a two-axis robot in the guise of a racetrack conveyor in which end-effector paddles on the conveyor control the product in lieu of traditional robot arms. Within Rockwell Automation’s programming environment, motion and movement can be changed on different areas of the line as the robotic units work independently or in coordinated fashion.

“The robot is tightly integrated on the control architecture side as well as the software side so there is no issue with integration and timing between machines,” says Peters.

Robotics will continue to evolve as robot and automation vendors collaborate to meet packagers’ demand for a standard unified control system that is simple, flexible and easy to maintain.