Most US Unemployed Don't Get Benefits: Here's Why

Fewer than 25 percent of those out of work are signed up for weekly unemployment benefits, a near-record low since the government began tracking this data in 1987. That's a sharp turnaround from just after the recession, when as many as three-quarters of those out of work received help, a record high. 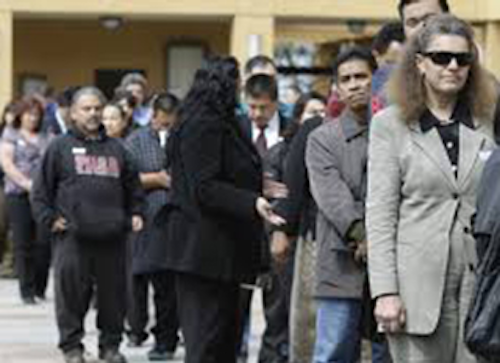 Washingtion — Even though the U.S. job market is gaining strength, there are still a lot of unemployed Americans. Yet only a fraction of them are receiving financial aid from the government.

Fewer than 25 percent of those out of work are signed up for weekly unemployment benefits, a near-record low since the government began tracking this data in 1987. That's a sharp turnaround from just after the recession, when as many as three-quarters of those out of work received help, a record high.

The drop counters a common assumption that most of those out of work receive unemployment benefits. It is partly a sign of an improving job market: Layoffs have plummeted and Americans seem more confident in their prospects for finding a job. But the drop also reflects the fact that state and federal benefit programs have been downsized from where they were just a few years ago. Unemployment benefits had been extended nationwide for as long as 99 weeks in 2009.

"We cut back on the safety net really sharply when the labor market is still damaged," said Josh Bivens, director of research at the Economic Policy Institute, a liberal think tank.

In October, an average of 2.1 million people received benefits each week, according to calculations by the EPI. That is equal to just 23.3 percent of the nearly 9 million who were out of work, and is just above September's 23.2 percent, the all-time low.

On Thursday, the government said 291,000 people applied for benefits last week, the 10th straight week that applications were below 300,000. That suggests the number of recipients will remain low.

The unemployment insurance program is administered and mostly paid for by states. Workers who lose their jobs through no fault of their own are eligible for up to 26 weeks of aid in most states. The weekly checks average about $300.

Here are five things to know about the drop-off in benefits:

— HARDLY ANYONE IS GETTING LAID OFF. If you survived the tsunami of job losses in the Great Recession, you now have pretty good job security. Average monthly layoffs this year and last are running at the lowest levels since the government began tracking the data in 2001. That's helped bring down the unemployment rate to 5.8 percent, a six-year low.

To be sure, job cuts are still a painful reality for many workers. JPMorgan Chase & Co. said earlier this month that it will eliminate another 3,000 jobs on top of 8,000 layoffs that it announced in February. But overall, fewer recent layoffs has meant fewer people receiving benefits.

— THOSE WHO LOSE JOBS ARE MORE CONFIDENT. People are less likely to apply for benefits after a layoff when the job market improves. They may find jobs more quickly, or feel more confident that they will.

Layoffs have remained pretty constant, at very low levels, since early 2013. Yet unemployment benefit applications have continued to fall. Michael Feroli, an economist at JPMorgan Chase, attributes the ongoing decline to the better job market. Employers have added an average of 229,000 jobs a month this year, the healthiest pace in 15 years.

— SMALLER SAFETY NET. A big reason fewer people are receiving benefits is a less happy one: It's because fewer benefits are available. Both the federal government and many state governments have sharply cut back on their assistance to the unemployed. The federal extended benefits program expired at the beginning of this year. That immediately cut off benefits for about 1.2 million people. That also means that the three million people currently out of work for six months or more are ineligible for aid.

And some states have also cut back, citing tight budgets. Eight states provide fewer than 26 weeks of benefits, up from zero states before 2011, according to the EPI.

— MOST DON'T QUALIFY. Unemployment benefits are only available to those who lost a job through no fault of their own. Because laid-off workers make up fewer of the unemployed, the proportion receiving benefits is smaller.

Many of the unemployed are recent college or high school graduates who are now looking for work. Others may have quit their jobs, or they left work years ago to take care of children and are now job-hunting again. People in those categories make up 52 percent of the unemployed, up from 46 percent a year ago.

— MORE HIRING IS NEEDED. Even if layoffs are low, the job market still isn't back to full health. If you are out of work, your chances of getting a job are better but could use more of a boost. Just over 24 percent of those who were unemployed in September found jobs in October, according to Labor Department data. That was the highest monthly figure since the downturn, though still below the average of 28 percent in the decade preceding the downturn.