We recently surveyed Food Manufacturing readers from across all segments of the industry on various trends, topics and considerations when it comes to purchasing plant equipment, and how equipment acquisition meshes with sanitation efforts and existing food safety plans at their facilities. 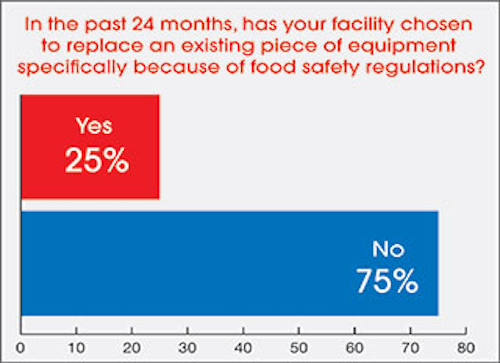 Editor's note: This article originally appeared in the July/August 2015 issue of Food Manufacturing

As food processors add new equipment, implement detection technologies to existing production lines and replace equipment components, they do so with two significant factors in mind: sanitation and food safety.

We recently surveyed Food Manufacturing readers from across all segments of the industry on various trends, topics and considerations when it comes to purchasing plant equipment, and how equipment acquisition meshes with sanitation efforts and existing food safety plans at their facilities.

The majority of respondents (85.96 percent) said they consult with equipment vendors about food safety concerns. Just more than 14 percent indicated they do not.

When asked if equipment vendors help review food safety plans prior to, or after, an acquisition to help with integration of their equipment into their food safety system, 58.52 percent said yes.

The vast majority (83.62 percent) of respondents said their equipment vendors are knowledgeable about the unique sanitary challenges faced by food processors, with just more than 16 percent answering no.