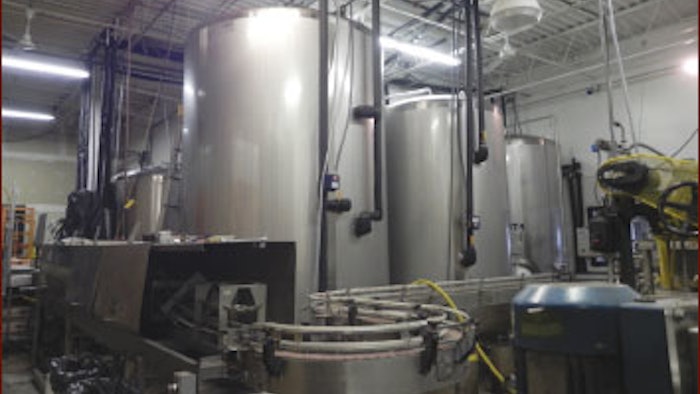 Ale Asylum has quickly outgrown its brewery in Madison, Wis., and will soon relocate to a newly designed facility which offers the potential for a 500 percent increase in brewing capacity.

A report released earlier this year by the Brewers Association notes that sales increased for craft brewers by nearly 15 percent in 2011. For the first time in history, craft beer makes up over 5 percent of the beer market. Though still a relatively small segment of the overall beer market, that 5 percent is important to local beer drinkers and distributors.

Craft breweries, aside from powerhouses like Samuel Adams, are often local or regional businesses. The brewing climate in the Midwest is perhaps indicative of the factors at play for brewers around the country. The Wisconsin Brewers guild reports that about 50 breweries and brewpubs are currently operating in the state of Wisconsin. Tom Porter, owner of Lake Louie Brewing in Arena, Wis., notes that the steady growth of the craft beer segment has been vital to securing distribution deals.

Wisconsin law mandates a three-tiered beer distribution plan, requiring a distributor to play middle-man between brewer and tavern (or grocer). Many small brewers have secured self-distribution licenses in the past, but a provision in last year’s contentious budget repair bill has called into question the future of self-distribution in the state. For Porter, however, where craft brewers were once drowned in a sea of big-name beers, they’ve now become a marquee item.

Distributors “still sell more Coors Light” than they do Lake Louie, according to Porter, but they often have to run promotions or push specials in order to keep orders high for beers with name recognition. “They like us because the profit margins are higher and because we’re growing,” says Porter.

The World Brewing Academy at the Siebel Institute of Technology helps train craft brewers in the art, business and science of beermaking. Its Chicago-area campus boasts hands-on training for students at all levels of experience.

“Students attend our courses from a wide variety of backgrounds. Some are homebrewers looking to enter into brewing; some are already working for breweries of different sizes; some intend on opening their own breweries,” says Keith Lemcke, Vice President of the World Brewing Academy.

And, like any university, the beer world boasts its own fraternal organization, informal though it may be. Otto Dilba, co-owner of Madison, Wisconsin’s Ale Asylum notes the closeness of area brewers and the willingness to collaborate.

“If Tommy [Porter] is running low on hops, he can call us up, and we know that we could do the same if we ever need anything,” he says.

Lemcke notes that “collaborative beers made by two or more breweries” is a growing trend in the craft brewing industry. This collaboration seems emblematic of an industry not afraid to share ideas. From May 4–13, Wisconsin craft breweries like Lake Louie and Ale Asylum are pitching in to launch Madison Craft Beer Week, which will feature Common Thread, a collaboration beer that is, according to event organizers, “brewed specifically for Madison Craft Beer Week by Madison’s own rock star brewers.”

This openness and willingness to share successes comes naturally to brewers, according to Lemcke. “Craft brewing started with homebrewing, and homebrewers teach other homebrewers how to brew. We share information, techniques and even yeast. Craft brewers play nice with other children.”

Looking over the beer landscape, a few macro-trends are emerging. These trends include:

Both Dilba and Porter note the growing trend toward craft beers in cans. Though neither brewery has immediate plans for packaging beer in cans, Porter says that any brewery “not at least looking at cans is going to be in a world of hurt in the next five years.” Porter notes that breweries will continue to produce imperial brews, but maintains that brewmasters would really prefer to make session beers — brews with lower alcohol content.

Tom Porter of Lake Louie chose this filtration process because of its reduced environmental impact.

Porter points to new packaging technologies, which allow cans to be formed and screen-printed offsite, requiring only filling and lidding in craft breweries. This development could put the cost of canning within reach of smaller brewers.

Though bottled beer may hold prestige in the beer industry, cans are sometimes seen as a practical option for consumers — they’re lighter, easily recyclable and can be brought into boats or parks that ban glass. Capturing the “outdoorsman beer drinker” may rely heavily on the ability of small producers to can their brews instead of bottle them.

According to Dilba, Ale Asylum’s recipe for success needs only four ingredients: water, barley, hops and yeast. “Anything beyond that, and you’re not talking about beer anymore. That’s what we’d call a ‘malt beverage.’

“You wouldn’t know it by the way we brand ourselves,” he says flicking at his white-on-black T-shirt, “but we’re really beer purists.”

Ale Asylum is known primarily for its most popular brew, Hopalicious, a very hoppy India Pale Ale (IPA). The company brands itself as hip and young — lots of black, lots of merch, lots of attitude. The combination of simple recipes with an urban sensibility sends the message: beer is fashionable even without accoutrement.

Lake Louie is less in-your-face, and has found success in its own style. Tim Wauters is now the brewmaster for Lake Louie but was once a historian for Chicago’s Museum of Science and Industry. Wauters brings a historian’s eye to the craft of beermaking, and has created some unique brews. Lake Louie’s popular Kiss the Lips — an IPA — is more complex than it may first appear.

IPAs were originally developed in the late eighteenth century in order to provide what were deemed necessary beer rations to British troops stationed in India. A higher alcohol content and extra hops meant added stability for beers, which could then be shipped to India without risking spoilage.

“We don’t do really hoppy beers,” says Porter, “but we wanted to try an IPA, so I said, ‘if we’re going to do this, how would we do it?’” Wauters researched the conditions under which the first IPAs would have been developed — water quality in the region, varieties of hops available — and replicated these conditions as closely as possible to create what could quite possibly be the most authentic modern IPA on the market.

Lake Louie is also experimenting with aqueous ozone technology for sanitation. Long popular with other segments of food and beverage processing such as winemaking, the technology has the possibility to provide superior sanitation with limited environmental impact.

Porter believes that some of the hesitation to adopt the process may stem from beermakers’ fears about oxygen contamination, which can wreak havoc on beer quality. He notes, however, that in ozone form, the element presents no contamination threat. Porter has shared his plans with fellow area brewers, and he says that many are eager to monitor his success with the process.

As craft breweries continue to grow at such a rapid rate, brewers may struggle to keep up with their own success. “So many new breweries have opened up [in Wisconsin] over the last few years,” says Porter, “and I don’t think any of them have failed yet. Some of them most certainly will. But none have yet.” Keeping up with this success will require training and a firm grasp on growth management strategies.

In Arena, Wis., Lake Louie kegs and bottles are held in cold storage, waiting to be picked up for distribution.

Lemcke says, “Students completing our courses who are looking to enter into brewing for the first time are wanting something they can show on a resume that indicates their dedication to understanding brewing technology. It is important to have training given how competitive the market is for brewing jobs. Those already working in brewing use training to advance their brewing careers.”

He notes that one of the major challenges for modern craft brewers is “assuring beer quality while increasing production and shipping beer further from the brewery.” Some brewers, like Lake Louie have chosen to keep growth slow and distribution limited.

Porter says that expansions to the brewery have occurred on a schedule; as new bank loans are approved, the facility’s back wall is knocked out — or a doorway is knocked through it — and additional processing space is added. For much of its existence, Lake Louie was self-distributed, but Porter relinquished his self-distribution license this year amid the uncertainty created by confusing legislation. He hadn’t utilized the license in years, opting instead for distributors that can cover more ground.

Ale Asylum has experienced rapid growth, producing almost 10,000 barrels of beer in 2011 — 9,999, to be exact. The rapid expansion means a very cramped facility that is operating beyond capacity. Later this year the brewer will move into brand new facility, built to accommodate an eventual 50,000-barrel output and up to 18,000 in its first year.

The move, scheduled for summer of 2012, will open up the business for the possibility for state-wide distribution.

The future of beer

Craft brewers see themselves as the scrappy underdog, gaining market share through the sheer quality of their products. This us-against-the-world mentality is likely what brings these brewers together and what leads Porter to call craft brewers “the collective David fighting the Goliath” of big beer. With Anheuser-Busch InBev selling nearly $40 billion in product every year, this attitude is firmly grounded in reality.

As local craft brewers continue to turn out quality beers with attitude and personality, wider distribution deals will likely mean more selections on tap at your local tavern.