Company Indicted for Not Stopping Oil Leak After Many Alarms

U.S. prosecutors said the company and its subsidiaries were negligent six ways. 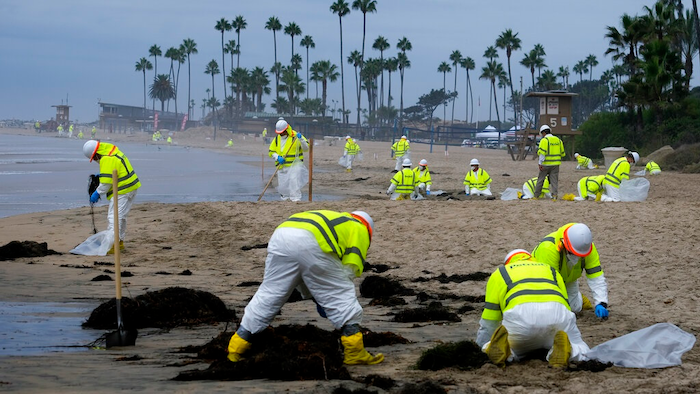 Houston-based Amplify Energy Corp. and two subsidiaries were indicted by a federal grand jury Wednesday on a single misdemeanor count of illegally discharging oil. The companies operate three oil rigs and a pipeline off Long Beach near Los Angeles.

Investigators believe the San Pedro Bay Pipeline was weakened when a cargo ship’s anchor snagged it in high winds in January, months before it ultimately ruptured Oct. 1, spilling up to about 25,000 gallons (94,600 liters) of crude oil in the ocean.

U.S. prosecutors said the companies were negligent six ways, including failing to respond to eight leak detection system alarms over a 13-hour period that should have alerted them to the spill and would have minimized the damage. Instead, the line was shut down then restarted repeatedly, as workers on an offshore platform struggled to determine the leak site and oil kept spewing from the broken pipe miles away on the ocean floor, according to the indictment.

Amplify blamed the unnamed ship for displacing the pipeline. It said company workers on and offshore believed they were responding to false alarms from a malfunctioning system that was signaling a potential leak at the platform, the company said.

“Had the crew known there was an actual oil spill in the water, they would have shut down the pipeline immediately,” the company said.

The Associated Press first reported last week that Amplify’s leak detection system was not fully functional. AP in October reported on questions surrounding the company’s failure to respond to an alarm.

Amplify wants to repair the pipeline over the next several months and plans to start work as soon as Friday, said spokesperson Patrick Creighton.

Federal pipeline safety officials have only approved the first phase of that work: patching the rupture and removing the oil still inside the pipeline, Creighton said. He could not provide an estimate on the volume of crude remaining.

Pending further approvals of its plans, the company wants to remove 282 feet (86 meters) of damaged line and replace it with new pipe. The new section would be covered with concrete mats to protect against future anchor strikes, according to an emergency repair application submitted to the U.S. Army Corps of Engineers.

Miyoko Sakashita with the Center for Biological Diversity, which wants to end offshore oil production, questioned whether the work should be considered an emergency. She said more environmental studies were needed before the line resumes operation.

The U.S. Coast Guard on Thursday conducted an overflight to investigate a reported sheen about a half-mile (0.8 kilometers) off the coast of Bolsa Chica State Beach, in the general vicinity of the October leak.

No impacts were found on the shoreline, where beach cleanup crews remained on standby. Boats used booms to surround the small sheen area. Protection measures were taken at Talbert Marsh, Bolsa Chica ecological reserve and the Santa Ana River, but no oil was observed at those locations.

Orange County Supervisor Katrina Foley told KNBC-TV that a different pipeline under repair had a pinhole leak “and that is possibly the source."

The owner of that pipeline wasn't identified.

The Coast Guard planned to analyze samples of the sheen in coming days to help identify its source.

When the line ruptured, the first alarm went off at 4:10 p.m. Oct. 1, but the leak was not discovered until well after sunrise the next morning and was reported about 9 a.m.

Just days after the spill, Amplify CEO Martyn Willsher had refused to answer questions at news conferences about the timeline surrounding the spill and a report that an alarm at 2:30 a.m. Oct. 2 alerted controllers about a possible spill. He maintained the company didn’t learn of the spill until a boat saw a sheen on the water at 8:09 a.m. that morning.

Orange County Supervisor Katrina Foley said the indictment validates residents who had detected the spill a day earlier and reported it.

“They basically lied to the community during the press briefings and caused people to believe that what they saw with their own eyes or smelled or knew was actually not true,” she said. "The alarms went off like they were supposed to, and nobody did anything.”

Even after the eighth and final alarm sounded, the pipeline operated for nearly an hour in the early morning, prosecutors said.

“The fact that they kept hitting the snooze button and ignoring alarms, stopping and starting this pipeline and all the while leaking oil in the Pacific Ocean is reckless and egregious,” he said.

Prosecutors also found that the pipeline was understaffed and the crew was fatigued and insufficiently trained in the leak detection system.

That points to a long-standing industry problem, said pipeline expert Ramanan Krishnamoorti with the University of Houston.

“Fatigue and overworked staff is old and trite and inexcusable,” he said. “This has been demonstrated over and over again as being the single most important vulnerability.”

It’s not clear why it took so long for the 1/2-inch (1.25-centimeter) thick steel line to leak after the apparent anchor incident, or whether another anchor strike or other incident led to the rupture and spill.

The spill came ashore at Huntington Beach and forced about a weeklong closure of the city’s beaches and others along the Orange County coast. Fishing in the affected area resumed only recently, after testing confirmed fish did not have unsafe levels of oil toxins.

If convicted, the charge carries up to five years of probation for the corporation and fines that could total millions of dollars.