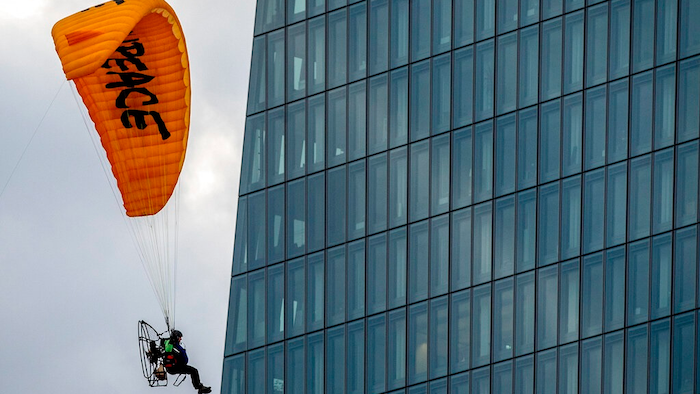 An activist of environmental organization Greenpeace flies with a motorized paraglider past the European Central Bank in Frankfurt, Germany, Wednesday, March 10, 2021. Two activists landed on the roof of a side building and unrolled a banner to protest against the ECB's climate policy.
AP Photo/Michael Probst

Activists used a powered paraglider to reach the roof of the reception building at the ECB's Frankfurt headquarters before unfurling their banner reading "Stop funding climate killers."

Greenpeace said that a recent study showed the bank gives companies that produce large amounts of greenhouse gases better risk ratings, while climate-friendly industries are burdened with a greater margin between the market value of their assets and the value ascribed to it by the ECB.

The ECB confirmed the activists had landed on its roof and said police were called.

“Climate change is one of the greatest challenges faced by mankind this century," the bank said. “The ECB is contributing to the response within its mandate as a central bank, acting in step with those responsible for climate policy.”

The ECB said it was "conducting a review of its strategy which includes an in-depth analysis of how to respond to the climate crisis across all ECB policy areas.”

The bank said earlier this year that it is setting up a dedicated unit to coordinate measures against climate change across its work.