A more extensive review was deemed necessary than the one conducted by the U.S. Army Corps of Engineers. 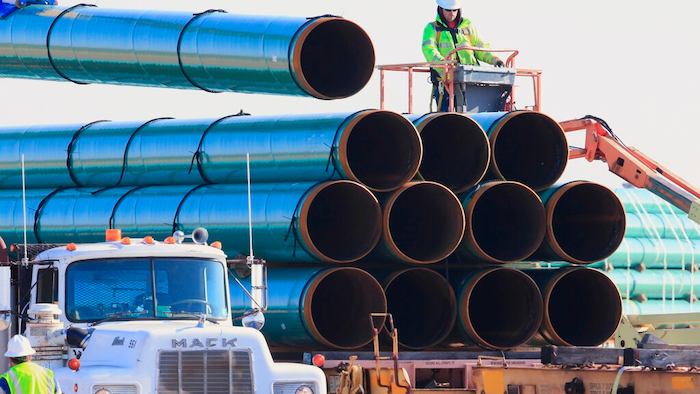 In this May 9, 2015, file photo, workers unload pipes in Worthing, S.D., for the Dakota Access oil pipeline that stretches from the Bakken oil fields in North Dakota to Illinois. A federal appeals court on Tuesday, Jan. 26, 2021, upheld the ruling of a district judge who ordered a full environmental impact review of the Dakota Access pipeline in North Dakota. Following a complaint by the Standing Rock Sioux Tribe, U.S. District Judge James Boasberg said in April 2020 that a more extensive review was necessary than the one already conducted by the U.S. Army Corps of Engineers.
AP Photo/Nati Harnik, File

FARGO, N.D. (AP) — A federal appeals court on Tuesday upheld a district judge's order for a full environmental impact review of the Dakota Access pipeline, but declined to shut the line down while the review is completed.

Following a complaint by the Standing Rock Sioux Tribe, U.S. District Judge James Boasberg said in April 2020 that a more extensive review was necessary than the environmental assessment conducted by the U.S. Army Corps of Engineers.

The $3.8 billion, 1,172-mile (1,886 kilometer) pipeline crosses beneath the Missouri River, just north of the the Standing Rock Sioux Reservation that straddles the North Dakota-South Dakota border. The tribe, which draws its water from the river, says it fears pollution.

“We are pleased that the D.C. Circuit affirmed the necessity of a full environmental review, and we look forward to showing the U.S. Army Corps of Engineers why this pipeline is too dangerous to operate,” Standing Rock Sioux Tribal Chairman Mike Faith said in a statement.

Officials with the Corps and Energy Transfer, which owns the pipeline, have not responded to phone messages left by The Associated Press seeking comment.

The U.S. Court of Appeals ruling does not require the pipeline to stop operating or be emptied of oil, as Boasberg had initially ruled. The appellate court blocked that order last summer.

EarthJustice, an environmental group that opposes the pipeline, said Dakota Access should not be allowed to operate until the Corps decides whether to reissue a federal permit granting easement for the pipeline to cross beneath Lake Oahe. The group said President Joe Biden has the discretion to shut the pipeline down; last week, the leaders of the Standing Rock Sioux Tribe, Cheyenne River Sioux Tribe, Oglala Sioux Tribe, and Yankton Sioux Tribe wrote to the president asking him to do so.

Craig Stevens, spokesman for the GAIN Coalition, a group that supports large infrastructure projects, touted the decision to keep oil flowing and said the pipeline “has safely operated for more than three and a half years, after its developers worked closely with state and federal regulators to meet all permitting requirements.”

The Dakota Access pipeline was the subject of months of sometimes violent protests in 2016 and 2017 during its construction. The Standing Rock Sioux continued to press legal challenges against the pipeline even after it began carrying oil from North Dakota across South Dakota and Iowa to a shipping point in Illinois in June 2017.

The Obama administration originally rejected permits for the project, and the Corps prepared to conduct a full environmental review. In February 2017, after President Donald Trump took office, the agency scrapped the review and granted permits, concluding that running the pipeline under the Missouri River posed no significant environmental issues.

Boasberg later ruled that the Corps had “largely complied” with environmental law when permitting the pipeline but ordered more review because the agency did not adequately consider how an oil spill under the Missouri River might affect Standing Rock’s fishing and hunting rights, or whether it might disproportionately affect the tribal community.