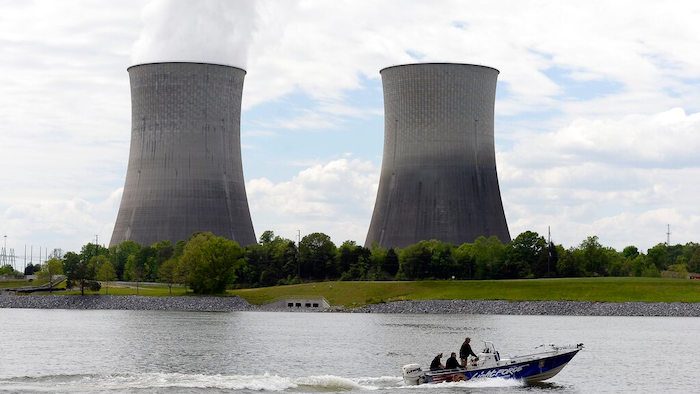 A boat travels on the Tennessee River near the Watts Bar Nuclear Plant near Spring City, Tenn.
Associated Press

Federal regulators have fined the nation's largest public utility more than $900,000 for violating procedures during the startup of a Tennessee nuclear reactor and subsequently misleading investigators. Two managers and a plant operator who worked at the Tennessee Valley Authority's Watts Barr Nuclear Plant in Spring City were also issued violations by the Nuclear Regulatory Commission.

Howard Hall, director of the University of Tennessee's Institute for Nuclear Security, said the notice of violation to TVA points to “a systemic problem in management.”

“As someone who has worked in this field essentially my entire life, I would have been appalled to receive such a letter," Hall said.

In a notice dated Nov. 6, regulators noted a “substantial safety culture issue” at Watts Bar at the time of the incident. They also found that “TVA senior management and staff failed to communicate with candor, clarity, and integrity during several interactions with the NRC during the course of the inspection and investigation.”

According to NRC documents, on Nov. 11, 2015, a shift manager at Watts Bar directed the control room to begin heating up a reactor even though the plant's usual pressurizer system, which keeps the reactor water from turning to steam, was out of service. When trying to heat up with an alternate system, the pressurizer rapidly began to fill with water. Staff then had to “take actions outside of proper operating procedures” to bring the water level down.

The incident wasn't recorded in the plant's logbook and managers later misled NRC investigators about what had happened. The shift manager told investigators he wasn't truthful with them at first because he feared that whatever he said would be relayed back to management. The shift manager has since relinquished his senior reactor operator's license, according to the letter.

The NRC determined that several of the violations were willful, writing that managers allowed “production and cost to override safety."

“The problem is not so much the way TVA handled the startup — it wasn't like we were 30 minutes away from losing Knoxville, or something like that — it's that TVA managers misled or lied to the NRC investigator,” said Dave Lochbaum, a nuclear engineer who has worked with both TVA and the NRC as well as the Union of Concerned Scientists.

The Tennessee Valley Authority serves 10 million people in parts of seven southeastern states, and the Nov. 6 fine is one of several recent actions against the utility by regulators. Last year, the NRC fined TVA $145,000 for submitting incomplete and inaccurate information on a backup system at Watts Bar. Also last year, TVA was ordered to rehire and pay thousands of dollars in back pay and compensation to a whistleblower who raised concerns about nuclear safety. A utility executive who the NRC said played a significant role in that firing was banned from working in any activities that require licensing by the NRC for five years.

In its Nov. 6 letter, the NRC wrote that TVA took actions to address the causes of the 2015 violations but did not “articulate or document broad, comprehensive and substantive corrective actions.”

However, TVA CEO Jeff Lyash said Friday that the problems identified by the NRC are “problems of the past."

“Certainly, you’ve got to keep a focus on it, make sure you never see that creep back in. But I’m very confident that the organization, its culture today, don’t exhibit those same behaviors," Lyash said. “I feel very good about the safety culture going forward. I’m just glad now to have those chapters closing. As the NRC issues their review, including their penalties, we take accountability and we move on.”

The state notified Enbridge that it was revoking an easement granted 67 years ago to extend a section of pipeline through the Straits of Mackinac.
Nov 16th, 2020
Follow Us
Most Recent