The proposed Great Lakes tunnel would be drilled beneath the Straits of Mackinac. 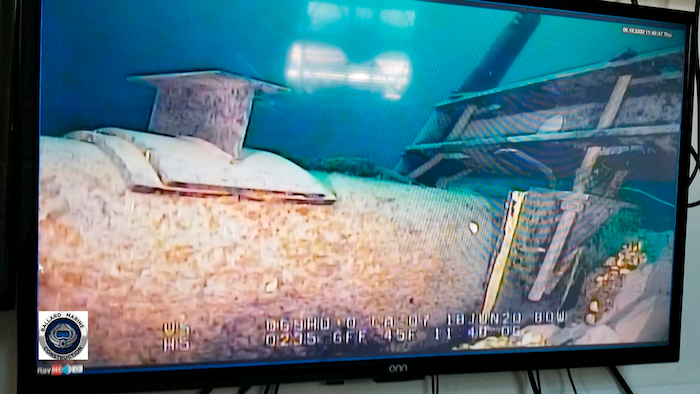 Shot from a television screen provided by the Michigan Department of Environment.
Associated Press

TRAVERSE CITY, Mich. (AP) — Keeping a 64-year-old oil pipeline in operation by running one portion through a proposed Great Lakes tunnel would safeguard the economy and energy supplies, supporters said Monday, while opponents described the project as an unnecessary risk that would contribute to global warming.

The two sides clashed during a public hearing before the Michigan Public Service Commission, one of several agencies that will determine the fate of Enbridge's plan. The Canadian company operates Line 5, which carries crude oil and liquids used for propane between Superior, Wisconsin, and Sarnia, Ontario.

A 6.4-mile segment divides into two pipes that extend across the Straits of Mackinac, which connects Lake Huron and Lake Michigan. While denying critics' claims that they are vulnerable to a catastrophic leak, Enbridge has offered to replace them with a new pipe encased in a concrete tunnel that would be drilled beneath the straits.

The public service commission has jurisdiction over the location of pipelines in Michigan. The panel in June rejected Enbridge's contention that it already had state permission to install the new line because of an easement granted in 1953 when the twin pipes were laid.

Instead, the commission is considering a separate application. It will take testimony for and against the $500 million project and make a decision after final arguments in July 2021.

During the hearing Monday, the plan drew support from representatives of industry and labor groups including steelworkers, convenience stores and petroleum marketers.

"Families and workers are depending on construction of the Great Lakes Tunnel to preserve our natural resources, protect Michigan jobs, and keep energy prices affordable,” Kike Alaimo of the Michigan Chamber of Commerce said in a written statement.

Shutting down Line 5 would choke off fuel supplies to refineries in Michigan and Ohio, cause jet fuel shortages at Detroit Metropolitan Airport and force more shipments of oil by truck and rail, project supporters said.

A recent slowdown of Line 5's flow because of damage to one of the twin pipes' support anchors caused none of the dire consequences predicted by Enbridge and its allies, said Sean McBrearty, representing Oil & Water Don’t Mix and Clean Water Action.

“Planes continue to take off from Detroit Airport, and no refineries in Ohio have been shut down,” he said.

Building the tunnel would require extensive construction work on the shorelines, damaging wetlands and wildlife habitat, while the project would suck millions of gallons of water from the straits and discharge it back into the waterway, said Patty Peek of the Straits of Mackinac Alliance.

Speakers during the online hearing also debated whether the loss of Line 5 would cause propane shortages in the Upper Peninsula.

“In rural areas, propane is the only way to heat your homes — especially in our brutal winters," said Joe Bonovetz, a Gogebic County commissioner.

Anne Woiwode of the Sierra Club countered that a task force appointed by Gov. Gretchen Whitmer had identified other ways to meet the U.P.'s energy needs.

Opponents said building a new oil tunnel was the wrong step at a time when the U.S. should be moving away from reliance on fossil fuels.

“The science is clear that to avoid significantly worsening impacts of climate change, we must rapidly reduce greenhouse gas emissions,” said Kate Madigan of the Michigan Climate Action Network.

Enbridge noted that the Republican-led Michigan House and 24 counties had endorsed the project.

“Placing a pipeline in a new Great Lakes tunnel will provide extra layers of safety and environmental protection and make what is currently a safe pipeline even safer,” the company said.