For some in the local oil sector, bankruptcy is all but inevitable. 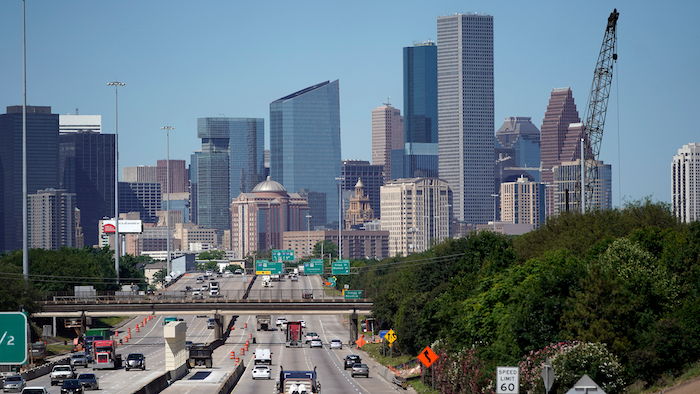 HOUSTON (AP) — When you’re known as the energy capital of the world, oil busts are nothing new. But Houston now finds itself in uncharted territory — grappling with an oil downturn in the middle of a pandemic.

Like in other cities, the coronavirus has shut down much of Houston’s economic activity, slashing thousands of jobs as well as sales tax revenues. Mayor Sylvester Turner expects a city budget deficit of about $200 million, the worst in the history of this city of more than 2.3 million, the country's fourth largest.

At the same time, the price of oil plunged below zero in April as demand plummeted due to the worldwide lockdown to stop the virus' spread. For some companies in the local oil sector — which accounts for a third of Houston’s economy — bankruptcy is all but inevitable.

This one-two punch from COVID-19 and oil prices will make it much harder for Houston to recover from a looming recession, according to economists.

“Tough times have been seen many, many times before and these are going to be particularly tough times,” said Bill Gilmer, director of the Institute for Regional Forecasting at the University of Houston.

Those tough times will also be felt by other local businesses, including restaurants, which are boosted by the energy industry.

“You don’t think a cake maker is going to care about the price of oil. In Houston, they do,” said Jon Rosenthal, who was laid off from his energy sector job during the 2015-16 downturn, when his favorite bakery closed.

For most people, the coronavirus causes mild or moderate symptoms, such as fever and cough that clear up in two to three weeks. For some, especially older adults and people with existing health problems, it can cause more severe illness.

The dramatic drop in oil prices in the wake of COVID-19 has resulted in oil wells being shut down, companies slashing production and exploration budgets and new projects being redesigned or shelved.

Texas produces more than 40% of the nation’s crude oil. Very little drilling takes place in the Houston area, which has more than 237,000 energy workers. The city is instead the hub for the executive and technical talent, including engineers, that manage worldwide drilling projects.

The beating heart of Houston’s oil economy is the Energy Corridor, a white-collar hub of gleaming office towers along Interstate 10 and filled with heavyweights including ConocoPhillips and BP.

While the oil industry was already facing problems before the pandemic, including a credit crunch, Jose Sagaseta thought his job of eight years with an oilfield services company in Houston was safe.

“You never expect you’re going to be the one on those lists,” said Sagaseta, 45, who was laid off in mid-April. “Companies are trying to hunker down ... and going to some survival mode.”

In January, U.S. benchmark West Texas crude was trading at about $63 a barrel. Last month, the cost to have a barrel of U.S. crude delivered in May plummeted to negative $37.63. By Wednesday, the price was at about $23 a barrel. But it would have to rise to $60 to $65 a barrel to be profitable and for lost jobs to come back, Gilmer said.

Elisa Cook and her mother Hilary Trammell were both laid off in April. This is Cook’s third job lost in the decade she’s been in the industry, where her most recent job was performing audits for a company that makes tubular equipment.

“It’s a love-hate relationship with oil and gas because when it’s good it’s good and when it’s not, it’s not,” said Cook, 32.

In a survey by University of Houston researchers from early April, 53% of contacted energy workers said they felt insecure about their jobs.

Sagaseta, who’s married and has two kids, said he’s job hunting while also navigating those days where it feels like things are “doom and gloom.”

Since mid-March, more than 8,200 workers tied to the energy industry in Texas have either been laid off or furloughed, with the majority — more than 4,500 — in the Houston area, according to state filings.

Cliff Vrielink, a Houston attorney who’s worked in the energy industry for 27 years, said some of his clients are debating layoffs. One client is already planning a bankruptcy filing.

The current downturn isn’t expected to be as bad as the 1980s oil bust when the energy, banking and real estate markets fell. The city’s economy is more diversified now.

But the city could lose up to 30,000 energy jobs, said Patrick Jankowski, senior vice president of research for the Greater Houston Partnership, a local business group.

Many energy jobs typically pay twice as much as other local employment and “once you start to cut those jobs out, you are taking a lot of purchasing power out of the economy,” Jankowski said. Oilfield services companies have already furloughed or laid off workers. In the next few months, accountants, geologists and drilling managers will follow, Jankowski said.

“This is a perfect storm event for Houston,” Brown said.