Visitors fled the coast and the seafood industry all but closed temporarily after a BP well blew out, killing 11 rig workers. 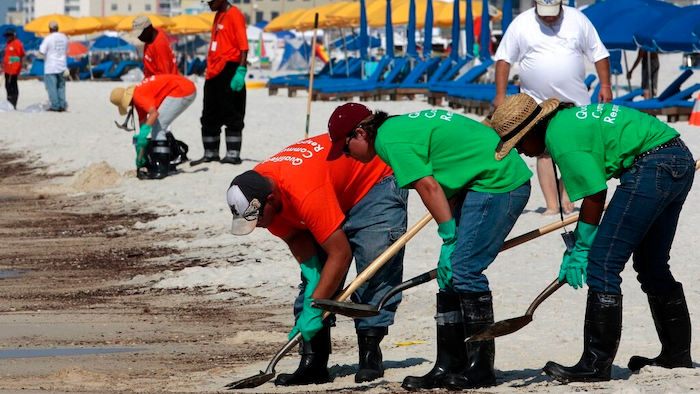 In this June 12, 2010, file photo, oil cleanup workers hired by BP clean oily deposits from the shore in Orange Beach, Ala. The spring of coronavirus feels a lot like the summer of oil to residents along the Gulf Coast. Bars and restaurants are empty in Florida because of an invisible threat nearly a decade after the BP oil spill ravaged the region from the ocean floor up, and condominium reservations have taken a nosedive in Alabama.
AP Photo/Dave Martin, File

The spring of the coronavirus feels a lot like the summer of oil to residents along the Gulf Coast.

Bars and restaurants are empty in Florida because of an invisible threat nearly a decade after the BP oil spill ravaged the region from the ocean floor up, and condominium reservations have taken a nosedive in Alabama. There’s no crude on the sand, just fear and uncertainty over COVID-19, the disease caused by the new threat. Some beaches are closed to limit crowds.

No one is rolling dice or playing the slots in Mississippi’s casinos, which are closed to slow the viral spread, and other businesses are seeing a slowdown. The party has all but stopped in New Orleans, where Bourbon Street is eerily quiet, its bars and nightclubs shuttered for who knows how long.

“The parallels with 2010 are …. I don’t even know if I have the words,” said Tony Kennon, mayor of the tourist-dependent town of Orange Beach, Alabama.

Visitors fled the coast and the seafood industry all but closed temporarily after a BP well blew out and began spewing oil in April 2010, killing 11 rig workers. The sight of oily pelicans, tar-covered beaches and the stench of petroleum in the water gave the coast an apocalyptic feel.

Days of uncertainty turned into months of worry and red ink for businesses and residents.

It was only late last year that Bobby Williams, who runs a 46-foot-long (14-meter-long) charter fishing boat in Gulfport, Mississippi, received his final payment from a BP oil spill claim. He was hoping for a good 2020 until the coronavirus upended everything last week.

Now, with health officials and government leaders telling people to stay home and avoid groups to prevent catching or spreading the virus, it seems the only time the phone rings is when someone else is calling to cancel a fishing trip.

In the French Quarter, New Orleans streets that were full of people for Mardi Gras late last month are now mostly empty. Some hotels are closed and tourist favorites like Preservation Hall are closed, their employees sent home for the duration. Cafe du Monde is still open around the clock, but only for takeout orders.

Just like a decade ago, Bill Brett is concerned about paying hundreds of employees after reservations for the spring plummeted starting last week at his real estate company Brett/Robinson, which manages 3,500 coastal condominiums in Alabama.

“The oil spill was just the Gulf Coast, right? This is the whole country. It will be a long time before this shakes out,” Brett said.

Adrian Holland, who owns a formal wear and bridal shop in Mississippi, said she experienced a downturn in business during the oil spill because of canceled coastal weddings, and she's already seeing less business after high schools called off their spring proms because of the coronavirus.

Still, Holland is hoping for the best.

“Of course we’re seeing impact revenue-wise," said Holland, who operates House of Tux in Gulfport. "But I’m optimistic that it’s going to not be too bad because I am seeing postponements rather than cancellations.”

Some places have faced another problem: Larger-than-normal spring break crowds on beaches despite guidelines to limit gatherings due to the virus. As many as 1,000 young people gathered on a small beach in recent days in Orange Beach, dancing, hoisting drinks and slamming into each other in videos posted to social media.

Shutdowns of bars and nightclubs in Florida helped drive large numbers of young people to Alabama, where only some places closed. Gulf Shores Mayor Robert Craft closed all the city's public beaches until April 6 to ward off the throngs; the state followed through by shutting down all beaches, public and private.

Many of Gulf Shores' roughly 12,500 residents are older and more susceptible to illness, Craft said, and they are worried about encountering students who've not been practicing social distancing in stores and gas stations. Also, he said, city workers shouldn't have to deal with the partiers and risk infection.