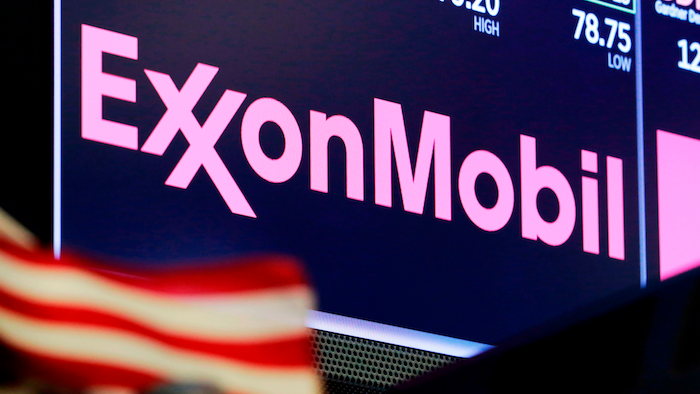 In this April 23, 2018, file photo, the logo for ExxonMobil appears above a trading post on the floor of the New York Stock Exchange.
Associated Press

NEW YORK (AP) — Exxon Mobil on Tuesday outlined how it is reducing the methane its operations release into the atmosphere, detailing its efforts as governments around the globe write new rules to regulate the harmful greenhouse gas.

The oil and gas giant is seeking to influence the way those rules are written, hoping companies and regulators adopt the procedures Exxon says helped reduce methane emissions by 20% in some of its U.S. drilling operations over the past two years.

“Our industry has developed high-tech advances to curb emissions, and we also hope this framework will be helpful for governments as they develop new regulations,” said Darren Woods, chairman and CEO of Exxon, in a statement accompanying a document outlining Exxon's procedures for reducing methane emissions.

Some environmental advocates see Exxon's move as a rebuke of President Donald Trump's Environmental Protection Agency, which in August proposed relaxing regulations on methane emissions. But they also said Exxon needs to be much more aggressive in its efforts to curtail global warming.

“The steps Exxon Mobil has taken and the commitments the company announced are nowhere near sufficient to get us there,” said Kathy Mulvey, accountability campaign director at the Union of Concerned Scientists. “We need to see much more ambitious and urgent actions taken by companies like Exxon Mobil.”

Methane has 86 times the global warming potential of carbon dioxide over a 20-year period, according to the Union of Concerned Scientists. It is the main component of natural gas, and when companies drill for oil, they generally also get natural gas, whether they want it or not. Methane is released in the atmosphere during extraction and distribution of natural gas, and while many scientists agree this is a major problem, there is little data to show exactly how much is leaking into the atmosphere.

Last year, Exxon and other oil giants pushed back the EPA's proposal to relax regulations on methane emissions. At the time, many had already invested in equipment and upgrades to satisfy emissions regulations enacted under former President Barack Obama. Major oil companies are also under pressure from investors to prove they will be able to adapt to future regulations that aim to curtail global warming.

“With the climate crisis upon us, companies can’t afford to ignore their contributions to climate change,” said Ben Ratner, senior director at the Environmental Defense Fund. “In at least one or two parts of (Exxon's methane) framework, what they are recommending appeared to fall considerably short of what would be considered the best available operational practice and regulatory requirements.”

Exxon's model framework included establishing a leak detection and repair program to identify and fix gas leaks as soon as possible, with inspections for leaks happening at least once per year. Some major oil companies are conducting inspections monthly, using sensors mounted on drones, Ratner said.

“The truth is it needs to be much more, and we need to be driving to a world of continuous, real-time monitoring and rapid mitigation of this highly potent greenhouse gas,” Ratner said. “Once-a-year inspection is not a serious proposal for regulatory requirements that are up to the magnitude of the challenge.”

Exxon, which is based in Irving, Texas, said its framework is a starting point for discussions for policy makers, and that governments or private companies could choose to go above and beyond what's presented in the model.

The company also suggested that if an oil and gas operator had to vent natural gas, it would be better to burn it off, or “flare” it, instead of releasing methane directly into the atmosphere. It suggested improving the combustion efficiency of flares so that methane isn't accidentally released as a result of incomplete combustion.

But flaring releases carbon dioxide, and while that is less potent than methane, it lasts longer in the atmosphere.

Widespread flaring in the Permian Basin and other oil fields has been an ongoing problem. Gas flaring activity in the U.S. increased 48% from 2017 to 2018, reaching 1.4 billion cubic feet per day, which is roughly the same amount as the total gas consumption of a medium-sized European country such as Belgium or Romania, according to the World Bank. The surge in flaring happened as natural gas prices fell so low, and pipeline capacity was so constrained, that some producers were paying to have it carted away instead of selling it.

The European Union is a major natural gas importer, giving it leverage to demand much cleaner natural gas, Ratner said. For example, the EU could say that it will only import natural gas with a methane intensity — which measures the amount of methane emissions compared to the total amount of natural gas produced — of 0.2% or lower, Ratner said.

Exxon was also responsible for a major methane leak in February 2018 from a blowout at a gas well in Ohio. The methane released during the incident was reported to all regulatory agencies, a spokesman said.