The plant would have to close in 2030 unless it can demonstrate an 83 percent reduction in carbon emissions through capture and sequestration, a lofty goal. 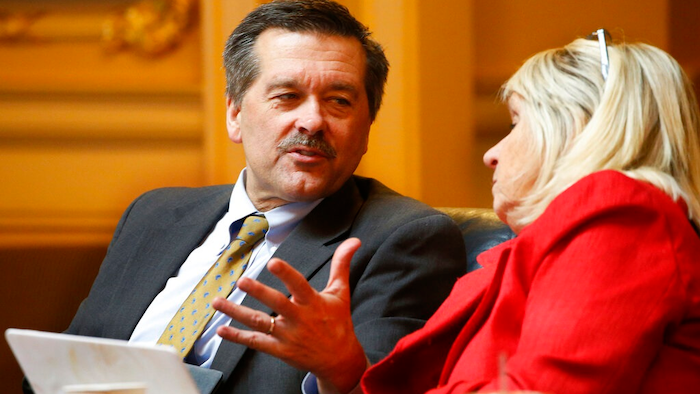 Del. Terry Kilgore R-Scott, left, talks with Del. Kathy Byron, R-Bedford, during the House session at the Capitol Friday, Feb. 28, 2020, in Richmond, Va. Legislators from southwest Virginia have mounted a huge push to oppose the possible early closure of one of the country's newest coal plants.
AP Photo/Steve Helber

RICHMOND, Va. (AP) — Officials from southwest Virginia have mounted a last-minute push to oppose the possible early closure of one of the country's newest coal plants.

A Dominion Energy facility in Wise County that opened eight years ago and is frequently touted as the cleanest of its type could close decades sooner than expected under a sweeping rewrite of Virginia’s energy generation policy Democrats are advancing through the General Assembly.

Advocates of the bill say Virginia needs to move away from fossil fuel-fired generation in order to address climate change. But Republican lawmakers and local officials in southwest Virginia have called its potential early retirement a “tragedy” that would blow a hole in the budgets of two localities and devastate a region that's been working to revitalize an economy built on coal mining but isn't there yet.

“Pulling the rug out from under us and closing down the cleanest coal plant — the cleanest plant in the world right now that’s running — is just a slap in the face to southwest Virginia," Del. Terry Kilgore, a Republican whose district includes part of the county where the plant is located, said in a floor speech.

The plant pays millions in taxes each year and employs 197 full-time and contract employees, according to Dominion. Local officials estimate it supports about 400 other jobs in the surrounding community.

Under the House version of the Clean Economy Act — a measure that would pave the way for an enormous expansion of solar and offshore wind generation plus battery storage — the plant would have to close in 2030 unless it can demonstrate an 83 percent reduction in carbon emissions through capture and sequestration, a lofty goal.

The Senate on Thursday accepted an amendment to its version of the bill to push that deadline back until 2050. The amendment came from Republican Sen. Ben Chafin, whose district includes part of Wise County and who insisted that the plant was “barely out of diapers.” The bills will head to a conference committee that will work out a number of differences, including the closure date.

The Wise County Board of Supervisors has passed a resolution asking the General Assembly to exempt the plant from the bill's requirements. Kilgore, who tried without success to amend the House bill, said he had met with Gov. Ralph Northam to discuss the matter.

“He said he would look at it,” Kilgore said.

Michael Town, who as executive director of the Virginia League of Conservation Voters has played a key role in the negotiations, said Dominion initially offered to close the plant in 2030.

“We of course agreed to their offer," he said.

But Chafin said on the floor that Dominion had spent hours helping him prepare his amendment and “talking pieces.”

Supporters of the legislation say retiring fossil fuel-fired generation is an essential step in moving the state toward a renewable energy future and helping stem the tide of climate change.

“How many years have we wasted since that plant decision was made and put in place?" said Kathy Selvage, a Wise County native and the daughter of a coal miner who helped lead the fight against the Virginia City Hybrid Energy Center more than a decade ago.

The facility was one of the last coal plants built in the United States. Only 10 others have come online since the $1.8 billion facility went into operation in 2012, and only two are currently proposed anywhere in the country, according to the most recent data available from the federal Energy Information Administration.

The plant's advocates have emphasized that the plant is capable of burning gob — which stands for garbage of bituminous — a mining waste product that over the course of decades has been left in more than 100 piles across southwest Virginia.

Environmentalists say that's not reason enough to keep open a plant that emitted more than 3 tons (2.7 metric tons) of carbon dioxide in 2018, the most recent year for which federal records are available, equivalent to the emissions from nearly 600,000 cars driven for a year.

Despite President Donald Trump's efforts to boost the coal industry, utilities are increasingly retiring coal-fired power plants because the dropping prices of natural gas and renewable energy technology have made them less economical. Apart from the Wise County plant, Dominion has previously laid out plans to retire all its other coal-fired power plants by 2025 at the latest.

One of the bill's patrons, Democratic Sen. Jennifer McClellan, said during debate over Chafin's amendment that the plant only operates 25 percent of the time.

A closure would gut the budgets of the town of St. Paul and Wise County, where the plant is located. O'Quinn warned it could send them careening toward bankruptcy.

In Wise County, the plant contributes about $8.4 million out of a $56 million budget, and in St. Paul it accounts for about $2 million out of the $3.8 million annual budget, local officials told The Associated Press.

No matter when the plant closes, Dominion will recover its costs associated with the facility from customers, said Ken Schrad, a spokesman for the State Corporation Commission. The average residential customer is currently paying about $4 a month for the plant.