A 1995 agreement requires all nuclear waste and spent fuel to be out Idaho by 2035. 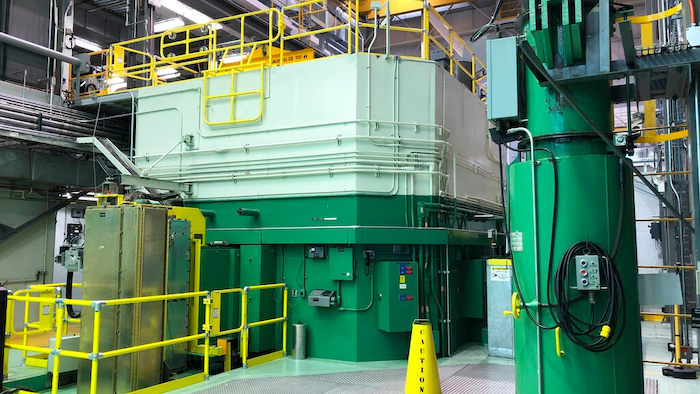 This Nov. 29, 2018, file photo shows the Transient Test Reactor at the Idaho National Laboratory about 50 miles west of Idaho Falls, in eastern Idaho. The director of the Idaho National Laboratory says the U.S. Department of Energy and Idaho will need another supplemental agreement involving spent nuclear fuel so the lab can continue its mission past 2035. Mark Peters on Thursday, Feb. 6, 2020, told lawmakers on the House Environment, Energy and Technology Committee that the 1995 agreement between the Energy Department and Idaho could stop nuclear research.
AP Photo/Keith Ridler, File

BOISE, Idaho (AP) — The director of the Idaho National Laboratory said Thursday that the U.S. Department of Energy and Idaho will have to reach another supplemental agreement so the nuclear research lab can continue its mission past 2035.

Mark Peters on Thursday told lawmakers on the House Environment, Energy and Technology Committee that the 1995 agreement between the Energy Department and Idaho could stop nuclear research.

The 1995 agreement requires all nuclear waste and spent fuel to be out Idaho by 2035. Peters said a supplemental agreement allowing spent nuclear fuel past 2035 will be needed for the lab that in recent years has taken the lead in developing micro and small modular reactors.

"I would say over the course of the next two, three, four, five years that conversation is going need to start to be had,” Peters told lawmakers.

The lab's nuclear research work is part of a strategy to reduce U.S. greenhouse gas emissions by generating carbon-free electricity with nuclear power initiated under the Obama administration and continuing under the Trump administration, despite Trump’s downplaying of global warming.

Idaho Gov. Brad Little and Attorney General Lawrence Wasden, both Republicans, during the last three months have announced two agreements with the Energy Department to help the lab on that mission. The lab is a huge economic driver in the state with about 5,000 employees and millions of federal dollars flowing to Idaho.

Earlier this week, Little and Wasden announced a supplemental agreement to the 1995 deal that makes clear that spent fuel from the Advanced Test Reactor can be kept in a cooling canal at the site past 2023. The reactor helps develop fuel for U.S. Navy warships.

In November, Little and Wasden announced a conditional agreement to the 1995 settlement allowing the Energy Department to bring in research quantities of spent nuclear fuel after the state blocked such shipments for years.

The conditional part of the agreement requires the Energy Department to first prove it can process 900,000 gallons (3.5 million liters) of high-level radioactive liquid waste that sits above the aquifer.

The Energy Department has so far failed to meet that goal. But Peters told lawmakers Thursday that could happen this year.

Little's office didn't immediately respond to an email from The Associated Press.

Wasden spokesman Scott Graf said that office had no comment.

The 890-square-mile (2,300-square-kilometer) Energy Department site that includes the Idaho National Laboratory is about 50 miles (80 kilometers) west of Idaho Falls,

The state's primary concerns addressed in the 1995 agreement are preventing Idaho from becoming a nuclear waste dump, as well as protecting a Lake Erie-sized aquifer that sits below the Idaho National Laboratory and supplies water to farms and cities in the region.

Lawmakers on the committee praised the work being done at the lab, including Democratic Rep. Rob Mason, who works for The Wilderness Society.

“The conservation community has sometimes had some anxiety, as you are well aware, about nuclear power,” he said. “But the world that we live in and the pressure of climate change to the world, to the U.S., to our state, I think this is such a major part of the solution that we can benefit from in Idaho economically.”