The legislation would force taxpayers to buy the struggling utility and turn it into a public entity. 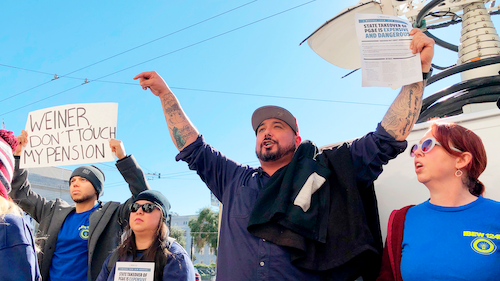 SAN FRANCISCO (AP) — Frustrated by repeated safety lapses at the nation's largest electric company, a California lawmaker on Monday introduced legislation that would force taxpayers to buy the struggling utility and turn it into a public entity with a safety-first mission ahead of shareholder profits.

The proposal follows the bankruptcy filing last year by Pacific Gas & Electric after sections of its sprawling network of power lines were knocked down in windstorms and started wildfires that killed dozens of people and caused billions of dollars in damage.

Since then, the company has intentionally shut off power to millions of people during windstorms to prevent wildfires and avoid liability.

Under the proposed legislation, taxpayers would borrow money to purchase all shares of Pacific Gas & Electric, which has a market value of about $9 billion, and turn it into a public entity subject to open-records laws. Local governments would have a chance to buy pieces of the network to start their own municipal power districts.

“PG&E is a failed company," said state Sen. Scott Wiener, a Democrat from San Francisco who wrote the bill. “PG&E focuses so extensively on pleasing Wall Street and creating returns and dividends for shareholders, it has allowed its infrastructure to deteriorate.”

As part of the bankruptcy case, PG&E is trying to settle claims with wildfire victims, insurers and government agencies for a total of $25.5 billion. Its plan needs approval by Gov. Gavin Newsom and state regulators so the utility can access a key state-mandated insurance fund to help soften future losses from wildfires.

So far, Newsom has rejected PG&E's plan, saying it doesn't do enough to lessen the company's debt so it can afford up to $50 billion of improvements to its electrical grid.

The governor has threatened to take over PG&E if it doesn't make acceptable changes. Wiener's bill is the first glimpse of what a takeover might look like. Wiener's office said it has discussed the bill with the Newsom administration and he has not ruled it out.

“PG&E's facilities are not for sale,” company spokesman James Noonan said. “We remain focused on fairly resolving wildfire claims and existing the (bankruptcy) process as quickly as possible.”

He said other recent takeover attempts of utilities have largely failed due to a range of factors.

Wiener's proposal is modeled after the Long Island Power Authority, which in 1998 borrowed nearly $7 billion to purchase the infrastructure of the former Long Island Lighting Company. However, in 2013, amid escalating debt, the authority was forced to hire an investor-owned utility to manage the electric system, according to a report by Concentric Energy Advisors.

Last week, PG&E pledged to overhaul its board of directors to avoid a state takeover. Newsom's administration has not yet responded to that plan.

Wiener's news conference announcing his bill was disrupted by a raucous group of roughly three dozen people from the local chapter of the International Brotherhood of Electrical Workers. The union represents about 12,000 PG&E employees.

The workers held signs demanding pensions and jobs be protected, and they shouted at Wiener and other speakers, protesting statements that public ownership would make the state safer or lower electric rates.

“People are going to lose their jobs, that’s an absolute guarantee that our workers will lose their jobs and that’s not acceptable,” said utility worker Kristen Rasmussen, 53, of Stockton.

Wiener dismissed the idea of a bureaucratic bungling of a takeover, saying the legislation will protect workers, including their collective bargaining agreements, wages, and benefits.

“You could defend PG&E if you want, but how is that going? They’re burning down entire towns, they are blacking out the power to millions of people," Wiener said. "PG&E is a failure and we need to try something new.”