Pipe Staged Ahead Of Permits For Proposed ND Oil Pipeline 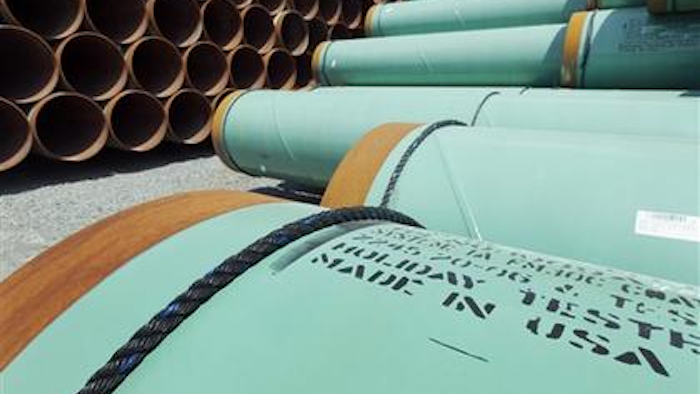 Mountainous piles of steel pipe are being staged across four states in anticipation of building the biggest-capacity pipeline proposed to date to move crude from North Dakota's prolific oil patch.

But stockpiling the pipe is a gamble for the Dallas-based Energy Transfer Partners' Dakota Access Pipeline, a $3.8 billion, 1,130-mile project that still needs approval from regulators in North Dakota, South Dakota, Iowa and Illinois.

"What the company does is at their own risk," said Julie Fedorchak, chairwoman of the North Dakota Public Service Commission.

The three-member panel has signaled its approval of the company's project in North Dakota, the pipeline'slongest leg, but Fedorchak said a final decision is several weeks away.

North Dakota is the nation's No. 2 oil producer behind Texas. It produces about 1.2 million barrels a day, with about half of it moved by rail. Recent derailments and fires involving North Dakota crude — including an explosion in Quebec two years ago that killed 47 people — have drawn criticism from lawmakers and the public about using trains to move oil.

Energy Transfer Partners spokeswoman Vicki Granado said Thursday the company is optimistic the necessary permits will be obtained in all states, with construction expected to start late this year or early 2016. The company, which has the shipping commitments it needs from oil producers, hopes to have the pipeline running late next year.

Granado said so far Energy Transfer Partners has acquired 72 percent of the easements needed along the route, which crosses 50 counties in the four states. The company has said it would use the eminent domain process to acquire other easements if agreements with landowners can't be reached voluntarily.

The company said it has three storage yards in North Dakota, and two each in South Dakota, Iowa and Illinois. Near Richardton, in western North Dakota, pipe began coming to a staging area along Interstate 94 a few weeks ago on mile-long trains, city commission president Frank Kirschenheiter said.

"It's quite a pile of pipe," Kirschenheiter said.

Justin Kringstad, director of the North Dakota Pipeline Authority, said it's not uncommon for companies to stage pipe while still in the permitting process.

"In order to hit a timeline, they absolutely have to get that material ready in advance with the goal of obtaining permission so construction can start immediately," Kringstad said.

He said stockpiling pipe ahead of permits usually works out, but sometimes it can take years for the intended project to occur. For example, he said, Calgary-based TransCanada Inc. has had pipe stockpiled for several years for its multibillion-dollar Keystone XL pipeline, which has been stalled by environmental objections. That project would move Canadian tar sands oil to Gulf Coast refineries, as well as about 100,000 barrels of domestic oil daily from North Dakota.

Ron Ness, president of the North Dakota Petroleum Council, said he believes the Dakota Access Pipeline will be permitted, in part because it will be safer than moving the state's crude by train. The pipeline would replace at least four, mile-long oil trains daily, he said.

"We're confident of the project moving forward," Ness said. "There will always be naysayers but this is a great project and it will improve safety."