GE Introduces Largest and Most Efficient Gas Turbine in the World

Anyone who’s met her will tell you that Harriet is not like other house guests. That’s because Harriet, whose real name is the 9HA, is the largest and most efficient gas turbine in the world.

Anyone who’s met her will tell you that Harriet is not like other house guests.

When she arrived from France in Greenville, SC, earlier this year, her hosts at a local GE gas turbine factory had to build a new train turntable just to get her settled in her quarters. They also erected a gas plant to keep her fed.

That’s because Harriet, whose real name is the 9HA, is the largest and most efficient gas turbine in the world.

Harriet has a cousin, the 7HA, engineered for countries like the United States where electric current oscillates at 60 hertz. GE just announced that it would supply four of them to Exelon, one of the largest power generators in the U.S.

Exelon will deploy them in Texas. The Exelon deal, which... 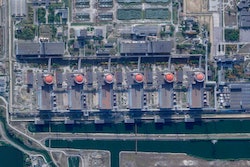 Russia hasn't delivered any gas through Nord Stream 1 since the end of August.
September 20, 2022

President Joe Biden hopes to deploy up to 15 gigawatts of electricity through floating sites by 2035.
September 16, 2022

The country wants to ensure energy security before an embargo on oil from Russia takes effect.
September 16, 2022

Samsung’s plan drew praise from some of its investors, including Dutch pension fund manager APG.
September 15, 2022

The facility has experienced more than 40 environmental and safety problems since 1980.
September 13, 2022

It was operating in “island mode” for several days.
September 12, 2022

They are looking for ways to shield the population from dramatically increasing energy prices that threaten to plunge millions into cold and poverty over the winter as Russia chokes off natural gas supplies.
September 9, 2022

Actor Daniel Craig drank from one its “Picardie” tumblers, with a scorpion on his wrist, when playing James Bond in “Skyfall.”
September 9, 2022

Risky work in fossil fuels has been compensated with higher pay.
September 8, 2022