Iran is ready to buy nuclear power plants from Japan if any proposed sales are accompanied by "lucrative commercial support," according to the head of the Atomic Energy Organization of Iran. 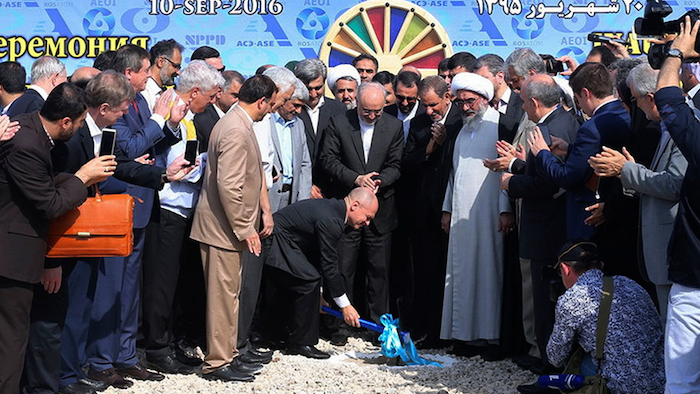 Iran is ready to buy nuclear power plants from Japan if any proposed sales are accompanied by "lucrative commercial support," according to the head of the Atomic Energy Organization of Iran.

"Of course if we receive any suggestion or any proposal from Japan that would sound very interesting to us, we would certainly be ready to enter negotiation in that domain, Ali Akbar Salehi said in an exclusive interview with Kyodo News on Sunday.

But Salehi said Iran has not raised the matter with the Japanese side yet.

"Japan is a very cautious country so we have to wait until things evolve. So we are not in a hurry. Whenever the Japanese are ready, we are ready," he said.

Russia and China have already stabilized their positions as suppliers of nuclear equipment to Iran, which has a long-term plan to produce 20,000 megawatts of nuclear electricity by setting up 20 more nuclear powerplants.

Some European countries "initially have started talks with Iran" in this domain, but no agreements have been reached yet, he said.

After operating a Russian-built and supported 1,000-MW power plant in southern Iran since 2012, and starting construction of two new ones with Russian help, Iran is going to construct new small power plants on its southeastern coast.

"Iran's fourth power plant that we are going to build will be located in the Makran region of southern Iran. Chinese have already visited that region for site selection, but we have not come yet to a final agreement," he said.

According to Salehi, about seven years ago, Japanese officials had shown interest in cooperating with Iran to construct new power plants.

However, international concerns over Iran's nuclear development program led them to adopt a more conservative position of preferring to restart talks after the problems are resolved.

That transpired in July 2015 when Iran finalized a landmark deal with six major powers -- France, Germany, Russia, China, Britain and the United States -- with the aim of limiting its nuclear program in return for an end to crippling economic and banking sanctions.

"Now we have the nuclear deal behind us, but we have not seen any indication as to whether Japan's government or industry (will) enter negotiation with us," Salehi said.

In the meantime, he said, there is still scope for Iran and Japan to expand their cooperation on nuclear safety, specifically the training of Iranian experts in the so-called "3S's" -- namely safeguards, safety and security -- a topic that the European Union is also interested in.

Salehi said "everything is going well in this domain."

Since a memorandum of understanding was signed between Japanese Foreign Minister Fumio Kishida and his Iranian counterpart Javad Zarif in Tehran last October, Iran and Japan have been exchanging experts to increase the level of security and safety at Iran's nuclear facilities.

To that end, Salehi said, "Japan has expressed interest in setting up a 'center of excellence' in Iran on safetyissues and so did the EU...so there may be a trilateral cooperation between Iran, the EU and Japan in this matter."

"We anticipate that we will be learning more than the Japanese learning from us. There is lot we can learn from Japan because they have a lot of experience in running a nuclear plant for so many decades and the very valuable (experiences) that they have accumulated during the unfortunate Fukushima incident," he added.

One of the major advantages Iran gained with last year's nuclear deal was joining the international nuclear market.

Just several months after the deal was inked, Iran was able to sell 32 tons of heavy water to United States. Negotiations on selling the same to Germany, France and Russia are ongoing, with a deal expected to be clinched with the latter.