Two state-owned companies plan to develop floating nuclear reactors, a technology engineers have been considering since the 1970s for use by oil rigs or island communities. 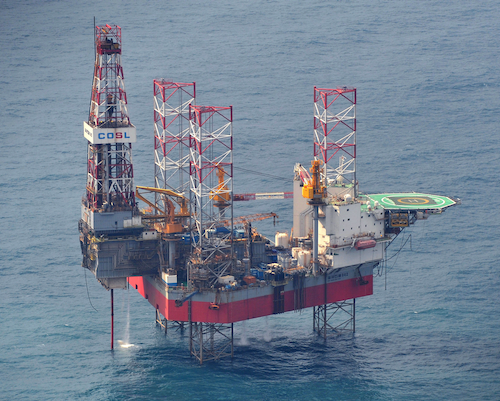 This Feb. 9, 2012 photo shows a China's oil rig operated in the East China Sea. Two state-owned companies, China General Nuclear Power Group and China National Nuclear Corp., have announced plans to develop floating nuclear reactors for use by oil rigs or island communities. If they succeed, the achievement would raise concern the reactors might be sent into harm’s way to support oil exploration in the South China Sea, where Beijing faces conflicting territorial claims by neighbors including Vietnam and the Philippines. (Kyodo News via AP)

BEIJING (AP) — China's ambitions to become a pioneer in nuclear energy are sailing into troubled waters.

Two state-owned companies plan to develop floating nuclear reactors, a technology engineers have been considering since the 1970s for use by oil rigs or island communities. Beijing is racing Russia, which started developing its own in 2007, to get a unit into commercial operation.

In China's case, the achievement would be tempered by concern its reactors might be sent into harm's way to support oil exploration in the South China Sea, where Beijing faces conflicting territorial claims by neighbors including Vietnam and the Philippines. Chinese news reports say plans call for deploying 20 reactors there, though neither developer has mentioned the area.

Tensions ratcheted up after a U.N. arbitration panel ruled July 12 that Beijing's claim to most of the sea has no legal basis. Beijing rejected the decision in a case brought by the Philippines and announced it would hold war games in the area, where its military has built artificial islands.

The floating reactor plans reflect Beijing's determination to create profitable technologies in fields from energy to mobile phones and to curb growing reliance on imported oil and gas, which communist leaders see as a security risk.

China is the most active builder of nuclear power plants, with 32 reactors in operation, 22 under construction and more planned. It relies heavily on U.S., French and Russian technology but is developing its own.

The latest initiatives are led by China General Nuclear Power Group and China National Nuclear Corp. Both have research or consulting agreements with Westinghouse Electric Co. and France's EDF and Areva, but say their floating plants will use homegrown technology.

"They are keen to develop that because they have a lot of oil drilling everywhere in the South China Sea and overseas as well," said Luk Bing-lam, an engineering professor at the City University of Hong Kong who has worked with a CGN subsidiary on unrelated projects.

"The Chinese strategy is to ensure the energy supply for the country," said Luk. "Oil drilling needs energy, and with that supply, they could speed up operations."

Russia's first floating commercial reactor, the Academician Lomonosov, is due to be delivered in 2018, but the project has suffered repeated delays. The Russians have yet to announce a commercial customer.

Russia has been "aiming to launch this idea for over two decades by pitching the reactor as a plug-and-play option for fairly remote communities," said Mark Hibbs, an expert on nuclear policy for the Carnegie Endowment for International Peace, in an email.

Russia's target market was Indonesia and its far-flung islands, Hibbs said. That prompted concern about control over nuclear materials, leading to a recommendation Russia operate the reactor and take back used fuel.

The Chinese nuclear agency signed a deal with Moscow in 2014 to build floating power stations using Russian technology. It is unclear whether that will go ahead given the plans by CNG and CNNC to develop their own vessels.

Chinese developers can count on sales to the state-owned oil industry without going abroad. 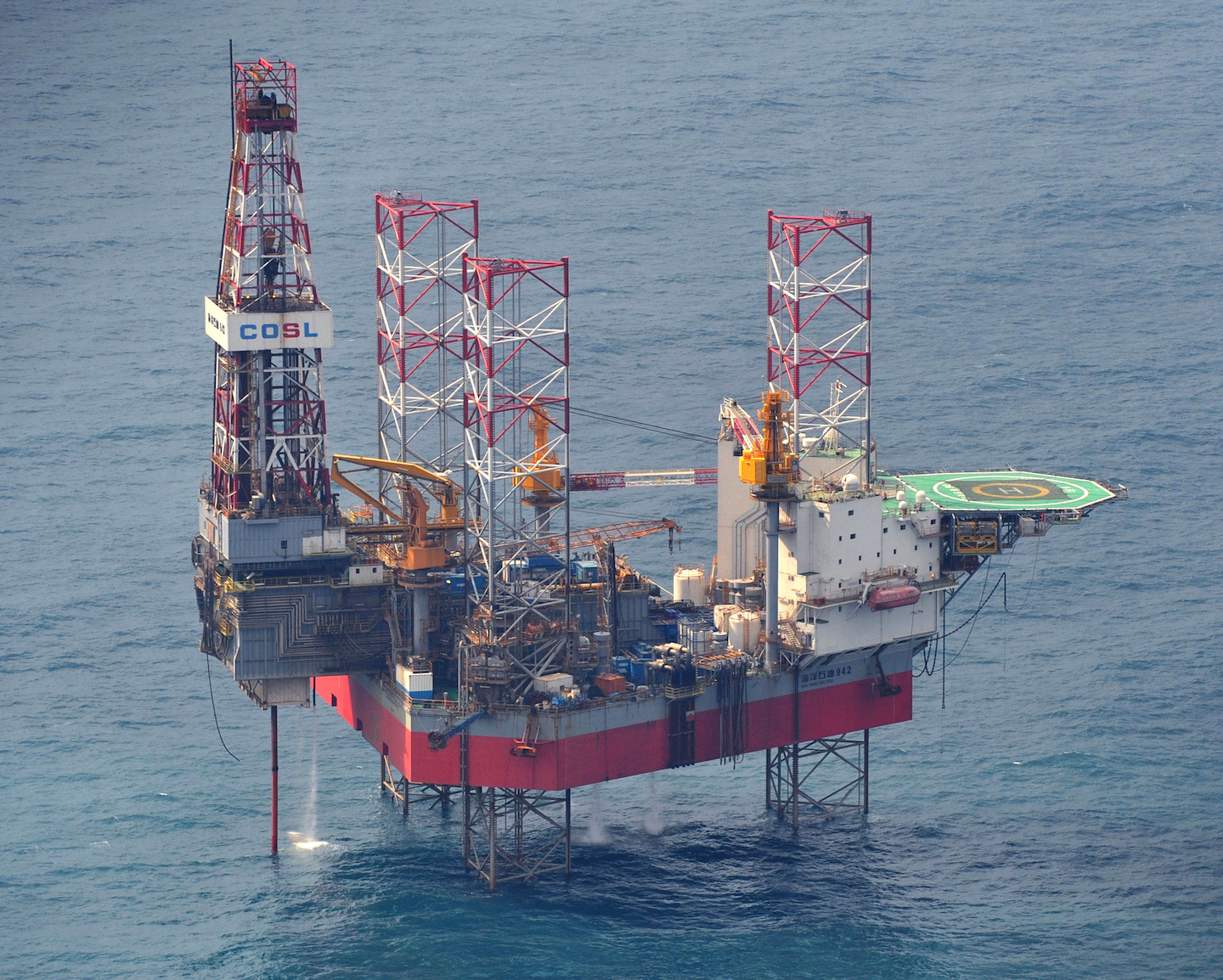 This Feb. 9, 2012 photo shows a China's oil rig operated in the East China Sea. Two state-owned companies, China General Nuclear Power Group and China National Nuclear Corp., have announced plans to develop floating nuclear reactors for use by oil rigs or island communities. If they succeed, the achievement would raise concern the reactors might be sent into harm’s way to support oil exploration in the South China Sea, where Beijing faces conflicting territorial claims by neighbors including Vietnam and the Philippines. (Kyodo News via AP)

CGN has signed a contract with China National Offshore Oil Corp. to support oil and gas exploration at sea. The company says it will launch its first vessel by 2020, with plans for 20 more. It declined an interview request and did not respond to written questions.

CNNC plans a demonstration unit by 2019.

A floating nuclear plant probably would be too costly just to supply power but could be useful in oil and gas exploration by also providing heat and fresh water, Luk said. He said CGN engineers told him their design is meant for islands or other remote sites.

Tensions with Vietnam have flared over Chinese oil and gas exploration near the Vietnamese coast. In January, Vietnam complained a Chinese oil company had towed a drilling rig into disputed waters. In 2014, the same rig was parked off Vietnam's central coast for two months, leading to violent anti-Chinese demonstrations and confrontations at sea as Chinese vessels rammed Vietnamese boats to prevent them from approaching the rig.

Reactors have been used on warships since the 1950s. But those vessels regularly visit port for maintenance and face little security risk because they are heavily armed.

"The security concerns are clear: such reactors would be tempting targets for military or terrorist attacks," Edwin Lyman, a nuclear specialist for the Union of Concerned Scientists in Washington, said in an email. "Maintaining the full contingent of security officers necessary to effectively deter attack would not be feasible."

Other perils include stormy seas — the South China Sea is buffeted by powerful seasonal typhoons — and the need to exchange radioactive fuel at distant sites.

CGN says its seaborne unit will have "passive safety," or features that function without moving parts or outside power, such as control rods that drop by gravity in an emergency. No commercial reactor operates with such features.

"There are questions about how reliable passive safety systems will be in extreme conditions," Lyman said.

CGN wants to simplify operations by requiring refueling only once every three years instead of the industry standard of 18 months, Luk said. That would require more highly enriched fuel, with the amount of the U-235 isotope raised to as much as 10 percent from the typical 4.5 percent.

"If it were seized by terrorists or someone else, that would be a big problem," he said.

In April, a Chinese-born American engineer employed by CGN was charged with recruiting experts in the United States to help the company with reactor construction without applying for required government permission. Allen Ho, also known as Szuhsiung Ho, also was charged in federal court in Tennessee with acting illegally as an agent of a foreign government.

Under a 2007 agreement, Westinghouse transferred to another government company, the State Nuclear Power Technology Corp., technology for its latest model, the AP1000. It was to become the basis for future Chinese reactors that could be sold abroad, but CGN and CNNC pressed ahead with development of their own models.

CGN says its 60-megawatt floating reactor, the ACPR50, is a version of the land-based ACPR100 reactor. CNNC says its seaborne unit will be based on another reactor, the ACP100, but has released no other details.

Westinghouse has no role in the ACPR50's development, according to a company spokeswoman, Courtney Boone. EDF and Areva did not respond to requests for information about their possible role.