A coastal Louisiana parish on Thursday voted to drop its lawsuits against oil and gas companies over damages officials had said the oil industry caused to wetlands by digging numerous canals. 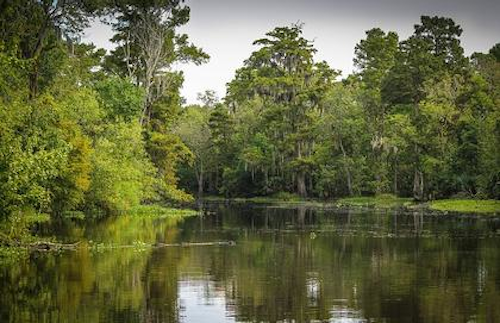 NEW ORLEANS (AP) — A coastal Louisiana parish on Thursday voted to drop its lawsuits against oil and gas companies over damages officials had said the oil industry caused to wetlands by digging numerous canals.

The Plaquemines Parish council voted to dismiss 21 suits it had pending against 68 oil companies, officials and a lawyer said. The vote took place at a meeting in Pointe-a-la-Hache.

The council's move was a blow to environmentalists and others who have argued for years that the oil and gas industry should be forced to pay for damage to wetlands. Business groups and oil field workers, meanwhile, hailed the vote as a victory.

Similar suits filed by neighboring Jefferson Parish and by a board overseeing flood protection surrounding New Orleans are still alive.

The suits have been the subject of intense debate in a state with deep ties to the oil industry but which is also grappling with catastrophic coastal land loss — an estimated 1,900 square miles of coast since the 1930s. The suits have been viewed as a step in making the industry pay for some of the work needed to fix the coast.

Darryl Malek-Wiley of the Sierra Club in New Orleans alleged that new council members in Plaquemines Parish were wooed by oil and gas companies into voting against the suits. He said recent elections in the parish saw a flood of campaign donations from the companies.

"Once again it shows the power of the oil and gas industry over the interest of our coastal wetlands," Malek-Wiley said.

He charged that canals dug to access and transport oil and gas in Plaquemines have caused extensive damage to wetlands across Louisiana's coast.

That's not the case, according to Nicole Williams, a council member who voted to dismiss the suit.

"None of us in this room knows who caused the damage to our coast and it is our duty to do what is right for the people of Plaquemines Parish," Williams said at the meeting, according to a parish statement.

Scientists generally agree that oil drilling and digging canals are among the causes of the state's coastal land loss. Other causes include building levees on the Mississippi River, natural subsidence, hurricanes, logging and shipping.

Business groups called on other political leaders to kill similar suits against the industry.

Victor Marcello, a lawyer who sued on behalf of the parish, said the council appeared to want to dismiss the suit not based on its legal merits but because of concerns the suit is having a chilling effect on the oil and gas industry's growth in the parish.

"The folks down there felt that the lawsuit was affecting their jobs," he said. But he added that the drop in the price of oil and not the suit was more likely a cause for any economic slowdown in the parish.

The vote was 5-1, with two members abstaining.