China is coming to a crossroads as it hurriedly increases nuclear power production to cope with rising electricity demand and cut carbon emissions: Should it reprocess its nuclear waste or store it? 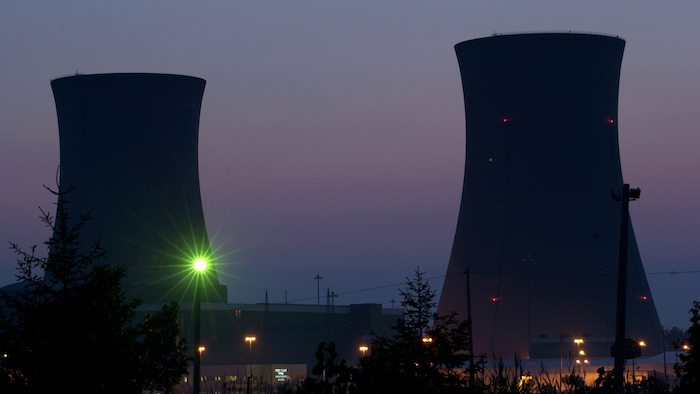 WASHINGTON (AP) — China is coming to a crossroads as it hurriedly increases nuclear power production to cope with rising electricity demand and cut carbon emissions: Should it reprocess its nuclear waste or store it?

The study says China could save tens of billions of dollars by storing the spent fuel, and the savings could be spent on research and on building nuclear reactors. It recommends postponing major investments in reprocessing and so-called "breeder" reactors that produce more plutonium than they consume.

"China has the luxury of time, as it has access to plenty of uranium to fuel its nuclear growth for decades to come, and dry casks can provide a safe, secure, and cost-effective way of managing spent fuel for decades to come, leaving all options open for the future," the study says.

China has aimed for a "closed" nuclear cycle — recycling reactor fuel instead of using it just once and disposing of it — since the early 1980s. The State Administration of Science, Technology and Industry for National Defense told The Associated Press that remained China's policy, to enhance its use of uranium resources and to cut production of nuclear waste.

But the numbers of countries that do reprocessing has dwindled, because of the high costs, technical difficulties involved and the growing availability of uranium on world markets. While reprocessing reduces the level of radioactivity in nuclear waste, The Union of Concerned Scientists — an advocacy group that was founded by scientists and students at the Massachusetts Institute of Technology — says it does not reduce the need for storage and secure disposal of waste.

Some within China's own nuclear establishment are also questioning the merits of reprocessing as the nation mulls huge capital investments in the sector, U.S.-based experts say.

One of the three authors of the Harvard study is Li Kang, who works within the China National NuclearCorporation that oversees civilian and military nuclear programs. The preface says Li's contribution was primarily in making cost estimates based on China's experience and that he should not be held responsible for arguments in other sections of the study — which, for example, highlight the costly experience of nations such as Japan in pursuing reprocessing. The other authors are Matthew Bunn, a former White House adviser and expert at Harvard's Kennedy School of Government, and Hui Zhang, who heads the school's research initiative on China'snuclear policies.

Henry Sokolski, executive director of the Washington-based Nonproliferation Policy Education Center, said that Chinese nuclear experts who "care about making sure China's nuclear power program stays on schedule and safe are genuinely concerned about how financially, technically, and diplomatically risky recycling plutonium is." Sokolski, a former U.S. defense official, has written extensively on the risks of rising stocks of fissile material in East Asia.

China already has the world's fastest-growing nuclear energy program as it strives to double current atomic power output from the current level within five years — a key element of its commitment to produce 20 percent of its energy from low-carbon sources by 2030.

China has some experience with reprocessing. It previously produced plutonium for military uses, and in 2010 completed an experimental reprocessing facility for its civilian program at an adjacent site. The facility ran for just 10 days before shutting down because of technical problems.

According to Zhang, China has started site preparation for a new reprocessing facility using its own technology, and is considering a separate, much larger $21.7 billion reprocessing plant with the French state-run nuclearcompany Areva. China is also considering taking a minority stake in the company.

China is an important market for the world's nuclear industry giants, including the United States. The U.S. last year eased restrictions on its civilian nuclear cooperation with China to allow the reprocessing of fuel from U.S.-designed reactors for nonmilitary purposes — similar to the arrangement the U.S. has with its close ally Japan.

Some U.S. lawmakers say that could lead to spiraling quantities of fissile material in the region. China itself has strongly criticized Japan, which opposes nuclear weapons, for stockpiling enough separated plutonium in-country for more than 1,300 bombs. Japan has many tons more of plutonium stored overseas.

China may want to note Japan's experience with reprocessing. Its plant, built with Areva, has been more than 20 years in the making and has been plagued by delays and cost overruns.

The Harvard study also notes that in the wake of the Fukushima Dai-ichi reactor meltdown in Japan in 2011, "Chinese citizens are increasingly in favor of renewable energy."

Japan's reactors have been offline since the accident. It recently postponed until 2018 the reprocessing plant'sopening to allow for more safety upgrades and inspections.